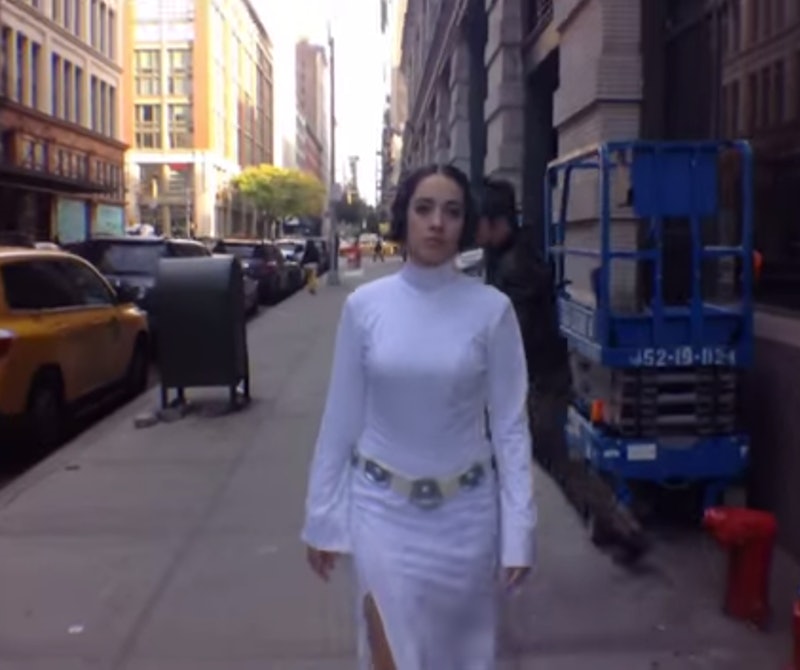 Ever since the world got a look at the Hollaback street harassment video of one woman subjecting herself to 10 hours worth of catcalls in New York, there have been serious discussions about catcalls, important debates about what to do about street harassment, and also plenty of parody videos because it's the Internet age, OK? In the latest parody, we get to see what it's like when Princess Leia walks around New York City getting catcalled for 10 hours. And it's enough to make fans of the original Star Wars trilogy laugh out loud.

In the video, which mirrors the original pretty closely, Princess Leia encounters Star Wars characters of every stripe, everyone from jawas to Darth Vader himself, all of whom feel the need to talk to her — using only dialogue from the original trilogy, of course.

As hilarious as the video is, it is probably important to remember that a woman who really did walk around in a Princess Leia costume would probably face a lot of very real, very scary harassment — as I'm sure someone has figured out at some point or other while trying it. As we have seen from comic book conventions, lots of people apparently see cosplay as an invitation for harassment.

It's also worth pointing out that seeing a lot of the lines that really were directed at Leia in the movies put in this context does make you rethink how creepy some of them were. I mean, Lando hitting on her right away was kind of sleazy, no matter how you slice it.

But yeah, really this is just hilarious. Save her, Obi Wan Kenobi! You're her...oh, you're hitting on her, too. OK.

More like this
Meet The Disney Imagineer Bringing 'Guardians Of The Galaxy' To Epcot
By Charlie Mock
What Does “Gatekeeping” Mean On TikTok? The Viral Term, Explained.
By Courtney Young
TikToker Kate Glavan Has The Antidote To The “Hot Girl Walk”
By Alexis Morillo
Here’s What Sarah Jessica Parker’s Canned Cosmo *Actually* Tastes Like
By Emma Garza
Get Even More From Bustle — Sign Up For The Newsletter