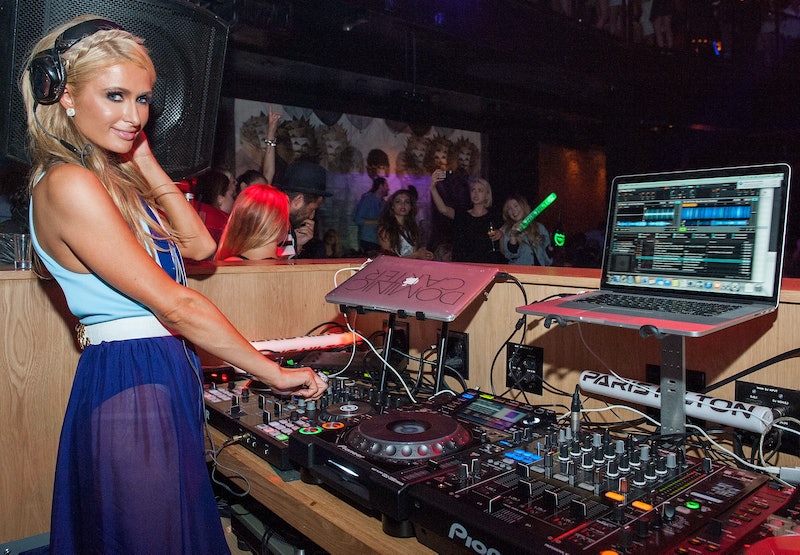 Move over, Deadmau5, reality TV veteran fledgling DJ Paris Hilton just won French radio station NRJ's "Female Newcomer of the Year Award." If you don't know what that is, it's okay, neither does DeadMau5. Basically what it signifies is that Hilton is finally settling into her big-girl job as a DJ, being recognized for that instead of the whole heiress/running joke in the Bling Ring thing. Not to say she doesn't have any other skills, and in fact, it could perhaps be argued that by virtue of simply sticking around Hilton should be winning all the awards.

I know some of you may be giggling, but think about it. It's hard out there for a Hilton when you're struggling to swim in a sea of Kardashians. There's just too many! So the fact that she's even getting out there, doing her thing, working to maintain her station in pop culture in a world wear The Simple Life is only a vague memory, is truly admirable. And whether you consider her to be a good DJ or not, there are qualities of Hilton, however small that definitely warrant formal recognition.

So rightfully I thought up four more awards that Hilton rightfully deserves. Have your acceptance speech ready, girl.

Definitely an accomplishment since I feel like it was coined during the early years of Donald Trump's "The Apprentice and she actually owns the phrase, too. I have no interest in being sued, so I won't repeat it here. You all remember it, though. Anyone who had a TV in the early 2000's remembers that phrase.

Most Good-Natured Reaction to a Horrific South Park Parody

When Matt Stone and Trey Parker sent Hilton down to South Park her portrayal was... well, a little less than flattering. I mean, by South Park standards it was more than a little harsh. Hilton took it like a champ, though, stating in an interview with Blackfilm.com “when people copy you, that’s like the most flattering thing, so whatever people can say, I just laugh about it. It doesn’t matter to me.” Mind you, this was in 2005, so she may have seen it and changed her mind since then. Still, snaps for not full-on freaking out.

Honestly, every time I try to lighten my hair it starts falling out in scalp-stinging orangey-yellow clumps. So how, HOW on Earth has Hilton maintained those white-blonde locks all these years? Voodoo magic? Extensions? I need answers, stat.

Whereas Heidi Klum strives year after year to create innovative, thoughtful, elaborate Halloween costumes, Paris is a strict traditionalist. That is, she pulls a Mean Girls and pairs animal ears with straight up lingerie. Now, some may deem that "basic," and I myself have major problems with sexy cat costumes (it's a long story, let's not go down that path) but when Hilton does it, it seems almost...poetic. Classic. Expected. Sort of comforting, if we're going to be honest.