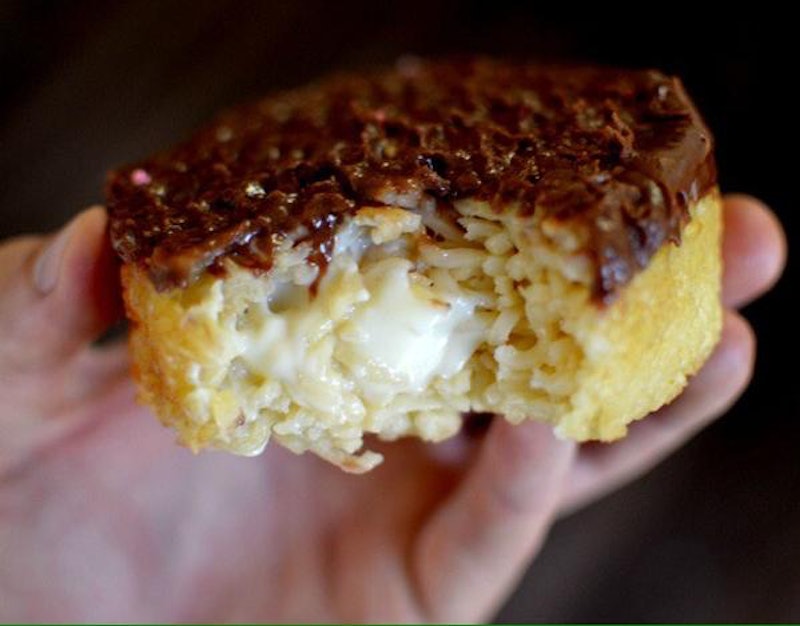 I'm scared. Not just for me, but for all of America. It used to be that donuts were sacred, that a donut was an honest dessert that meant something, and although I have warmed up to other bizarre donut creations the last few years have given us, I think that the new "Romnut" combo of ramen and donut is just about where I draw the line. Ramen and donuts have nothing to do with each other. Like, I get it—it's a forbidden love story; the dessert and meal time equivalent of Romeo and Juliet, and maybe that's why people are willing to get behind it. But like Romeo and Juliet, I can only see this ending in tears and a lot of indigestion (I'm assuming, it's been a while since I read that play).

Obviously, this is far from the first time humankind has been bold enough to think it can tame the sacred nature of the donut. New Yorkers saw firsthand the mini-apocalypse caused by the invention of the cronut a few years back, which ushered in the cronut cupcake, the bassaint (bagel croissant), and the crogel (croissant bagel). I can't speak to any of these because I am not fortunate enough to live in the kind of city that legalizes this extreme of dessert experimentation, but from their reception I can gather that they are all quite delicious.

The "Romnut," on the other hand, has yet to pass public scrutiny. Invented by Josh Scherer of Culinary Bro-Down, these "desserts" (I have to use air quotes, I've decided, out of respect for dessert) won't actually be hitting the public market. Scherer himself confesses in his blog that they might not be for everyone, but still encourages the braver among us to try his recipe and see for ourselves. It doesn't look all that hard, aside from the fact that I have no idea what horchata is. Here are two pictures of the "Romnut" so you can see the pretty version before you inevitably make a Pinterest fail-worthy version at home: