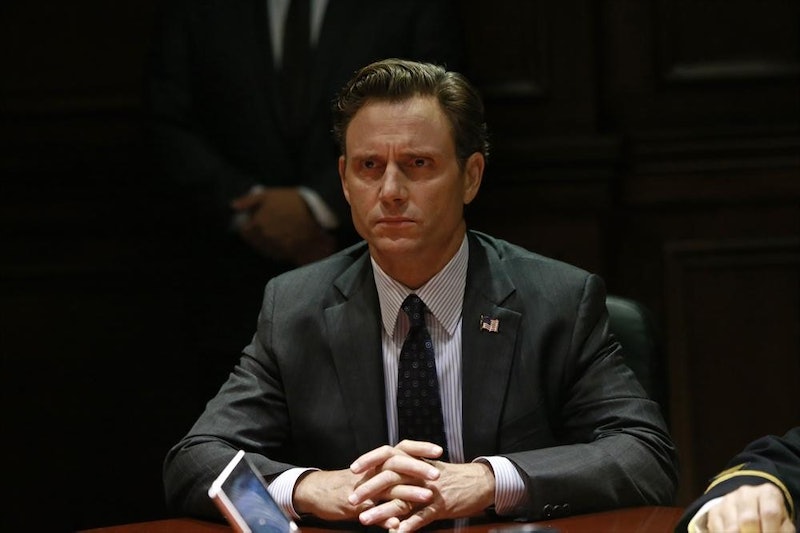 The relationships on Scandal have always been a little crazy, but this week, things got even crazier. Because this week on Scandal Mellie and Andrew are finally back together. And it's about damn time.

Mellie and Andrew have had a thing for each other for literally years, ever since Fitz was governor of California and Andrew was his number two, but the two never did anything about their feelings back then, because Mellie is a good person who doesn't step outside her marriage. But once Fitz became president of philandering — I mean the United States — and Andrew took over as his vice president, the two of them got together at last. Aaand then tragically broke up. But tonight they finally got back together.

Despite the fact that it seems like Andrew is not the great guy he seems to be, I am a fan of this relationship, for the vvery simple reason that Mellie deserves to have something just for herself. In fact, she apaprently deserves a lot better than Andrew, but Andrew is who she wants and I maintain that Mellie ought to get whatever she wants. And the fact that she's sort of getting it is a step in the right direction. As for the rest...well, it wouldn't be Scandal if there weren't drama.

Of course, the real question — besides what is up with Andrew and Elizabeth North — is how Fitz will react when he finds out. If history is any indication, the answer is "Not Well." Last time Fitz found out about their relationship, he threw what might be the world's most hypocritical man-tantrum, considering his mistress was basically standing right there while he freaked out.

But who knows, maybe he's grown up some since then?

Personally, I'm hoping that Fitz and Mellie get to a point where they can let each just do whatever without getting possessive, because every time they try to control each other's lives at all, they wind up hating one another. And how Fitz reacts will probably have a big impact on that. So let's hope he responds with some maturity this time.