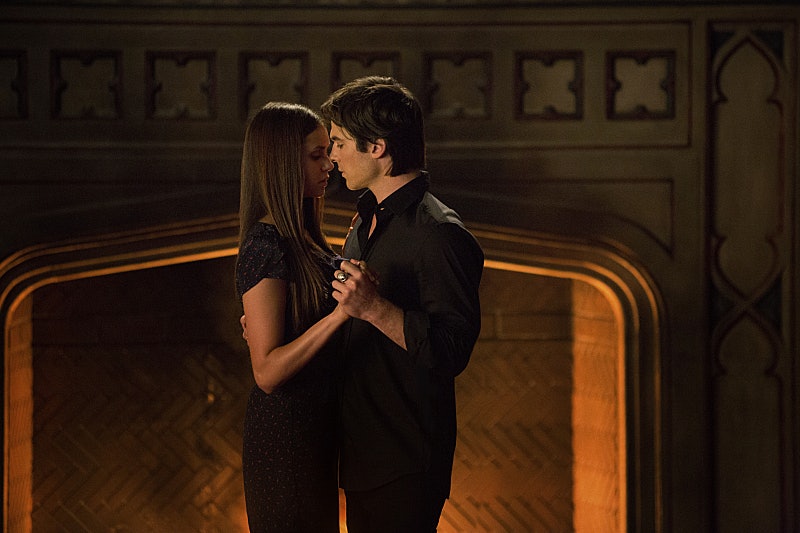 CW fans haven't felt this heartbroken since One Tree Hill went off the air. OK, that might be just me, but Thursday night's new episode of The Vampire Diaries , "Do You Remember The First Time?" was the biggest heartbreak the series has doled out in Season 6. And that's saying something, since we watched Elena erase all of her memories of Damon when she convinced herself that he'd never come back. Not only did the episode feature the ultimate failed Delena reunion, we also saw the crumbling of another potential ship. After a lengthy speech, Steroline is officially over on TVD — so, fans all over the 'shipping universe have a reason to cry themselves to sleep tonight.

I really don't think TVD has ever done this to us before, crushing two, widely supported 'ships in one night. But, here we are and I honestly don't know what feelings I'm supposed to be feeling. Thursday night's episode was an emotional roller coaster that ended with Damon telling Elena that she should live her life and move on. Which are words that I never thought I'd hear come from either of these two because DELENA IS ENDGAME. Don't you know that, Julie Plec?

Dude, how clueless could Stefan Salvatore possibly get? I feel like we can excuse some of his bad decisions with the fact that he was trapped in a safe, drowning over and over again for months in Season 5. But, I really can't excuse him asking Caroline — in a hospital, mind you, after rescuing her mom from being a prisoner — why she had "a thing" for him. Honestly, how big of a jerk and/or how blissful ignorant of life do you need to be to say that to a person? And then to apologize for not feeling the same way? God, just give it a rest, man.

Thankfully, Caroline shared my feelings and didn't think Stefan's question was sweet. Because it wasn't — it was downright insulting to Caroline, so she told him off. Big time. And it was absolutely incredible. From the minute she looked at him with such disgust at his question to the moment she walked away after she'd said her peace, Caroline owned her feelings and she owned that moment. But, it was bittersweet, because this was truly it for Steroline and they're officially over. Sigh — one down, one to go.

After much convincing, Elena decided that she wanted to try to remember the magical love she had with Damon. And it was going pretty well and Elena seemed pretty into it — so much so that she crossed the border to Mystic Falls and risked dying, just to try to reverse the compulsion. Of course, Damon wouldn't let her die, but Elena did get a taste of her memories of Damon and it was in that moment that she decided she wanted them back. And it was in that very same moment that Damon decided he should let her move on. Talk about the worst timing ever?

Back at her dorm, Elena pressed Damon for details about the last time she said I love you to him and Damon LIED. He just glossed over all of the beautiful "promise me this is forever"s and told Elena that they had a miserable time, got rained on, and drove home. He also told her that she should go on and live her life and stop trying to remember him. After all of that, after all of their feelings (and mine), and all of the drama of Elena erasing her memories and this is what Damon does? It looks like Delena might be kaput also, unless Elena really pursues getting her memories back.

So, that's it, people. Should we start 'shipping Tyler and Liv? Kai and Bonnie? Jo and Alaric? Just kidding — the only true 'ship on this series is Delena. I'd rather cross the border of Mystic Falls and burn to death than 'ship anyone else.