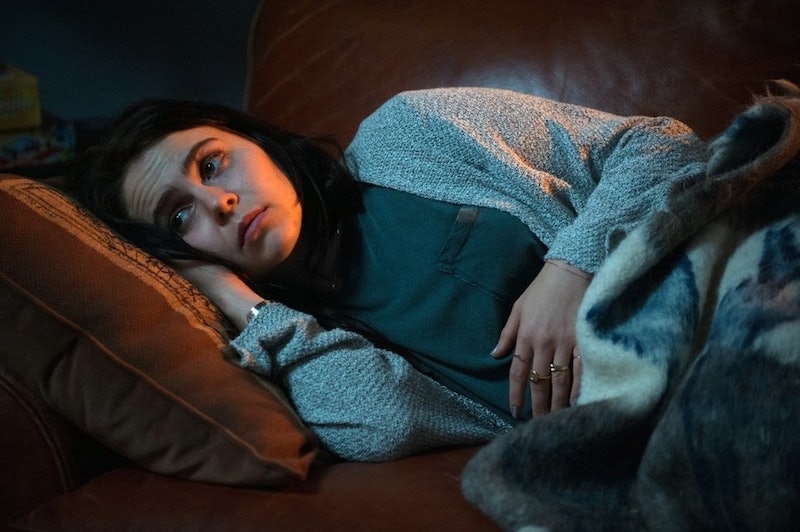 Well, that sure was a scary moment, wasn't it? During Thursday night's episode of Parenthood , titled "Aaron Brownstein Must Be Stopped," Amber experienced Braxton Hicks contractions and gave her uncle Crosby (and, OK, all the show's fans) a total panic attack. Amber started to feel sharp abdominal pains while waiting to get into a rock club with Crosby in the hopes of recruiting a new band to record at the Luncheonette. Needless to say, the Braxton Hicks put the brakes on that awfully fast. But, most importantly, Amber and her baby were just fine in the end, but that still didn't mean there wasn't plenty of drama. This is Parenthood's final season, after all.

Because just in case Amber didn't have enough stress of false labor pains and trying to help keep her family's business afloat, her brother Drew also laid on the guilt big time that he was working so hard in school so that he could help provide for her and her unborn child.

When Amber experienced her Braxton Hicks scare, she opted not to have Crosby call Drew from the hospital, because she was worried it would upset him even more. Eventually she told her brother what happened, and he urged her to call if there's ever an emergency. Amber then encouraged her brother to only go after a passion (that seemed to be her motto for her struggling family members last night) and not just make money for the sake of making money. I've said it before and I'll say it again: Amber is going to make an awesome mother. And Drew is going to make one seriously great uncle.

More like this
What’s New On Netflix: 'Stranger Things' & 'Somebody Feed Phil' Return
By Arya Roshanian
What’s New On Netflix: A Victoria Justice Rom-Com & The Return Of David Letterman
By Arya Roshanian
Everything To Know About 'The Circle' Season 5
By Gretchen Smail
Everything To Know About 'Somebody Feed Phil' Season 6
By Gretchen Smail
Get Even More From Bustle — Sign Up For The Newsletter