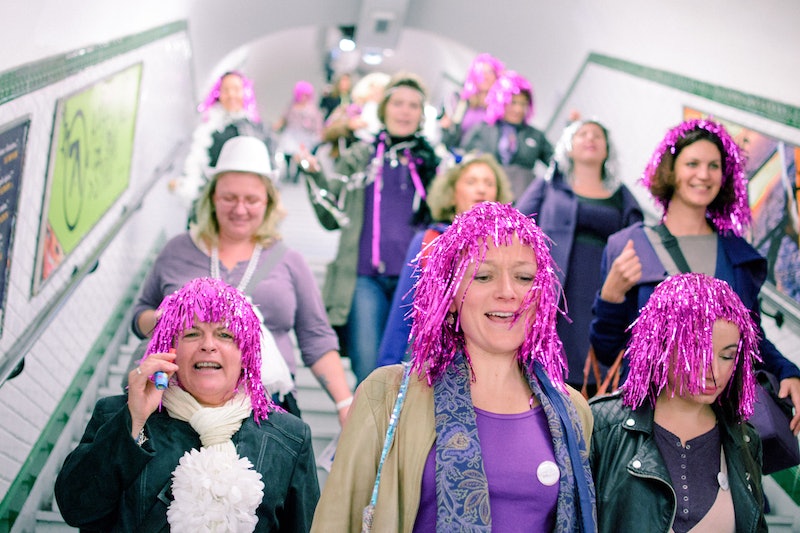 We've all heard of Take Back The Night, the 1970s feminist rally that morphed into a powerful modern-day movement against sexual assault. But now there's a new project on our radar: a French feminist campaign called Take Back The Metro. The campaign consists of a group of French women who've banded together to transform their city's public transportation system into a safe area for women. The women call themselves Osez le Féminisme, which translates to Dare Feminism, and their campaign includes covering the Paris metro with anti-harassment posters in order to reclaim this space. They've also created a Twitter hashtag so that women around the world can help #TakeBackTheMetro by spreading online awareness.

The ultimate goal of the women's group, however, is to “expose the insecurity of women in public spaces and especially on public transport” by showing passengers what constitutes inappropriate behavior. The posters include graphics warning passengers against encroaching on a woman's space or touching a woman inappropriately. They even instruct men not to spread their legs across multiple seats while sitting down (a habit that's more annoying than invasive, but, all the same, extremely unwelcome). For the most part, the graphics on the posters are simple, straightforward, and effective:

Others are more humorous, like the following poster, which tells men they'll be slapped if they decide to put their hand on a woman's bum:

All humor aside, the campaign was launched in the wake of some pretty unsettling statistics regarding the Paris metro system. According to the Take Back The Metro site, a July 2014 study found that 94 percent of Parisian women surveyed reported having experienced sexist behavior on the metro. This led to nearly three-quarters of women changing their behavior or clothing when using the transportation system. (Surprisingly, Paris is reported to have the sixth safest subway system among other world cities, so one can imagine these statistics being even more troubling in other nations.)

Still, starting this campaign in a subway with such a pervasive climate of sexual harassment offers a powerful example for other cities with similar issues to overcome. Already New York City has plans to make their subway cars safer spaces for their passengers, but even the safest subway system in the world has a long way to go.

Unfortunately, so does Paris. While the Take Back The Metro campaign is a promising start, the fact remains that these posters aren't a permanent part of the Paris subway system. They're also incapable of eliminating a climate of street harassment and catcalling in and of themselves. It will take more than a poster to dissuade someone from harassing a woman on a subway, but this is something that the campaign recognizes, and why they're attaching themselves to an even larger cause.

As part of their initiative, the Take Back The Metro site encourages supporters to sign a petition based on a plan from The Traumatic Memory and Victimology Association to prevent and combat sexual violence. The site notes that the current Paris transportation system remains relatively silent about this issue, and the petition is designed to issue a call to action. It not only asks for the protection of sexual harassment victims, but demands "quality support" as well. Although it's written in French, you might consider signing here.

Whether or not the city responds to their demands, however, the actions of the Take Back The Metro campaign offer a necessary wake up call to passengers and transportation officials alike. One can only hope that the next time a brainless subway-goer considers touching the woman next to him, he will see one of the campaign posters and think twice about the consequences. In the future, however, we're still in need of more concrete solutions, such as those proposed in a recent report by Stop Street Harassment. All the same, this report does note that the first step to eliminating street harassment is to talk about the issue, and the Take Back The Metro campaign seems like the perfect way to get this conversation started.