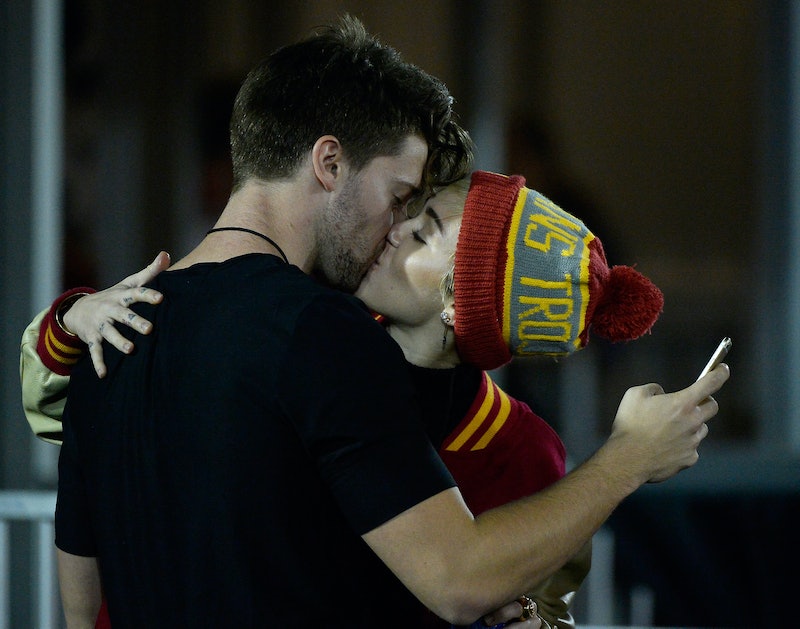 "It's our party we can love who we want. We can kiss who we want" is more than a set of lines in Miley Cyrus's song "We Can't Stop." This is the way Miley Cyrus is living her life these days, and it looks like Patrick Schwarzenegger is down with this plan. Cyrus and Schwarzenegger were spotted making out at the USC football game Thursday night — while he snapped a selfie, of course. It's been a minute since Cyrus has been linked to a guy, and I have a feeling that this one could stick. The pairing seemed a little random when it was first reported, but I gave it some time to settle in my mind and now I totally see it. There is a lot going on here that makes me think their relationship could get serious beyond the public make out session.

Cyrus and Schwarzenegger, both 21, have been taking some steps in the right direction. As of now, it seems they are just hanging out — well, and kissing in public — but you know how that game goes. Perhaps they're doing the whole all-the-benefits-of-being-a-couple-but-without-the-"burden"-of-having-a-title thing. Ugh. Don't even get me started on that. You know we have all been there at some point. Anyway, I think that Cyrus and Schwarzenegger have what it takes to take this into a legitimate, full-on relationship. Here's why:

He Had A Crush On Her

Schwarzenegger has had a crush on Cyrus for a long time. Reportedly, they went on a few dates in 2011 when Cyrus was on break with former fiancé Liam Hemsworth, but nothing really came out of it. Schwarzenegger was candid in a 2011 interview with Details about his romantic interests, saying "My eye, though, is set on Miley." Aaaww. How precious. That was three years ago, so this is clearly not a fickle dude. Plus he is obviously patient by letting her work through the whole broken engagement situation and come into her own as a single person first. Very healthy and respectful move.

They Were Friends First

"They've been friends forever," a source told E!. The source even added that Schwarzenegger "loves what an amazing heart she has and that she really pushed him out of his comfort zone." Being friends with someone does not have that same pressure that comes with having an immediate romance. You are able to get to know each other well without anything feeling too forced. So with these two, the care they have for each other could be a great foundation for a romantic relationship.

She Met His Family

Reportedly, Cyrus has met Schwarzenegger's famous mother Maria Shriver. Apparently Cyrus was very nervous about the meeting. Aaaww, it's cute to see that a pop star can still get meet-the-parents axiety. Sources have reported that it went really well though. Cyrus has also met one of his sisters. Meeting the family is a pretty serious step, especially if these two are not officially dating yet. Glad to know they approve of my girl.

He Introduced Her to His Friends

When they were not making out, Cyrus and Schwarzenegger allegedly hung out with his USC friends at the game. A squad of bros can be very intimidating. Sometimes introducing a significant other to your friends can be more crucial than a formal dinner with your parents. These are the people you choose to surround yourself with and as a 21-year-old college student, Schwarzenegger must spend a great deal of time with his friends. Their approval is important.

She Has Entered His World

I imagine that it is very difficult to date Miley Cyrus because no matter what, you can be considered a sidekick. She has an insane schedule with touring and appearances, and most guys would have no choice but to be along for the ride. However, with meeting his family and hanging out at his school, Cyrus has proved that she can keep it real and does not think she is above him in any way. They are both the same age, living in the same city. It doesn't matter if she's a famous pop star, when it comes down to it, they have more in common than meets the eye.

It is obvious that there is chemistry between the two of them. I mean, just look at the pictures. I am not one for excessive PDA, but if you are having a genuine moment and want to kiss or hug the person you are with, follow your feelings. They are adorable and should just do what makes them happy.

They Both Have Famous Parents

21-year-olds have this weird relationship with their parents. They are adults legally, but there is still a certain reliance on parental support. This is has to be even more interesting when you have famous parents and everyone knows who you are. Cyrus is, of course, the daughter of singer Billy Ray Cyrus and Tish Cyrus. Patrick Schwarzenegger's parents are Maria Shriver and Arnold Schwarzenegger. They both can complain about their parents in addition to benefiting from the perks of having famous parental units.

Cuffing season is very real. With fall winding down and winter cold coming, everyone wants to have someone to cuddle up to these days. I can definitely see Cyrus and Schwarzenegger taking the plunge to make this relationship official, and I'm excited to see where this one goes.