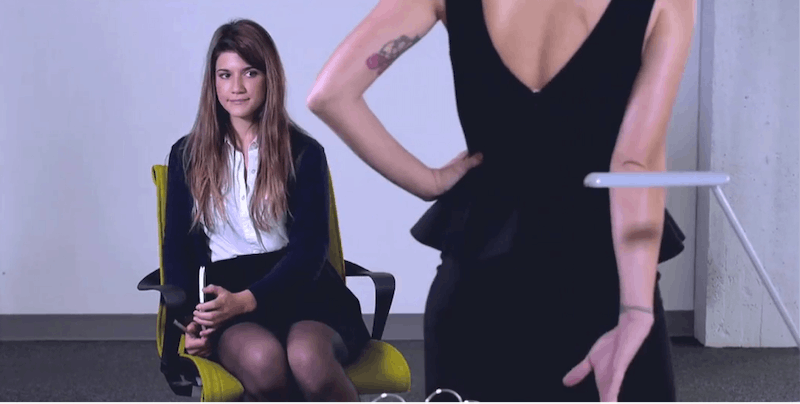 Like many unsuspecting Americans, last night I was minding my own business watching Fitz and Jake duke it out over Olivia on Scandal when the Fifty Shades of Grey trailer premiere happened to me. I haven't actually read the book, so I don't have many opinions formed about the casting or the upcoming movie, but I do know that the "Fifty Shades of Gay" parody trailer by The Gay Women Channel looks a hundred times more fun than the original one could ever hope to be. For real, who do I have to call in Hollywood to make this happen?

While the Fifty Shades of Grey trailer littered its precious few seconds of air time with scenes we didn't necessarily need to see, this parody video does not miss a single beat. "My tastes are very...singular," says the strong, confident woman who has replaced Christian Grey. "A straight girl wouldn't understand." They perfectly capture the sexual tension and anticipation of the first few seconds of the original trailer, but then go on and delve into something that the original Fifty Shades will forever lack: REALISM. All the scenes play on the sexual fetishisms both from the movie and from the "male fantasy," hilariously reclaiming them and representing an actual lesbian relationship (spoiler: it involves Netflix).

This is far from the first gem brought to us by The Gay Women Channel, who also bestowed on the internet the comedic video "Gay Women Will Marry Your Boyfriends" and "First Gay Hug," the heartwarming depiction of homophobic people hugging a gay person for the first time. I hope that they know that they are officially responsible for disappointing an entire nation—nay, an entire world—when Fifty Shades Of Grey comes out next Valentine's Day and inevitably does not measure up to their awesome parody version. Here's the video. Make sure you're in good company when you watch it so you don't ugly laugh in public like I just did: