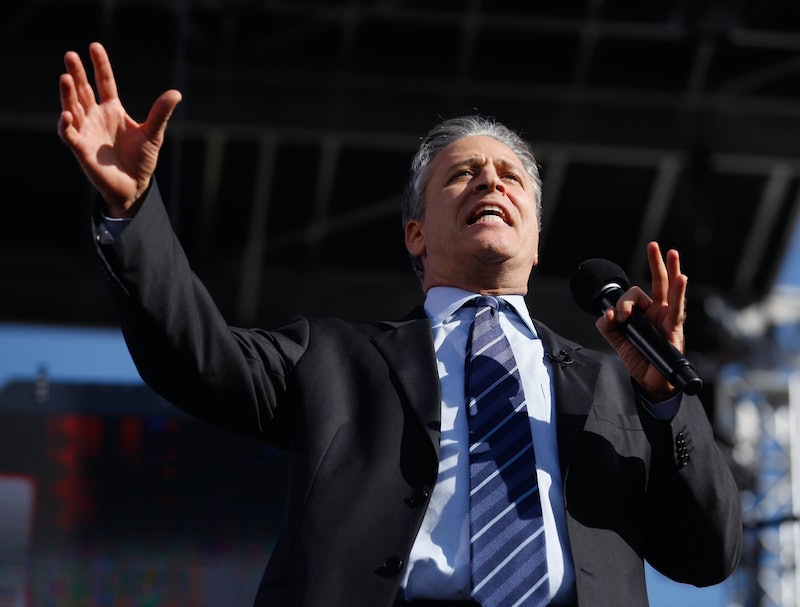 Jon Stewart’s Rosewater is… well, fine. It’s a remarkably earnest effort, one fostered by Stewart’s own connection to the real life story of journalist Maziar Bahari’s imprisonment by the Iranian government. It’s hardly messy, though occasionally disjointed — a quality that is almost inevitable in a directorial debut. But peering through the solid B that is the Daily Show host’s first go at feature filmmaking is the gift that warmed him to us in the first place: the gift for comedy.

As you might have inferred from the premise, Rosewater is a predominantly serious affair. Bahari (Gael Garcia Bernal) suffers physical and psychological torture at the hands of the titular government agent, clings to memories of his long deceased father and sister, and treads upon a political tyranny whose atrocities are hardly confined by the runtime of the movie. Like I said, not exactly a joyride. But at points throughout, Stewart shows his love for humor and aptitude for comic timing.

Even when the events turn dire, Stewart maintains a steady comic touch. Bahari colludes tacitly with the viewer as Rosewater’s accusations grow more and more absurd. The institution’s befuddlement over its prisoner’s newfound hope (following a surprise phone conversation with his pregnant wife) is a terrific sight gag. And perhaps the biggest laugh in the film comes from Bernal’s speedy authorization of a contract that would grant his character liberation from the administration’s clutches — a packet they suggest he read carefully before… oh, he’s already signed it.

Instances like these, some of the bright spots in Stewart’s too often foggy illustration of an important story, probably shouldn’t be the ones we walk away remembering. But that’s just the thing: they are. Not because Bahari’s tale isn’t worth our attention, or because the themes of governmental tyranny aren’t within the grasp of those watching, but because these brief bits of comedy are the pieces that Stewart delivers best.

And this shouldn’t be much of a surprise. Although deemed a premiere source of news and current events for the American public, Stewart has many times asserted himself as “a comedian first” — most notably when laying waste to Fox News anchor Chris Wallace back in 2011 — and has attempted extracurricular success in stand-up (at which he is terrific) and acting (at which he is… this). His most notable contribution to the zeitgeist, The Daily Show, could not have achieved its monumental levels of critical, commercial, and decorative success were not for Stewart’s deft understanding not only of politics but of comedy itself.

As such, that’s exactly where Stewart’s cinematic ambitions should turn next. With such a nimble understanding of what lands a good joke, as exemplified on The Daily Show and in the unlikely home of Rosewater, Stewart could no doubt craft a masterful comedy movie. The mind jumps immediately to political satire, though Stewart shows off a comfort with small, intimate comic beats that would readily found any sort of humorous project.

Granted, the downside of Stewart’s continued exploits in filmmaking would be another extended absence from The Daily Show. Silver lining: the result of his last hiatus was John Oliver’s own HBO show Last Week Tonight, which some would argue even outweighs The Daily Show in its castigation of America’s sociopolitical hypocrisies.

Ultimately, Stewart won’t be hosting The Daily Show forever. Once he opts to leave behind that fluorescent blue set for new pastures, we should welcome with open arms a career in comedy filmmaking. Be his interests in vast satire, broad farce, intimate human comedies, or some combination thereof, everything he’s shown us so far offers no uncertain clue about the most important aspect in such a mission: he can make us laugh.

More like this
Sadly, 'Fantastic Beasts: The Secrets Of Dumbledore' Isn’t Streaming — Yet
By Arya Roshanian
Everything To Know About Marvel’s 'Thor: Love And Thunder'
By Grace Wehniainen
Laura Dern Said “Cultural Awareness” Made Her Rethink This 'Jurassic Park' Fact
By Grace Wehniainen
Colin Firth Revealed His Favourite Mr. Darcy (& No, It's Not Himself)
By Sophie McEvoy
Get Even More From Bustle — Sign Up For The Newsletter