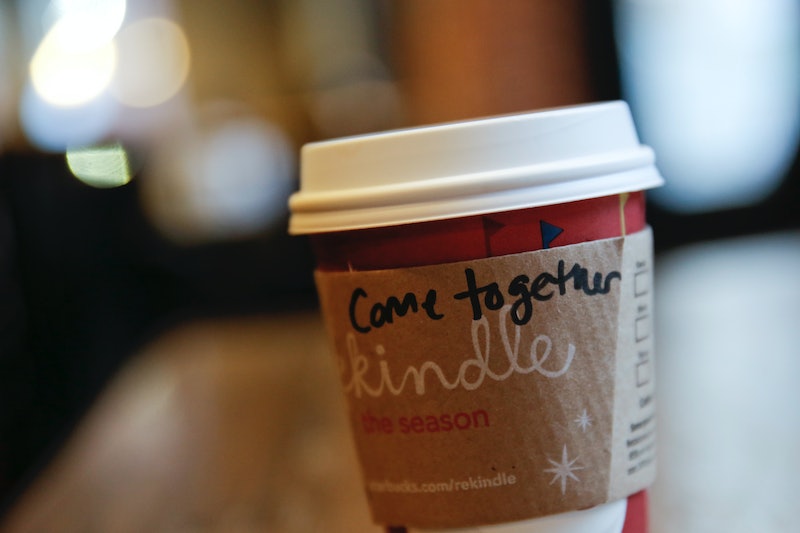 We hear about Starbucks testing out new beverages all the time — cold brew, the Dark Barrel Latte, and so on — but how often do you hear about Starbucks drinks being retired? Not terribly often. Remember how the Eggnog and Gingerbread Lattes almost vanished without anyone knowing this year? Terrifying (insofar as it’s possible for the disappearance of an indulgent and unnecessary espresso drink to be terrifying).

The truth of the matter is that for every Pumpkin Spice Latte, there are dozens of drinks that either don’t make it past the testing phase, or which ultimately fail even if they do hit the market proper. Sometimes it’s for an a good reason (e.g., the drink was gross); sometimes it comes down to money; and sometimes it comes down to how much of a pain the arse they are to make. So, on this chilly Friday, let us raise our mugs in tribute to a few of those drinks which have gone to the Great Starbucks in the Sky. Fare you well, ‘Bux bygones. You will be missed.

Chantico was a type of hot chocolate — but not just any type of hot chocolate. It was pretty much liquefied chocolate, and according to Business Insider, it contained a mind-blowing 390 calories and 20 grams of fat per six-ounce cup (which, by the way, was the only size it came in). It hit Starbucks locations everywhere in 2005, but 11 months later, it vanished from the menu for good. I suspect it was either too rich for most peoples’ tastes, although I suppose it’s possible (and also a little horrifying) that others thought the six-once size just wasn’t big enough.

Well, the good news is that you can still get a Maple Macchiato if you’re in Canada; the bad news is that it was phased out of the U.S. market back in 2012, according to GrubStreet. But there might be more good news, too: As of October 10, the ‘Bux was testing out a “Golden Maple Latte” in Orlando, FL and Cleveland, OH. Although mixing maple syrup in your coffee might sound a little weird, I actually had quite a lot of success recently when I made myself one of Gimme Some Oven’s Maple Lattes, so don’t knock it til you try it.

When Starbucks began testing out the Chestnut Praline Latte last holiday season, another drink had a trial run right alongside it: The Cherries Jubilee Mocha. Alas, though, although it was available in Orlando and Tampa for a limited time, it didn’t make the cut. Most cherry syrups taste like of like cough syrup (or at least, they do to me), so I wonder if that was the problem? We may never know.

Remember when Starbucks teamed up with Pepsi to make a coffee-flavored soda? Me neither, but apparently it happened in 1994. According to Starbucks CEO Howard Schultz (via The Daily Meal), some people loved it and some people hated it; eventually, they replaced with the bottled Frappuccino instead. For the record, I’ve had other coffee sodas, and I actually find them strangely delicious… but I can see how it might be a wee bit polarizing. Carbonated coffee isn't for everyone.

I thought about titling this entry after the Orange Mocha Frappuccino, but really, it’s about the orange-flavored syrup itself. Stay on Fountain used to add it to Black Tea Lemonade; Starbucks Melody made orange Italian sodas with it; The Daily Meal recalls the aforementioned Orange Mocha Frappuccino; and so on and so forth. Everyone had their own uses for it, with its adaptability being its main virtue. I’m not sure exactly when Valencia syrup went the way of all things, but at least you can get Valencia Refreshers at most ‘Bux locations these days.

Starbucks has a tendency to retire its drinks with little to no fanfare, so I’m not totally certain when the Honey Latte disappeared — or even when it hit the menu in the first place. According to a post on Chow Hound, they were definitely around in 2008; if The Bitching Barista’s opinion of it was the prevailing one, though, it’s easy to see why it didn’t last. “The most disgusting thing I’ve ever tasted in my life” isn’t exactly encouraging.

I think this one met the same fate as the Cherries Jubilee Mocha: It started out as a test, but ultimately didn’t make it to the market. Starbucks Melody noted when it was tested out in North Carolina (fall of 2011) and when it went international and appeared in Poland (fall of 2012)… but after that, it quietly disappears from record. Ah well—at least there’s still the Apple Pie Frappuccino from the Starbucks secret menu.

I’ll be honest: I have no idea what “Sorbetto” was. Somehow I never encountered it when it was available in 2008, but from what I’ve been able to dig up on the Interwebs, it was kind of a sweet, fruity, smoothie-like thing. Reuters (via Business Insider) reported that “it failed to wow consumers and cleaning the machine that dispensed Sorbetto was a bane to baristas, who complained that it added about 45 minutes to closing duties.” Ouch. Looks like the Vivanno smoothies have been much more successful.

Tazo Tea Infusions were a dairy-free chai latte alternative; instead of milk, they involved steaming Tazo black chai with fruit juice. They came in two flavors, Berry Chai Infusion and Apple Chai Infusion, although something about them just didn’t do it for your average Starbucks customer. They appeared only briefly in 2009 before being relegated to the Starbucks graveyard.