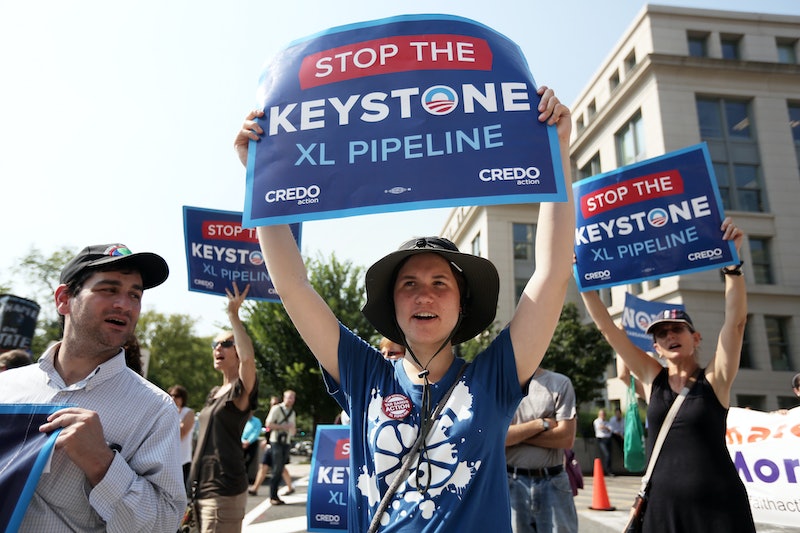 On Friday, the Republican-led House of Representatives approved construction on the Keystone XL Pipeline, voting 252-161 to pass the legislation. It marks the ninth time that the House has voted on the 1,660-mile pipeline that will stretch from Canada to Texas, carrying crude oil from our northern neighbor's tar sands to our southern refineries.

The bill has been said to be "political maneuvers" by politicians from both parties in the battle for the Louisiana Senate seat. Since neither candidate won more than 50 percent of the votes at the midterm elections, the fate of the incumbent, the Democratic Senator Mary L. Landrieu, will be decided in a showdown on Dec. 6 against her Republican challenger, Representative Bill Cassidy.

Sen. Landrieu is busy gathering votes in the Senate to pass the bill when voting holds on Tuesday, Dec. 18 — she appeared to have collected 59 so far, one vote shy of passage. She told the New York Times on Friday she was "confident" that she would be able to get all 60.

Rep. Cassidy, on the other hand, tried to claim credit for the bill's Senate chances, telling the Times:

The bill considered today that I introduced is the language asked for by the Senate. So we are going to make it as easy as possible for the Senate to finally get a bill to the president’s desk that approves this long-overdue Keystone XL pipeline.

Since the pipelines crosses international borders, the Obama administration will have a say in it, too. But what are the bill's prospects, really, now that it's passed the House of Representatives? Here are four scenarios that are likely to happen:

The Democrats still control the Senate until January 2015. Landrieu's fellow Democratic Senators are holding the vote partly to boost their colleague's chances of winning her race, but she is widely expected to lose. They're also holding it because they're certain Senate Republicans will make it one of their priorities come January. But even if Landrieu doesn't get her votes to pass the bill, which is possible, then the GOP-led Senate will when they begin their tenures.

One of the cool executive powers that the President has is the ability to veto bills that arrive at his beautiful oak wood (I am guessing) bill-signing table. The White House indicated Thursday that Obama will veto the bill if it passes the Senate. Its Press Secretary, Josh Earnest, said:

The bummer thing about the POTUS veto power is that the Senate, if it musters up 67 votes, can override it — actually, that system is put in place to keep the executive branch (Obama & co.) in check, so in theory it works, but not when a party and its supporters are out to do everything in its power to go against you. The Senate most likely won't be able to get enough votes to override it until — again — the Republicans take over in January.

The Keystone XL Pipeline has a solid chance of surviving the cacophony of political back-and-forths, to the dismay of many environmentalist activists. But its planned route passes through Nebraska, and there is an ongoing a legal dispute over whether the governor or a state agency has the authority to approve it.

The Nebraska Supreme Court has heard the case and will make a decision. According to Rebecca Leber at The New Republic, if the route ends up being rejected, then TransCanada, the company behind the pipeline construction, will have to go back to the drawing board. And the more drawn out the delay to develop a new path for the pipeline, the "less financially viable it becomes," wrote Leber.

In which case, the pipe(line) dream will probably be dead.