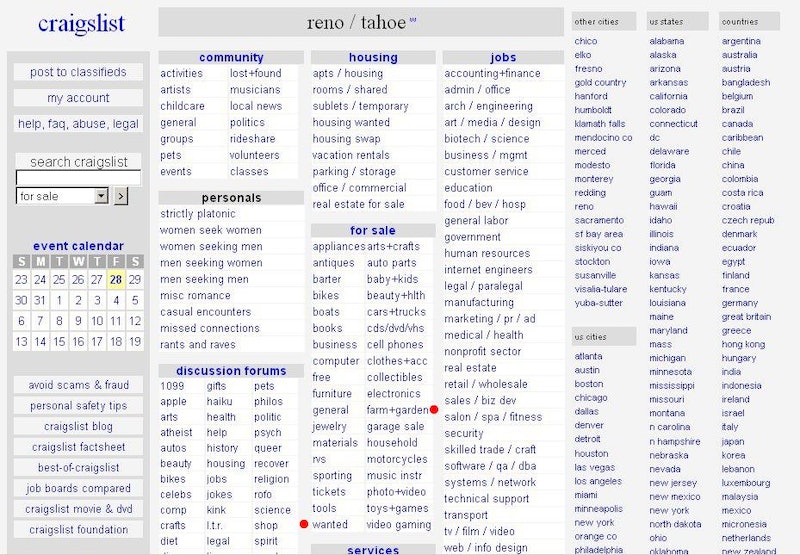 It’s a jungle out there in Internetland — and nowhere is that more true than Craigslist. When you first discover Craigslist, it looks like a minor miracle: I can buy things for cheap! This job looks like one I could actually do! This apartment is one I can actually afford! That’s amazing!... But all too soon, you learn that Craigslist is far from the miracle you first believed it to be. It’s a scary, lawless place, not unlike the Old West, and you’d better wise up or get out.

OK, yes: Craigslist isn’t the devil, per se, and you can score some pretty amazing things off of it, from places to live to loving and affectionate significant others. But let’s face it: For every awesome experience you have buying something off of Craigslist, job hunting via Craigslist, or finding an apartment on Craigslist, there are approximately eighty bajillion horrible experiences you or someone else has had on it that will make you want to run away from it in terror. It’s a mixed bag, so you’ve got to tread carefully — and learn the lessons it teaches you quickly and well.

Here’s a small selection of the things we’ve learned thanks to Craig Newmark and his nationwide List:

Reading apartment listings on Craigslist is like decoding a secret language. Or like Opposite Day. Whichever you prefer (although I would argue that they’re both terrible).

2. If Something Looks Too Good to Be True, It Probably Is (Especially If It’s Concert Tickets)

If the tickets are either cheaper than they would be otherwise, or much-sought-after and therefore astronomically expensive, they’re probably fake.

3. If Something Looks As Good As You Might Expect It to Look, It’s Probably Still Too Good to Be True

Again, especially if it’s tickets to a concert or other event. Even if they’re being “sold” at face value, odds are they’re not the real deal. Fraud Guides has some tips on how to avoid getting ripped off… but the only method that’s guaranteed to work is not buying tickets on Craigslist in the first place.

OK, yes, I know Backwoods Home Magazine is responsible for the original “safety not guaranteed” ad — but given the frequency with which similar ads pop up Craigslist, it has to mean something, right? (Kidding. I swear.)

5. That “Marketing” Job Listing That Sounds Right Up Your Alley Is Totally a Scam

Any Craigslist job listing involving “marketing” or “sales” really means you’ll be going door-to-door and shilling useless junk no one wants or needs. Sometimes it’s just questionable, as was the case for BuzzFeed’s Hillary Reinsberg; other times, however, it’s a multi-level marketing scheme. In the case of MLM schemes, you’ll probably figure out the deal when you arrive for your “group interview” (which will just be a sales pitch geared towards sucking you in) — but if you don’t, hopefully your second “interview,” which will be a long day of unpaid work, will tip you off.

6. That “Telecommuting” Job? Also a Scam

Obviously telecommuting jobs are not by nature scams; I’ve spent the past several years working from home myself, all with reputable and awesome employers. But that “part-time, work-from-home data entry” job listing on Craigslist? It’s probably a scam — or, as Christopher Spata wrote at Salon in 2012, a flat-out robbery.

7. The Line Between a Hoax and Reality Is Remarkably Thin

Remember that Craigslist personals ad from September from two women looking for the perfect "fall boyfriends?" I still haven’t figured out whether it’s the most basic thing ever, or whether it’s the most masterful piece of trolling to have happened in the history of the universe. Same goes for the restaurant that allegedly proved that smartphones are why restaurant service is so damn slow these days.

8. Missed Connections Can Be a Place of Unexpected Beauty

Read this story. And this one. And these ones, too. Craigslist isn’t always a nightmare waiting to happen.

9. And It’s an Excellent Place to Champion the End of Street Harassment

In September of 2013, a 27-year-old woman from Minneapolis used Missed Connections not only to take someone who harassed her to task, but moreover, to spell out exactly why street harassment as a whole needs to stop. The post is old enough that it’s not up anymore, but thanks to all the media coverage it earned at the time, you can still read it in all its glory. Please do, and send everyone you know to it while you’re at it. It’s definitely worth it.

10. But Also, People Are the Worst

Dear anyone who has ever posted anyone else’s contact information as part of a fake Missed Connections ad (or any other Craigslist ad, for that matter): You are the worst. Seriously. Do not do that to anyone, no matter how angry you are at them/funny you think it will be/whatever. You have a special place reserved for you in whatever netherworld you believe in, and it will not be a fun time for you.

Or at least, it’s full of haunted things, like Dictaphones and garden gnomes. But you wouldn’t be silly enough to bring one of those home with you, right? We’ve been over that already. Bad idea.

12. “I’ll Pick Up That Couch I’m Buying from You Today at 4 p.m.” Actually Means “I’m Dropping Off the Face of the Earth and You’ll Never Hear from Me Again”

To be fair, some people have really awesome experiences buying and selling furniture on Craigslist; The Frisky’s Winona Dimeo-Ediger, for example, used it to sell all of her stuff when she moved to Nashville in 2013 and definitely came out on top. But let's face it: Just when you think you've found the perfect (read: reliable) buyer for whatever you're selling... they're gone. Or, just when you've found a couch from the perfect (read: not creepy or disturbing) buyer... they're also gone. You will never hear from these people again. Did they get abducted by aliens? We may ever know.

Not that people are used cars, but still. You don’t want to drop a bundle on a used car, only to have it die on you five miles away with no way to retrieve your investment. The same goes for roommates: You don’t want to commit to living with someone, only to find out that they’re the worst roommate ever to have walked the Earth.

14. Sometimes the Best Things In Life Really ARE Free

But hey, it’s not all bad. Want a free giant cardboard dinosaur? Someone in Vermont has one, and they’re just giving it away. If I lived in Vermont, I would be all over that.

More like this
The 6 Best Closet Dehumidifiers On Amazon
By Sharon Brandwein
Is The Stanley Adventure Quencher Worth The Hype?
By Alexis Morillo
6 Storage Hacks To Eliminate Clutter, According To Experts
By Allie Volpe
These 15 Things Will Make Your Tiny Space Feel So Much Bigger
By Emma Garza
Get Even More From Bustle — Sign Up For The Newsletter