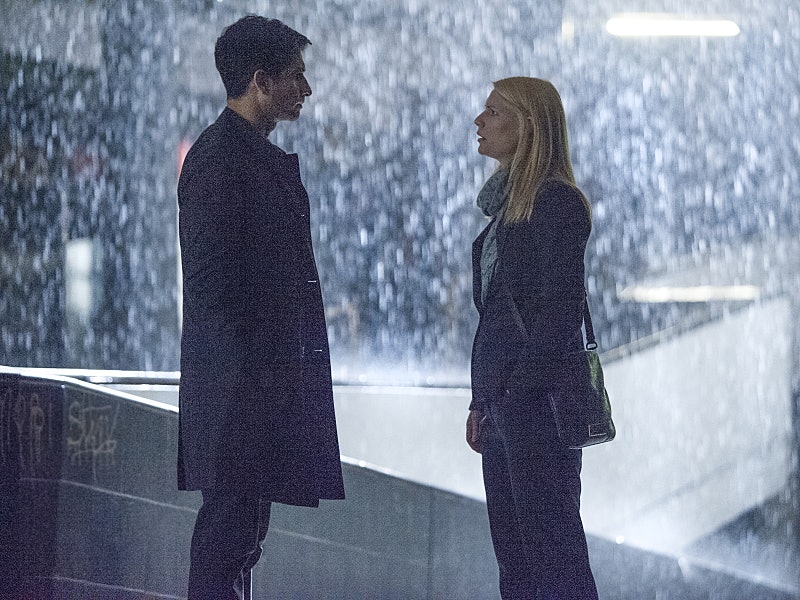 Last week, I was majorly creeped out by that shocking scene between Carrie and Aasar Khan on Homeland — the reveal was so abrupt, and the cliffhanger-iness of it all painted him in quite a villainous light; especially considering the fact that most of us assumed that he was simpatico with Tasleem Qureshi's operation with Dennis Boyd. But with the new information we got in Sunday's episode of Homeland? It would seem that we're definitely living in some very gray territory.

Let's get this straight: He allegedly got Carrie out of police custody because he didn't want another CIA station chief debacle on his hands. So basically, he was in on the whole Sandy Bachman debacle, but he didn't know about Tasleem's plan to get Carrie on a plane back to the states. I mean, there's some wiggle room there on whether he was telling the truth or not (this is a spy drama, after all) but I think that the very sincere-seeming "I believe you"-ridden scene in the rain — plus the fact that he revealed Boyd as the mole — makes me think we should take him at his word.

Which leads to the big question — namely, why? Does he oppose Tasleem's plan to undermine the CIA? It didn't quite seem that way (and besides, doesn't he outrank her?). I'm guessing that after that very film noir, rain-soaked, Romeo and Juliet-esque tableau that his feelings are of a more... uh, personal manner. Which is, you know, fine. I guess.

But if that really is the direction they're going, it's a little frustrating: We all know that Carrie Mathison/Claire Danes is utterly magnetic and has chemistry with everyone (fun fact: At a press screening I went to a couple of months ago, Danes and showrunner Alex Gansa joked about just that), but still... what with Quinn and Aayan — and that's not even mentioning the fact that the whole Brody relationship kind of tanked part a large portion of seasons 2 and 3 — isn't it a card that's starting to feel a little overplayed?