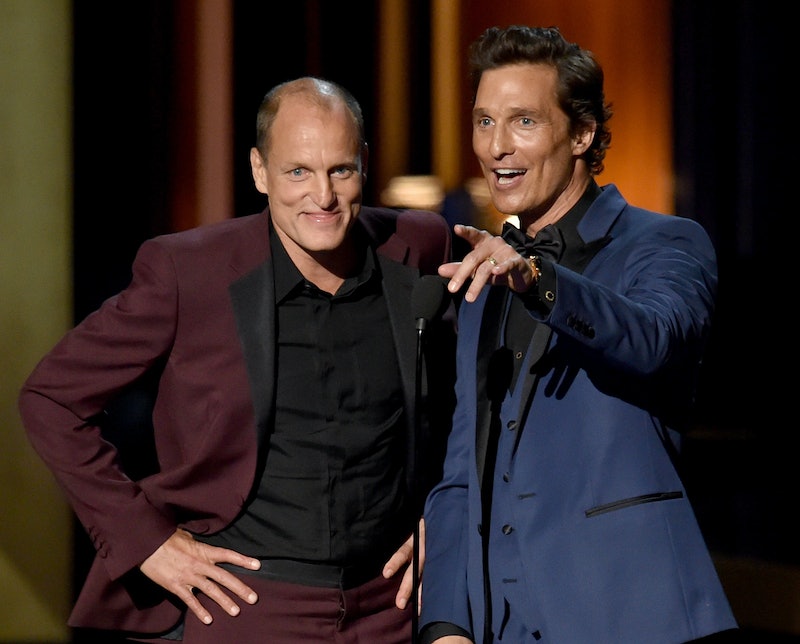 Yes, we knew there was going to be some type of Hunger Games: Mockingjay reference on Saturday Night Live with Woody Harrelson as host. How could there not be? Did I think it was going to involve the entire cast? No. No, that was a pleasant surprise. But another parody that was begging to be done was Harrelson’s (and Matthew McConaughey’s) True Detective. And while the real Matthew McConaughey didn’t make a guest cameo on the show, the next best person did — Taran Killam.

I’m going to make the bold statement and say that Taran Killam’s impression of Matthew McConaughey is almost better than Matthew McConaughey himself. McConaughey has become this beacon of poetic nonsense, and that is what Killam does best in his impression. The two were brought out on Weekend Update, when Colin Jost invited the Season 1 True Detective costars to talk about the upcoming season with Vince Vaughn and Colin Farrell. First off, Killam’s McConaughey refers to Colin Jost as Co Jo, which will forever be the way I refer to Co Jo. Killam was so on point on Saturday as McConaughey, he even had Harrelson laughing at his crazy tangents.

Whether Killam was talking about how he and Harrelson are “creatures of the night,” — whatever that means — or saying that it takes three licks to get to the center of a Tootsie Pop (how does he know? The owl told him...), the writing was spectacular, and the acting was even better.

If we can’t get the real McConaughey on SNL, Killam is certainly the next best thing, if not better than the real thing. Only down side: there wasn’t a Lincoln car commercial reference.

Video will be posted when available.