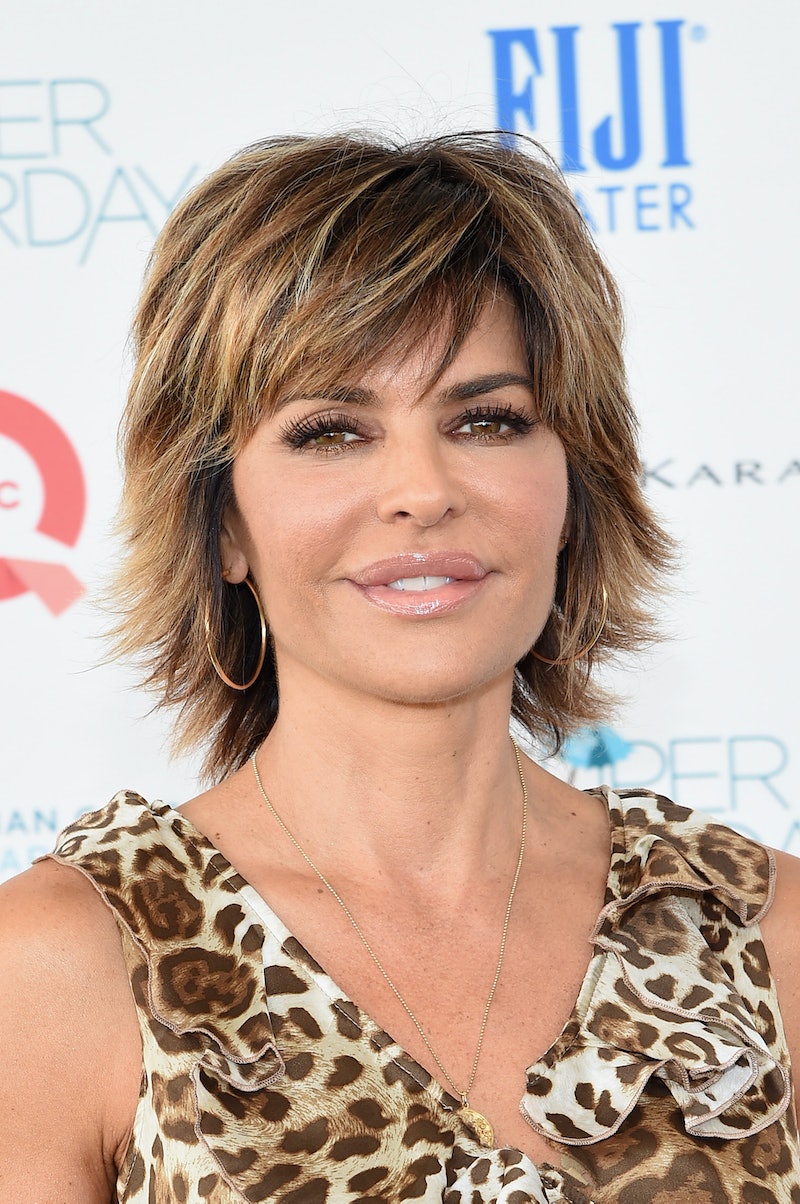 On Tuesday, Bravo is bringing back The Real Housewives of Beverly Hills for Season 5, and, by the looks of the RHOBH promo, they're also bringing back some more drama (duh), fights (of course), craziness (yep), and former soap opera stars (well, this is new). In addition to returning housewives Lisa Vanderpump, Yolanda Foster, Brandi Glanville, and sisters Kyle and Kim Richards, Eileen Davidson and Lisa Rinna will be joining the reality series that sucks people in and is even better when binge-watching while sipping on champagne, housewives style.

Like Davidson, Rinna is definitely not new to the TV scene, being in front of the camera, and getting into fights — mostly fictional. As a well-known actress, she's starred in daytime hits, reality competitions, and is recognized for her marriage to fellow actor Harry Hamlin. Rinna might be in for a rude-awakening now that she is an official housewife. She might not be used to dealing with all the drama this show brings in real life, but I think it's safe to say she'll be somewhat ready, seeing as she's dealt with chaos on other reality shows and the ridiculous drama that comes with soap operas.

So, who is Rinna and where have we seen her before? I think the better question is where haven't we seen her?

She Was a Top Daytime Star

For almost 300 episodes, Rinna starred as Billie Reed on Days of Our Lives. She was a character you either loved (me!) or hated, since Billie was known for getting in between Bo and Hope (a.k.a one of the fan-favorite couples). Too bad she didn't get to star alongside Joey Tribbiani.

Similar to her days on DOOL, Rinna joined the fifth season of the nighttime sudsy drama Melrose Place as Taylor McBride. Not only did she portray an opportunistic female, but she played wife to Rob Estes' character, Kyle. I have a feeling those former cunning days will come in handy on RHOBH.

Marshmallows, Rinna Was on Veronica Mars

Fans of the short-lived, but beloved, Veronica Mars probably recognize Rinna as Lynn Echolls a.k.a the mother of Logan Echolls (Jason Dohring). She only starred in three episodes, but Rinna's character definitely had an impact on the show and Logan. Fun Fact: her real-life hubby, Hamlin, played her husband, Aaron Echolls, on the show.

She Used to Get "Fired"

In addition to her time acting, Rinna also spends her time on reality shows, including NBC's Celebrity Apprentice. Rinna appeared on the show featuring Donald Trump and other celebs demonstrating their business skills not once, but twice. No, she never won, and was fired twice.

Singing and Impersonating Is Her Jam

Rinna decided to show off her dancing, singing, and impersonating skills when she joined ABC's Sing Your Face Off. She took on the appearance of many musicians, but the one that stood out was Justin Bieber. Surprisingly, she was pretty good.

She Once Cut a Rug

She even took a stab at ABC's other hit competition series, Dancing With the Stars. On Season 2, she was partnered with Louie van Amstel. Unfortunately, she was eliminated during round seven, but when you're up against Drew Lachey, it's kind of hard to compete.

Rinna definitely isn't shy at trying new things, so I think she'll be fine on RHOBH. Even if the ladies do eat her alive, I'm most certain Rinna will be able to handle herself just fine.

More like this
‘RHOBH’ Newcomer Sheree Zampino Is Still Close To Ex-Husband Will Smith
By Brad Witter
What’s New On Netflix: A Victoria Justice Rom-Com & The Return Of David Letterman
By Arya Roshanian
Twitter Is Upset About The 'American Idol' Top 3 Results: "Who TF Is Voting?"
By Jake Viswanath
Stormi Just Walked A Red Carpet With Mommy Kylie Jenner & Daddy Travis Scott
By Hugh McIntyre
Get Even More From Bustle — Sign Up For The Newsletter