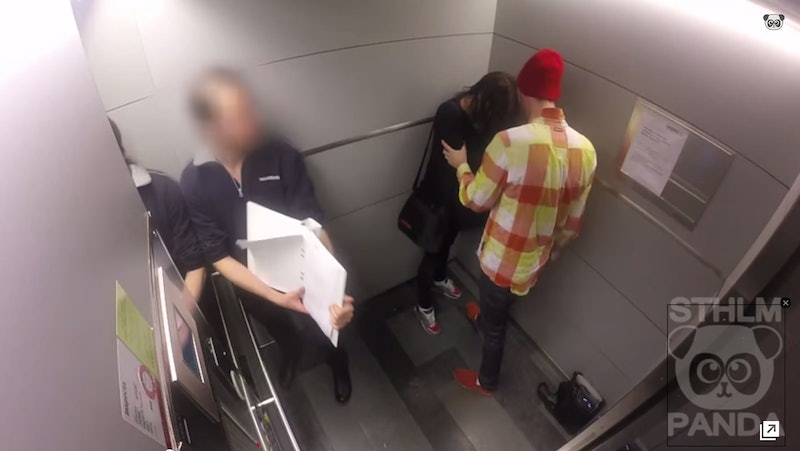 It's easy to rally against domestic abuse from the comfort of home or behind the safety of a computer, but what about when faced with a real-life public scenario? That's the question driving a new viral video that shows a man pretending to abuse his girlfriend in an elevator. The video is one of many YouTube shorts from the Swedish prank and "social experiment" group STHLM Panda. In reality, the man and woman are actors conducting a social experiment, but to the onlookers in the elevator, this is a serious case of verbal and physical abuse.

More shocking than the abuse itself, however, is the reaction of the bystanders (or lack thereof). According to Mashable, of the 53 bystanders that passed through the elevator, only a single one intervened. That means that of the total number of "participants," less than 2 percent were willing to publicly confront a situation of domestic violence. These numbers are particularly unsettling in light of the recent spotlight on domestic violence following multiple NFL assault scandals. The fact that 52 bystanders were willing to walk out of the elevator after witnessing this abusive scenario points to a larger issue with lack of bystander intervention among our society.

In the video, for instance, one women has the audacity to ask the couple to let her off the elevator first before resuming their "argument." Another bystander walks out of the elevator after hearing the girlfriend ask for help. More than anything, then, this video demonstrates that, by ignoring situations of domestic and sexual abuse, idle bystanders essentially become complicit in an act of injustice.

Because I refuse to believe that people are this heartless, I'd like to attribute these reactions to an overall lack of awareness. Perhaps people don't know the proper way to safely handle these situations, or are afraid of "meddling" in private affairs. Both, of course, are no excuse for a lack of intervention, but they signal a greater need for education among the world's population. According to the Allstate Foundation's Purple Purse campaign, for instance, "two-thirds of Americans believe that domestic violence is a serious problem, yet just more than 1 in 3 have ever talked about it."

It is clear from this statistic that more discussions need to be had in order to alert men and women to the realities of domestic and sexual violence. Recently, Purple Purse spokeswoman Kerry Washington has done an admirable job of trying to alert the public to the concept of financial abuse, which is a factor in around 98 percent of domestic violence cases. Still, simply understanding the nature of abuse may not be enough to propel individuals to speak out against it. Hopefully, attaching public figures like Kerry Washington to the cause will encourage others to follow in her example, but I'd argue that it takes a video like the one from STHLM Panda in order to affect significant change.

My temporary suggestion for remedying the lack of bystander intervention, then, is to keep the videos coming. Keep the discussions rolling. And, lastly, continue to speak out against domestic violence whenever and wherever possible. Only then can we hope to institute a paradigm shift away from our current climate of abuse. Of course, it is also necessary to educate individuals as to how to properly intervene if they witness suspicious behavior on the street or, say, in an elevator. The reaction of the one women who intervened in the STHLM video, however, seems like an exemplary model. Upon witnessing the conflict in the elevator, she stares the man straight in the eye and says, "If you touch her again, I'm gonna call the police." While this might not be effective in all instances, it's certainly a good place to start.

More like this
Is TikTok’s “Villain Era” Trend Just An Excuse For Bad Behaviour?
By Chanté Joseph
What The History Of Pride Month Means For Celebrations Today
By Jay Polish
TikTok's Favorite Bartender Thinks Mimosas & Bloody Marys Are Out For Brunch
By Alexis Morillo
How To Decorate Your Home Like A Coastal Grandmother
By Emma Garza
Get Even More From Bustle — Sign Up For The Newsletter