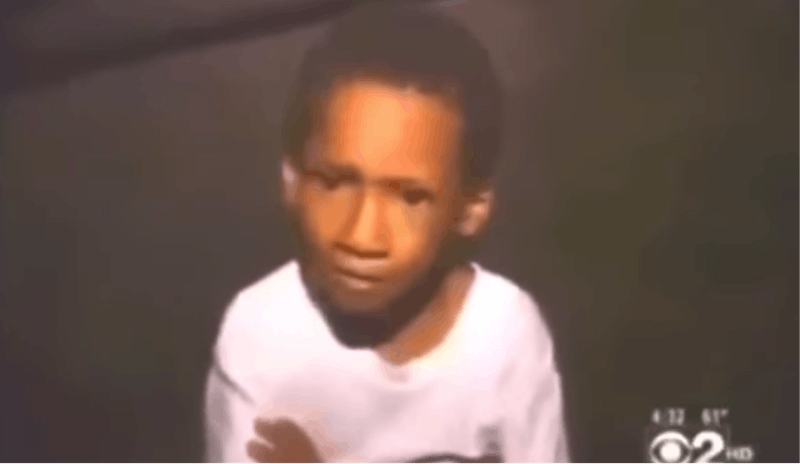 Here's a throwback to an extremely disappointing moment for television journalism, in case you needed your daily reminder that people are sometimes awful: In 2011, a CBS affiliate station in Chicago was caught manipulating a 4-year-old boy to sound like a thug by editing a filmed interview of him. The interview, which took place this past August, happened as part of the network's report on a shooting that was being investigated in the area. The interviewer asked both this little boy and a young girl, both of whom happened to witness the shooting, about their thoughts on it (which I'm pretty sure was already overstepping some boundaries, because I don't see any parents nearby or a name credited to the interview) and managed to entirely twist the little boy's response, and even call it "disturbing".

And it does seem disturbing, the first time you hear it. The little boy says, "I ain't scared of nothing," which prompts the interviewer to ask, "When you get older, are you going to stay away from all these guns?" First, let me be clear that in no way is this an appropriate question to ask a 4-year-old and already reveals some intention for a set-up. The little boy replies, "No," and when pressed further he says, "I'm gonna have me a gun."

In the version that aired, that's where the interview ends, making this kid sound like he is destined to perpetuate violence. But the actual unedited version reveals (SPOILER, turn back now!) that the boy almost immediately elaborated that he will have a gun because he intends to become a police officer. That's right: this kid who wants to be a cop and right the violence that he frequently watches in his neighborhood was wrongly painted to be a future thug.

To some small credit, the station realized the error released a formal apology through Gawker:

We accept responsibility for the mistakes that were made, both in the reporting and editing of the story. The video of the child should not have aired. As soon as news management identified the problem, they took immediate steps to ensure that the video would not air in subsequent newscasts. In addition, we have followed up with our employees to make sure that we all have learned from the mistakes that were made.

Still, this isn't the kind of error you should "realize," but one that should never have been made in the first place. You can see the edited versus the unedited version here:

More like this
How The City Healed Five Years On From The Manchester Arena Attack
By Ella Glover
How To Support Gun Control Reform Right Now
By Morgan Brinlee and Carolyn Steber
What The History Of Pride Month Means For Celebrations Today
By Jay Polish
The Viral TikTok “30,000” Sound Fits Nearly Every Scenario
By Courtney Young
Get Even More From Bustle — Sign Up For The Newsletter