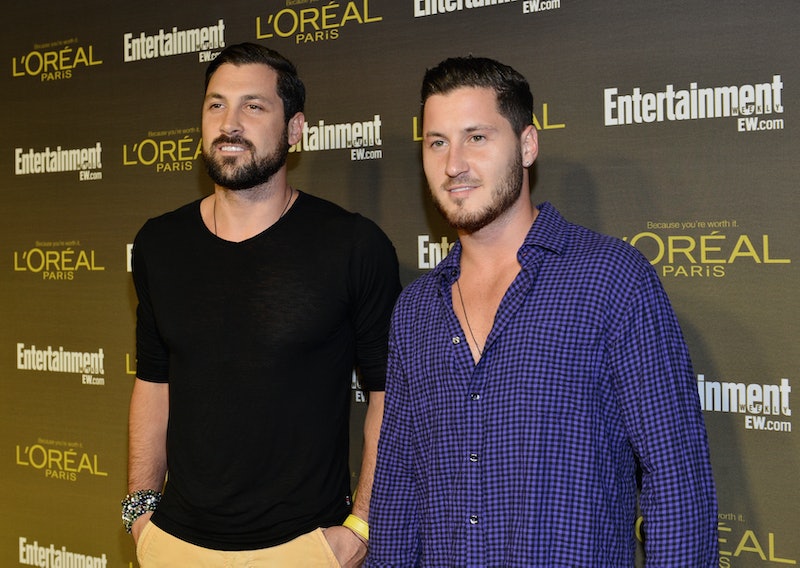 The Chmerkovskiy brothers sure are making a name for themselves on Dancing With the Stars, and not just for dancing. Maks Chmerkovskiy finally won himself a mirror ball with Olympic Gold Medalist Meryl Davis as his partner. Many of us speculated, and still believe, that those two had something going on behind the scenes as well. What do you know? The cycle is starting all over again with Maks' brother Val Chmerkovskiy and his partner Janel Parrish. How do Maks and Meryl compare to Val and Janel? Now that Maks Chmerkovskiy has left DWTS as a dancer, is his kid brother taking over in 'shipping as well as shimmying? It all seems a little too fast, and too good to be true. Let's compare the timelines of the two dance couples.

Val Chmerkovskiy has only been competing on the show since Season 13 in 2011. As Maks' brother, Val made a few appearances as far back as Season 2 when his brother first competed. Val has made it to the finals twice before. Now, he and the ABC Family actress seem to be on the track to succeed. Their scores are solid. Their chemistry has got the fans buzzing in the way we haven't seen... in about a year, actually. Is romance the winning DWTS formula we didn't know about? Let's look back at these two dynamic duos.

Janel Parrish described meeting her partner as a type of "first date." Was this a sign of things to come? Their chemistry was apparent instantly.

But they're still not quite to Maks and Meryl level yet. Let your older brother show you how rehearsal chemistry is done, Val...

How The Rumors Started Flying

Thank a paparazzi photo for that... besides their undeniable cuteness. But with Maks and Meryl, it was clear from Day 1.

Good gravy. This freestyle pushed many a reality 'shipper over the edge. This was the Finals. It had only been building up until that point. "Maksyl" may have never kissed on stage, but they got pretty damn close. The sexy not-kiss was copied by their mini counterparts until recently.

Janel and Val locked lips just last week on the show. While it was a bit hokier than the tease above, it's still an important landmark.

This is the famous first instagram of Maks and Meryl outside of rehearsal. Just casual platonic day drinks and platonic body language with your platonic dance friend — not!

In May of this year, before he ever met Janel Parrish, Val Chermerkovshiy compared his brother's love for Davis to King Kong in an interview with Zap2it. "He loves her probably more than I have ever seen him love another woman before," the younger Chermerkovshiy said. "He's so gentle with her because he wants to see her shine. He doesn't want to hurt her. It's a love that is bigger than a kiss or a label." Weird. But promising?

Most of Janel and Val's Instagram outings are for rehearsal or a public appearance. This one, however, is decidedly private and pretty adorable. Plus, I have to give Val props. Guys can do sexy Halloween too!

Post-victory, the original duo are taking their signature chemistry to a different stage for one more bonus performance week in New York. In October, it was announced that the Maks and Meryl Reunion Show would kick off December 17. While Val Chermerkovskiy will be performing, Janel Parrish will not. His former DWTS partner, Zendaya, appears to be taking her place. Perhaps the actress couldn't fit additional dancing into her Pretty Little Liars schedule. It can't mean that their love is fake, can it? Can it???

And Of Course, The Double Date

I mean that's what that was, right? The October 2014 outing was pretty disgustingly cute. Maybe the four of them spent their non-romantic dinner non-romantically laughing at America for speculating about how non-romantic they are. Maybe.