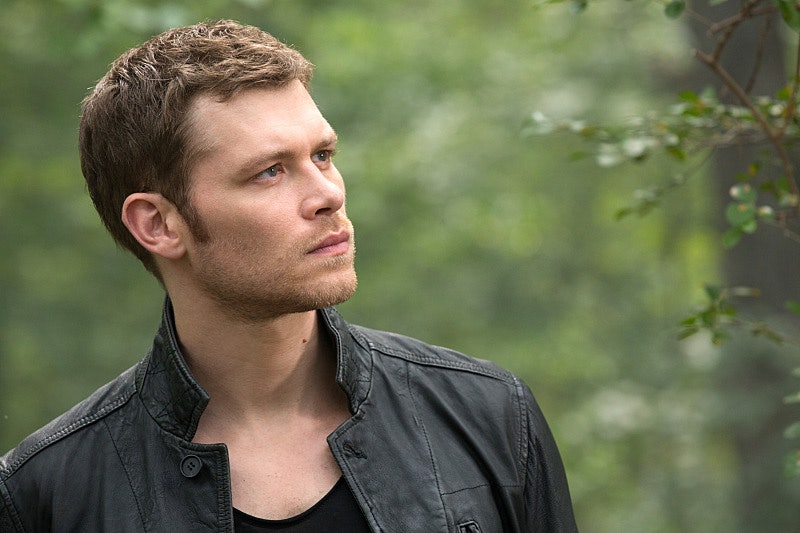 And just like that, the one good parental influence in Klaus' life has disappeared once again. Monday night's episode of The Originals "Chasing the Devil's Tail" resulted in Klaus killing his real father as a way to protect Hope. But let's back up for a minute. We kick things off with Elijah trapped inside a tormented slumber courtesy of Esther. (Moms, amirite?) Luckily, Klaus knows exactly what he needs to wake his brother up (petals from a special kind of orchid he'd seen his mother use on his father back when he was a child). The trouble was knowing where to track one down. Which is where Klaus' father, Ansel, comes in. He offers to show Klaus where the flower is located in exchange for some much overdue father-son conversation.

Of course, being typical Klaus, it takes him a while to shove his anger aside and actually warm to the idea of what a true father figure is supposed to be like. True to form, Ansel appears to be just as majestic and stoic as you'd expect a great and powerful man to be. Klaus even admits that he could see Ansel as someone he would've enjoyed looking up to. However, his rescue mission is too little, too late. After learning that Ansel knows that Hope is still alive (due to their shared wolf connection), Klaus kills the very man he could've grown to love to help ensure the information will never find its way back to Esther.

It was a heartbreaking moment and quite possibly the first death ever that Klaus felt any remorse over. When Elijah wakes, Klaus shares with him what he has done and expresses just how much he wanted to trust his father. However, his love for Hope trumps everything else. He could never forgive himself if something were to happen to her due to his selfish desire to have a decent father in his life. So he did what he thought was best in an impossible situation. And while I'm not sure if it was the right decision, it's definitely the most selfless act we've seen from Klaus in a while — possibly ever.

I know, it sounds strange, right? I mean, how can killing your innocent father be selfless? But for Klaus it was most likely one of the biggest struggles he's ever had to make. Yes, he's killed both of his parental figures before, but that's only because they pretty much deserved it. Here Klaus actually found someone he could consider to be a role model. But unfortunately he knew too much. If it was anyone else's life on the line, Klaus probably would've risked it. But since it was his daughter, he couldn't take the chance. He wants to be a better father than he, himself, has ever known. And who can really fault him for that?

The only question that remains then is… if Ansel is no longer around to spill the beans, how does Esther potentially discover Hope is still alive? I guess we'll just have to wait and see.

More like this
Selena Gomez’s ‘SNL’ Hosting Debut Had Twitter Gushing Over ‘Barney’ & Wigs
By Stephanie Topacio Long
What’s New On Netflix: A Victoria Justice Rom-Com & The Return Of David Letterman
By Arya Roshanian
'Bridgerton' Star Nicola Coughlan Confirms Season 3 Will Focus On Colin & Penelope
By Grace Wehniainen and Alyssa Lapid
The Time Traveler’s Wife Book Has A Heartbreaking Ending
By K.W. Colyard
Get Even More From Bustle — Sign Up For The Newsletter