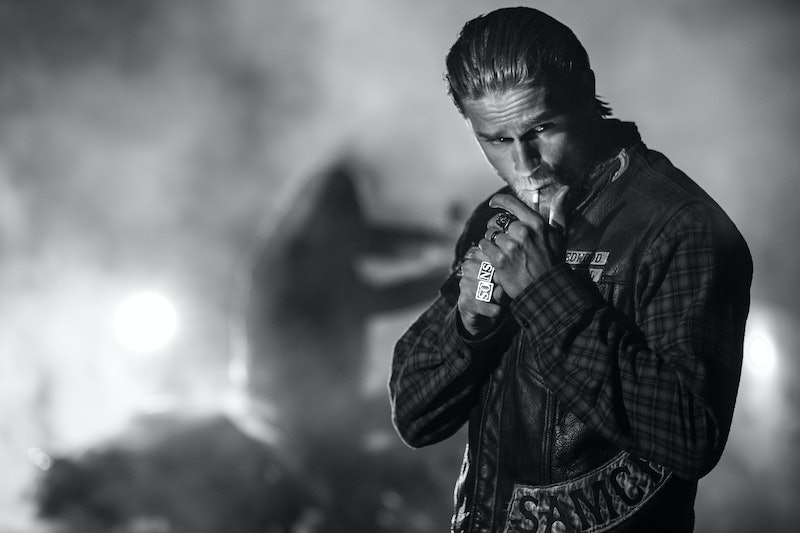 Charming has seen a lot of death since Sons of Anarchy first revved up onto our small screens, but there's one person's fate that's always been called into question and that's SAMCRO's acting Redwood President. That's right, folks — odds are Jax Teller will die by the end of SoA. There's no use in denying it. Between the poster imagery and Hamlet connections, it just seems to be the inevitable outcome of this tragic biker tale. And with only three more episodes of SoA left, it's only a matter of time before Mr. Mayhem comes to collect. The one question that remains is: how will it happen? How will Jax die when the Grim Reaper rears its skeletal head?

Obviously, there are several different ways this pivotal moment could go down, though it's certainly a difficult topic to even think about. I mean, the guy may be teetering on the brink of insanity, but damnit if I'm not still seriously attracted to him and will be positively crushed to see him go. (So I gotta thing for bad boys. What of it?) Truth be told, part of me always wished Jax would eventually escape all the murder and madness that this life of crime has provided. But alas, I fear we've reached the point of no return.

So if it's going to happen, I at least hope it's a death worthy of such a compellingly corrupt character. And not to get all morbid on you or anything, but I've managed to compile a few different scenarios of how I believe Jax's impending death will be carried out. Just be sure your tissue boxes are fully stocked and at the ready.

The SoA Organization Will Vote To Have Him Killed

A few episodes back Jax made the rather unwise decision to kill SoA's President of the Indian Hills charter, Jury White, right in front of one of his loyal members without bringing it to a proper vote (as is club policy). That's not exactly something that can simply be swept under the rug and forgotten about. Jury's crew is going to want justice for their fallen Pres. And they certainly have a strong enough case to take to the SoA organization, who could very well decide that the only way to rectify Jury's death, is to offer Jax that same fate. A life for a life, as it were.

August Marks Will Get His Revenge

He may be in jail for the time being, but something tells me this isn't the last we've heard of Damon Pope's successor. We've seen firsthand how he's handled betrayal in the past (RIP, Bobby), so it's hard to even fathom what kind of slow and torturous death he has planned for Jax when he gets out. So for the sake of all my future dreams and nightmares, I sincerely hope August doesn't make bail.

In what would definitely be considered the best case scenario, it would be refreshing to see Jax sacrifice himself in order to save a member of the club or his family. It would give him a small piece of redemption to combat all the bloodshed he's caused in his downward spiral into darkness. And can you imagine if he died saving Gemma, whose lies are what set all of this into motion? That punishment would be a fate worse than death for SAMCRO's matriarch.

He'll Take His Own Life

There's been a great deal of speculation in the past about whether or not John Teller willingly rode his bike onto the highway, knowing full well it had been tampered with. Perhaps that served as Kurt Sutter's way of foreshadowing how his son would eventually go. What if Jax, after finally learning that Gemma is responsible for Tara's death, is so overwhelmed with guilt at the unnecessary pain and destruction he caused everyone that he opts to take his own life as punishment?

Abel Will Kill Him

OK, I'll admit I kinda got carried away with this one. But just on the off chance that Sutter really wants to throw us a curveball, what if Abel ends up killing his father, whether it be by accident or intentional? After all, he's spent five years being constantly surrounded by death and anger. Some of that was bound to rub off on him. It's just about as disturbing of an image as you can get, but it definitely has a Shakespearean ring to it and leave the audience knowing that Abel is, in fact, doomed to follow in his father's murderous footsteps. Sons of Anarchy would officially come full circle into the next generation… in the most tragic and depressing way possible.