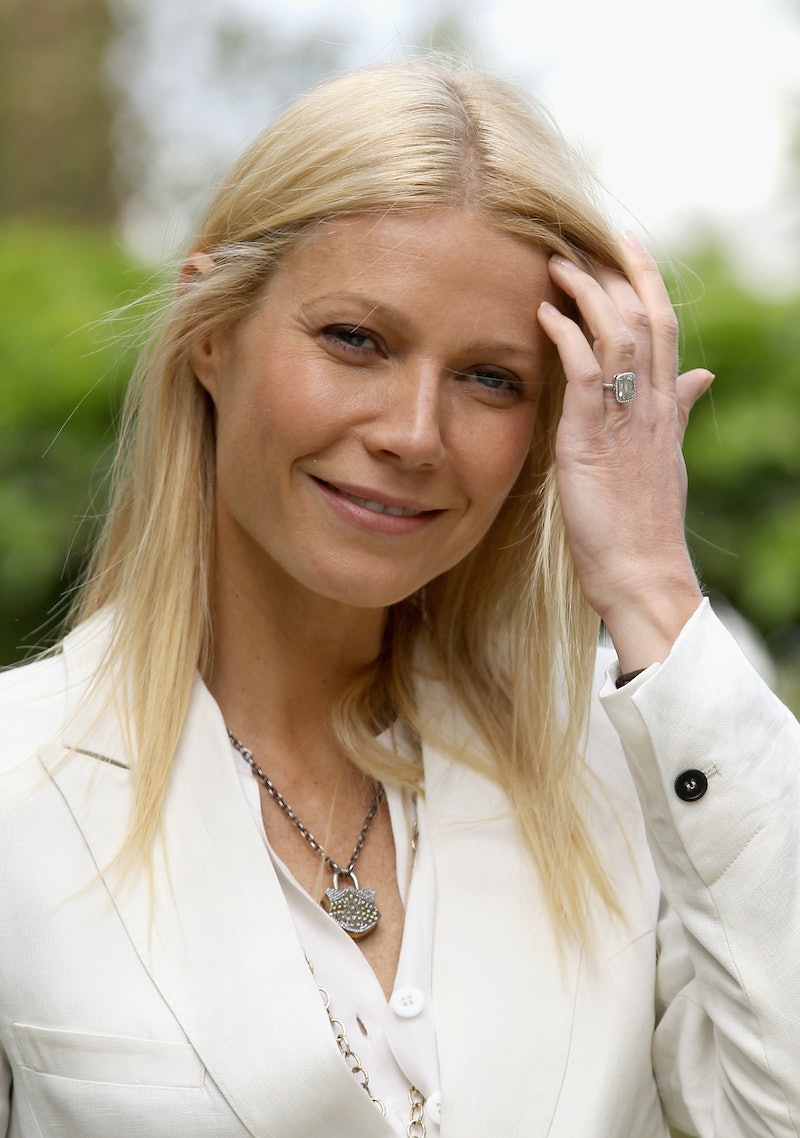 Listen, I think we all know by this point that Coldplay's latest album, Ghost Stories, was an entire nine-track tribute to the romantic troubles that frontman Chris Martin was experiencing at that time — notably, Martin's separation from Gwyneth Paltrow. Although the two are exes so amicable that there are always rumors that they're about to unconsciously couple, it's a kind of an unspoken fact that Martin dealt with his feelings about the split via the songs on Ghost Stories. However, as it turns out, there was at least one song on the album that had nothing to do with Paltrow, more or less. According to E! Online, "Sky Full of Stars" was inspired by Katy Perry. Sorry, what?

This revelation is particularly confusing because Perry and Martin have never been linked romantically. You'd think that if a song on the romantic, mourning album wasn't about Paltrow, then it would be about Martin's current rumored girlfriend, Jennifer Lawrence. (Not that I believe they're actually dating, but the rumors say what the rumors say.) However, his Beat x Beats webcast went in-depth on revealing the process through which Coldplay wrote and produced the song with cowriter Tim Bergling. Apparently, the idea was sparked by listening to a lot of Perry.

"I'll tell you the truth: I was listening to a lot of Katy Perry," said Martin. "A lot of her songs have the same chord sequence the whole time. Your body feels comfortable with them and then the melody's changing on top, so there's a groove you really get into and then also you're kept interested." All right, so that isn't exactly a grand love declaration indicating that rumored beaus Diplo (for Perry) and Lawrence (for Martin) should be nervous about the two artists hanging out and making beautiful music together — figuratively or literally. However, it's very unexpected, unless you already think to listen for it.

So if you've been listening to "Sky Full of Stars" and thinking that it reminds you of something you can't quite put your finger on, apparently that illusive thing was a Perry song. It's a Perry song if all of Perry's songs were written by Coldplay, which, in hindsight, is a pretty apt description to be honest. Whether that makes the song better or worse in your book is a matter of personal taste, but all this means to me is that Perry and Martin should do some kind of duet or collaboration as soon as possible. Clearly when you put the two of them together, hit songs happen. Sorry, J. Law: Maybe the next Coldplay album will have a musical shout-out to you.

More like this
Oops! Katy Perry Fell During 'American' Idol & Twitter Loved How She Reacted
By Jake Viswanath
Britney Spears Set A Wedding Date With Fiancé Sam Asghari & Previewed Her Dress
By Bustle Editors
The 1st Photo Of Priyanka & Nick's' Baby Comes After 100 Days In The Hospital
By Jake Viswanath and Hugh McIntyre
Post Malone Reveals He’s Going To Be A Dad
By Hugh McIntyre
Get Even More From Bustle — Sign Up For The Newsletter