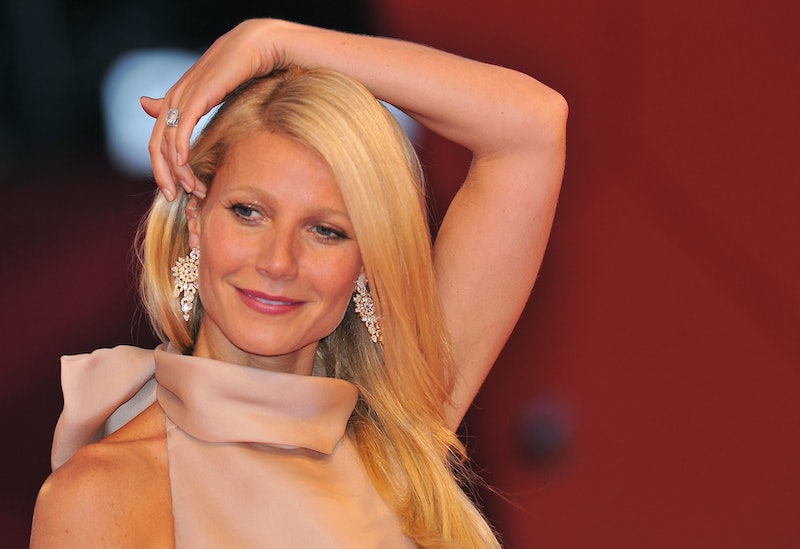 I'm thinking that Hollywood’s most talked about split of 2014 is already getting stitched right back up. Yes, I’m talking about Chris Martin and Gwyneth Paltrow who famously announced that they were calling it quits through a post on Paltrow’s lifestyle blog Goop. Thanks to how bombastic they were with their announcement, we got the phrase "consciously uncoupling" to add to our celeb blogging repertoire, as well as two noodle-y blonde people headed towards divorce after 10 years of marriage.

After the split was announced, the Coldplay frontman moved on to Hunger Games actress Jennifer Lawrence, and the kale devotee started a relationship-ish thing Page Six called "openly dating, but behind closed doors" with Glee producer Brad Falchuk. While all of this apparently happened, all of it was maddeningly unconfirmed — or should I say, consciously unofficial? Well, now that Martin Lawrence has ended, and Paltrow's started blogging about about enjoying martinis and pizza, and the world seems very much changed and different since the pair broke up back in March.

But it really just looks like Martin and Paltrow are, as Bustle's Allyson Koerner, puts it, "unconsciously coupling" — meaning they don’t even realize that they’re going through all the motions of getting back together. Sure, reports of the two reconciling may not be official and everything might be hearsay, but there are so many indications leading me to believe they're working things out.

Here are a few theories I have on why Martin and Paltrow are getting back together:

Remember back in August when Queen Bey took a photo inside Paltrow's LA home and everyone thought that the "Drunk in Love" singer was getting divorce advice from the Goop creator? What if it was the other way around? Bey and husband Jay Z got married in 2008, and they battled divorce rumors all summer before, reportedly, renewing their vows in October. It's totally possible that Mrs. Carter swooped in to give Paltrow a pep talk. At least, I would call her for one if I had Beyoncé on speed dial. Seriously, if Bey was asked to come in and fix it, then consider it fixed.

Martin Did a Surprise Performance for Paltrow

After saying so long to Jennifer Lawrence, and hardly giving the public any photographic proof, Martin made his first public performance since his breakup at the amfAR gala in LA which was coincidentally hosted by his estranged wife. It was one of those surprise deals, which looks like either a last minute addition or as a way to get into Paltrow's good graces. And I think it worked, because Paltrow introduced Martin and his Coldplay band mate Jonny Buckland saying,

This brilliant singer-songwriter has sold 8 million records, has won every single award that there is to be won, especially Father of the Year, which he has won consecutively since 2004. I am speaking of Chris Martin, and the incredibly talented Jonny Buckland, who together make up one-half of the legendary band Coldplay.

Did anyone else notice Paltrow got a lil' bit carried away with the gush of compliments for Martin, whereas Buckland's were the equivalent of a sneeze? It's almost like Paltrow forgot thatthe guy was going to be on stage too because she realized her ex was back on the market and that he has the sweet, delicate voice of an angel.

In case you missed it, Paltrow posted on her healthy, Whole Foods-loving, green detox juice-drinking site, Goop, that pizza is awesome. Who is this person? What has she done to always-go-organic Paltrow? More importantly, do you know who else likes pizza? Like really, really, really lurves it?

That's right, Martin's supposed ex, Jennifer Lawrence. Paltrow is trying to show Martin that she can hang with the normals and eat fast food like the kind Martin fed their kids Apple and Moses after their split. That, or Paltrow's doing a very subtle passive aggressive jab at her separated husband's choice in girlfriends. The Oscar winner also wrote about how pizza, martinis, cigarettes, and red lipstick are OK indulgences, but you always have to be sure to be healthy and do what's right for you in the long run.

While Paltrow and Martin might be playing it as far under the radar as possible, it sure seems to me that they're headed back to a reconciliation — even if they don't know it.