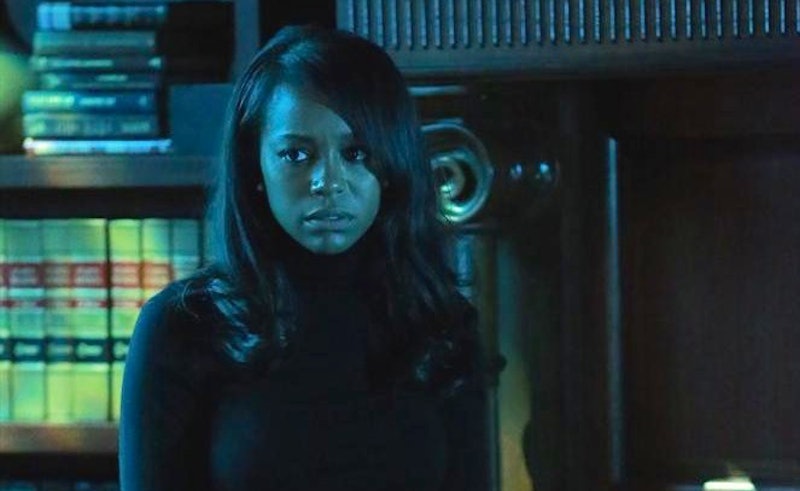 The hour is almost upon us. The giant game of "Clue" that watching How To Get Away With Murder seems like is drawing to a close in Thursday's winter finale. Who killed Sam? At this point, everyone seems guilty. Rebecca is on a mission. Annalise guaranteed Sam's day in court. Even Bonnie has more motive at this point than the kids we've seen taking care of his body. I have a sneaking suspicion that Sam's death will play out like dominoes, implicating each person in that fancy wall-papered for something. I don't think any single answer could surprise us at this point. However, if I had to pick one person, I predict that Michaela killed Sam on HTGAWM while defending Rebecca.

While I have been taking Michaela's extreme reaction to Bonfire Night as a normal behavior given the circumstances that her cohorts should be adapting as well, it could be a red flag. Connor is more pissed at her than usual. Laurel is nicer to her than usual. Something is up.

Here's what I think went down: Rebecca went to confront Sam. Four of the Keating Five showed up to study or confront Rebecca. While all of this confronting was going down, Sam attacked Rebecca and Michaela attacked Sam. More like "How To Get Away With Manslaughter," am I right? Maybe it's too soon, but here is my evidence that Michaela Pratt may be the killer after all:

If we look back at the various flash forwards, remember that Michaela and Rebecca are the first two that we see close to Sam's body. Wes, Connor and Laurel enter the room and the two other girls are sitting. Well, Michaela is more like crouching. Is that because only Rebecca and Michaela were in the room with him when he was killed?

Now let me try to do my best Dexter Morgan impression. You know, his day job as a blood splatter analyst. Rebecca is covered with blood. That might lead you to believe that she's guilty. She is at the very least an eye witness. However, I think Sam's blood got on her when he was hit from behind. The blood is either coming from the side or the back of his head. I think, as per Rebecca's "confession" to Wes, Sam was going after Rebecca with the intent to kill. However, I think it may have been Michaela that came to Rebecca's rescue and smashed Sam with Lady Justice.

Pardon me, but to quote Asher Millstone, she "gots the trophy" — which is not great for her innocence. Michaela has the trophy in her possession at the time when it was used to kill Sam Keating. If she arrives at the house in the middle of the action, is she likely to let go of her stolen prize?

Also, I've noticed something during my umpteenth re-watch. The trophy scales are missing in the Bonfire Night scenes. Where are the scales? Just like Michaela's wedding ring, this is going to be a problem later on. Though, I honestly think that the engagement ring is the least of Michaela's problems. She left that dinner with Mrs. Walker pretty mad, and rightfully so. It would be totally expected and excusable for her to "lose" her engagement ring.

The fact that she so quickly raised a hand to her future mother-in-law on the same night that Sam Keating was struck to death is either a major red herring, or a clue. I'm not saying that Michaela has anger-management or aggression issues. However, now we know she has a fighting instinct, especially when threatened. Even if she did kill Sam, at least she's not as rude as Aidan Walker's mother!