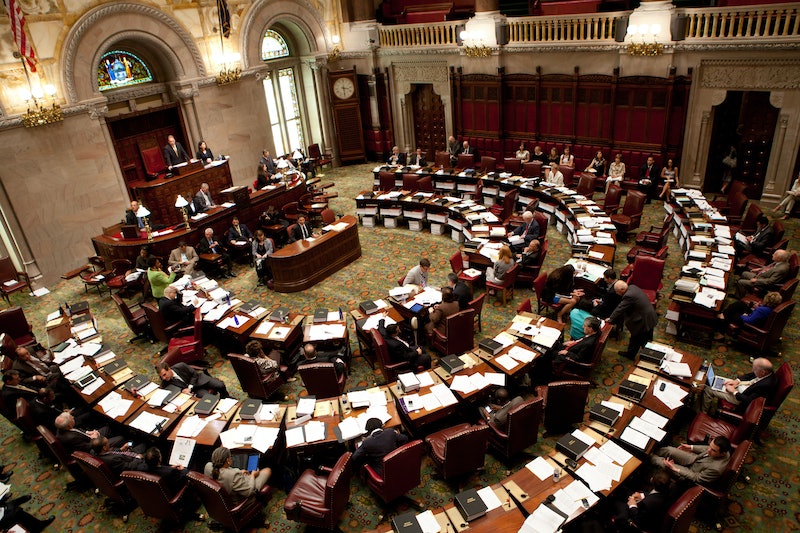 The Senate voted to reject the Keystone XL Pipeline project on Tuesday, with a narrow final tally of 59-41 — a single vote shy of passage. The House-approved version of the bill was passed on Friday.

Had the Senate approved it, President Obama likely would have vetoed the bill. NPR reported that while he stopped short of using the word "veto," the president did ask Congress to hold off until the extended State Department review of the project has been fully completed.

Before this afternoon's vote, a floor debate saw several Senate Democrats voicing their opposition against the Keystone extension. According to NPR, Sen. Barbara Boxer, chair of the Environment and Public Works Committee, said that oil from the pipeline would be exported instead of supplying American markets, adding,

We're going to see higher gas prices because of this.

North Dakota Republican Sen. John Hoeven countered that the project would benefit his state by providing his state's oil with another transportation channel. North Dakota now largely relies on a congested rail system.

The rejection of Keystone marks the ninth time the bill has failed to pass Congress. The project aims at transporting crude oil from Canada to the Texan Gulf Coast. Supporters argued that the pipeline would allow North America to gain energy independence, indicating the enormity of the project, but environmentalists warned that it would emit catastrophic amounts of greenhouse gases into the atmosphere.

The rejection of the bill is a blow to the beleaguered Louisiana senate incumbent, Democrat Mary Landrieu. Landrieu had managed to gather 59 supporters for the bill before going into the vote, but the last vote that would have given the bill its required 60 to pass proved to be unattainable. Democratic Majority Whip Dick Durbin was considered one of Landrieu's last options, but he ultimately voted against it.

The bill has become an important part of the Louisiana Senate seat race, as Landrieu faces an uphill battle against her Republican challenger, Rep. Bill Cassidy. Both have aggressively campaigned on their support for the state's oil industry, and Landrieu managed to persuade her fellow Senate Democrats — who have long prevented votes on the pipeline — to hold a vote at her behest, reported the National Journal. The Louisiana incumbent is a co-sponsor of the pro-Keystone legislation, in her bid to convince her state that she walks the talk on pro-oil policies.

Landrieu also went up against strong opposition from environmentalists, who have repeatedly said that the project would be an environmental disaster, and really not as financially profitable as previously thought. Polls show that Cassidy is cruising ahead of Landrieu in the Louisiana race that will take place on Dec. 6.

Supporters and opponents of the bill will have to wait until January for any further action, reported Politico, as incoming Congress Republicans have vowed to make its passage one of their priorities. Here is a look at what's next for the controversial pipeline project.

More like this
Michigan’s Governor Is “Going To Fight Like Hell” To Protect Abortion Access
By Andrea Zelinski
What Is Barack Obama’s Net Worth? He Makes *Way* More Now As An Ex-President
By Hugh McIntyre
23 Abortion Funds In States With Trigger Bans To Donate To
By Emma Carey
How To Fight For Reproductive Rights, Based On How Much Time You Have
By Courtney Young
Get Even More From Bustle — Sign Up For The Newsletter