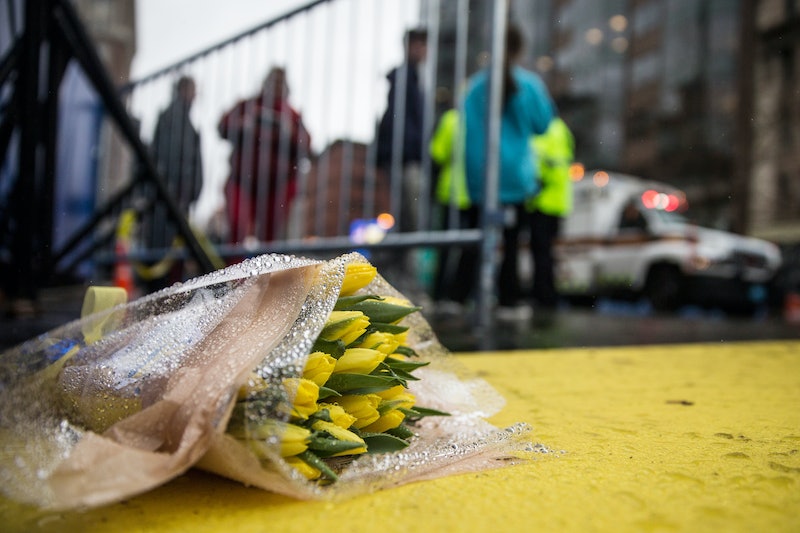 It's been an exceptionally tough year and a half for Boston after the bombing at the Boston Marathon in 2014. Which is why it's shocking and honestly a little stomach-turning to hear word that writers Paul Tamasy and Eric Johnson have sold their script Boston Strong to Fox, and plan to start filming with director Daniel Espinosa in 2015, at the actual Boston Marathon, or exactly two years after the tragedy. This has all the makings of being a catastrophe, in my opinion from the perspective of an American who was not personally connected to the event. But, interestingly enough, both Boston's mayor and the governor have given their blessing to the project. So who is decide if something is "too soon?"

The first fictional film about 9/11 was Oliver Stone's World Trade Center, which debuted in 2006, just five years after the biggest terrorist attack on American soil. And even that felt too soon. I'm not sure what makes the Boston Marathon different—I don't want to be naive enough to say that it's because fewer people died, or because 19-year old Dzhokhar Tsarnaev was indicted and is awaiting trial currently. But I don't think two years is at all an adequate space of time for healing and for historical bias to pass.

Then again, I don't know. I really can't speak for the people of Boston since I am not one. And, without a doubt, the citizens of Boston have displayed extraordinary strength and solidarity since the attack; even the fact that the 2014 marathon went on is a testament to their spirit. And, as aforementioned, the mayor and governor of the city "feel it is a fitting tribute to the fighting spirit of a town that rallied from tragedy." Aaron Sorkin's Newsroom recently took on the event, and Bustle's Leah Thomas, a Boston resident who witnessed the bombing firsthand, found the HBO show's interpretation generous and respectful. But it easily could have gone down an uglier path.

And maybe it will be. But besides the obvious issues of too close a proximity to a historical event, there's also the fact that the book the screenplay adapts, Boston Strong: A City’s Triumph Over Tragedy, by Casey Sherman and Dave Wedge has not yet been released. Then there's also the fact that the events of the tragedy are still being investigated.

But, I suppose, it's wishful thinking to hope that a historical event be entirely "over" before it enters the world of film and television for artistic interpretation. There's no open and shut to history. And there have been extremely successful, beautiful and invigorating adaptations of major historical moments not long after their happening—I am thinking, of course, of Zero Dark Thirty. It's not my place as a bystander of the event to decide if the pain has subsided enough for the wound to be reopened in film, but two years is barely a blip when you are grieving. I can only hope that the film does truly focus on the voracity of spirit of Boston's residents, rather than the ugliness of the event itself.