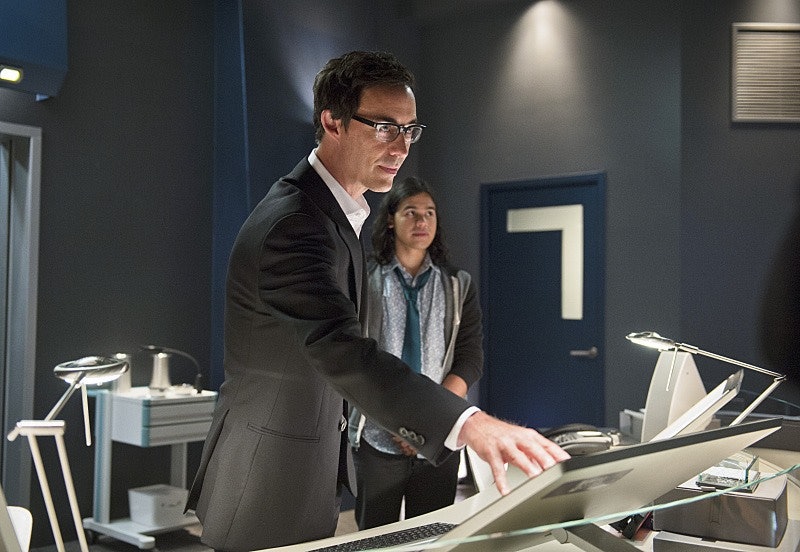 We have long suspected his intentions, but it now seems more likely than ever than The Flash’s Harrison Wells was involved in the death of Barry’s mother. After years of dismissing Barry’s testimony about the yellow blur that murdered his mother, Joe West has been digging up the details surrounding the mystery and unexpectedly turned to Harrison for help. At first it seemed that his questions were motivated solely by the parallels between modern metahumans and Barry’s description of what he saw that night, but it became abundantly clear once Joe pressed him too far that Harrison knows more than he is willing to reveal -- especially now that we know that he arrived in Central City a mere month after Nora Allen's death.

My suspicions about Harrison are heightened even further by the threat Joe received by the mysterious figure that raced through their house at the end of the episode. Even though Joe is digging through the past, he hasn't hit a close enough link to anyone else in the investigation to merit that kind of warning unless it was someone connected to Harrison. That, and it seemed like Harrison was a little too ready to defend himself in those meetings with Joe, like he had been ready for Joe to accuse him in his involvement for quite some time even though he had a supposed alibi.

In any case, it is clear that this supposed "cold case" is now anything but. Whoever is responsible for the death of Barry's mother is still out there and has some sinister motivation to keep it quiet, which means that Barry's father won't be getting out of prison anytime soon. In all the chaos of the last few episodes he has barely gotten any mention at all -- it'll be interesting to see if this new information leads Joe to try and clear his old friend's name, or if the threat will be enough to keep him off the trail.