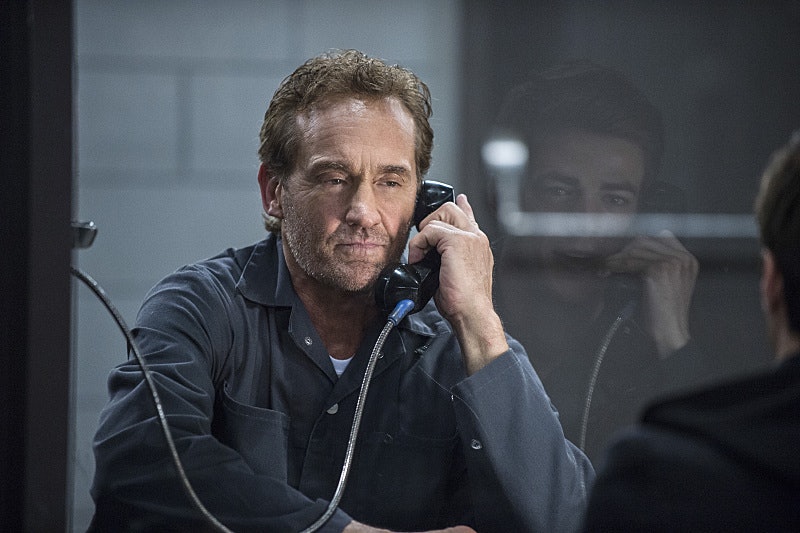 So far, The Flash has been off to an excellent start on The CW. I'm inclined to say I like it more than Arrow, though my opinion of Arrow is not to be trusted. Anyway, The Flash has already set up a few conventions that we can expect every week. Barry will be late to meetings. Harrison Wells will do something creepy in the last scene. And Barry's wrongfully convicted father will have a conversation with someone while in jail. That poor guy. Is Henry Allen going to get out of prison on The Flash ? There was some talk of prisons in last week's episode. It was ominous and reminded me of the "Arkham Asylum" whisperings happening on Gotham. Detective West remarked that the local jail would not be able to hold metahumans and Team S.T.A.R. Labs should start working on a solution, considering they got us into this mess. Are we looking at a prison breakout soon?

Last week's metavillain of the week, The Mist, almost accomplished it. Can I take a moment and say how much I appreciate that this show is justifying all the corny DC character names by having the adorkable Cisco Ramon come up with them himself? He's so proud of his puns and I can't ever be mad at him. Anyway, The Mist broke into the jail and caused quite a ruckus. We also learned that Barry has been plotting ways to break in and out of that facility for most of his young adult life. If Henry Allen does get out of there, will the breakout be engineered by a villain or a hero? The moral shades of grey are being tested on this show all the time. Everyone appears to be a villain.

In the comics, Barry's dad died in prison two years before Barry became The Flash. So we've already strayed considerably from the comic book origins of these characters. Not only is Daddy Allen still alive, he's caught a glimpse of his son's new status as a vigilante — though seemingly without realizing who the man behind the mask was. I hope The Flash won't follow DC Comics' path and have Henry die in prison. I like that Barry is avenging the living, and that an adult man is this show's version of a damsel in distress. However, with so many dangerous characters showing up in town, it's a possibility.

It's also possible that Henry gets out of jail the legal way. I know, crazy, right? Detective West believes in him now. Maybe they'll be able to find a lawyer (and a judge and a jury) to appeal his case and get him acquitted. Then father and son can be reunited and all will be well! What? A girl can dream.