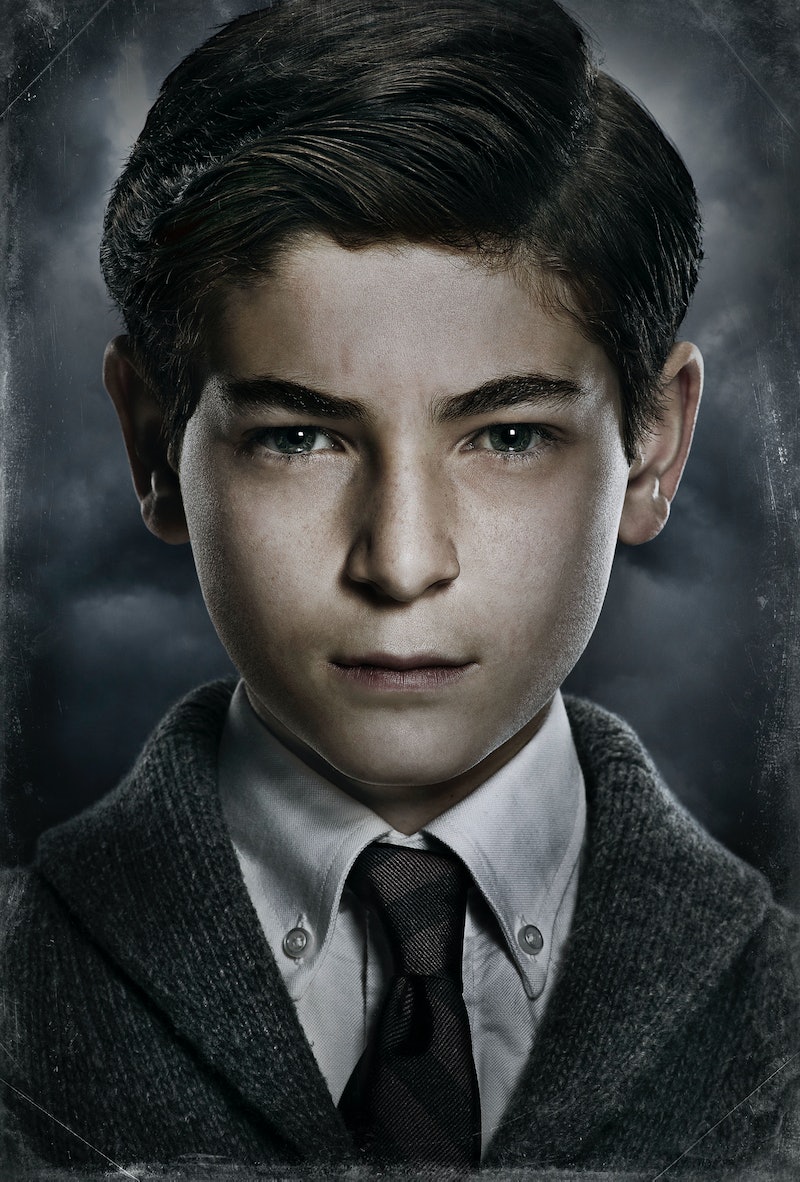 It doesn't seem likely that Gotham will give us a fully fledged Batman any time soon. It's more of a villain origin story than anything. The most action we've seen young Bruce get into is a fist fight with an equally scrawny school bully, some boxing practice, and an adorable food fight with Selina "Cat" Kyle. Even if the FOX series ran for decades, would they have to recast young Master Bruce? What would Gotham's David Mazouz look like as Batman? We know that the Batman "look" is protected by fans of all levels — or there wouldn't have been such a backlash over casting two-time Academy Award winner Ben Affleck in the role. Just for fun, let's see if Gotham's boy billionaire has what it takes and see what it could look like when Bruce Wayne ages into the Batman we're all familiar with.

I put the below photo of Mazuoz as Bruce Wayne through the "in20years" application. Gotham's grown-up Batman has got a strong eyebrow game and somehow a less steely expression than he had as a child. Seriously, this guy looks way too nice to be a take on Gotham's criminal underworld. I doubt this software is accounting for vigilante-level exercise, so he could have a more defined face in adulthood. Let's take a look, and then compare this Bruce to some other famous Waynes.

Look at those shadows — I think he could be the darkest knight of all.

Since the 1960s, West has been the original Batman in our hearts (even if you've only seen reruns), thanks to the classic Batman television series and accompanying 1966 film. Campy, charming, and not at all the angsty masked man we think of now. The television series also gave us the gift that was Eartha Kitt as Catwoman.

Gotham seems to be drawing a bit from the Tim Burton Batman era, particularly with Camren Bicondova as Selina Kyle. That girl is the spitting image of Michelle Pfeiffer. Now that I'm looking at him up close, David Mazouz could pass for a young Michael Keaton as well.

The '90s showed us a different kind of camp when it came to Batman. Gotham's Cory Michael Smith may never reach Jim Carrey-levels of facial elasticity as Ed Nygma/The Riddler in the 1995 romp Batman Forever, but he's getting pretty darn close.

Another classic for older millenials, 1997's Batman & Robin had George Clooney in the titular role. You don't need to see what he looks like under the mask, do you? He looks like George Clooney. Mazouz could grow into a Clooney jaw line. It's not impossible.

Remember when Christian Bale was Teddy Lawrence in Little Women and we all swooned, and then grew up and realized he was kind of a creep? That's just something I think about every Holiday Season. The Christopher Nolan Dark Knight trilogy may be the most iconic adaptation of Batman if it stands the test of time. It's definitely the grimmest. This franchise revolutionized the superhero genre as something we could take seriously, and then have fun with all over again. Do you think that the little boy on Gotham could ever reach Bale levels of brooding? I sure hope not.

You might recognize him as Christopher Pike in the JJ Abrams Star Trek movies, but Greenwood voices Batman in the animated series Young Justice . I only bring this up because, like David Mazouz, I could easily see Greenwood playing a kindly old Dad version of Bruce Wayne. You know, the Batman who hangs out at the grill and makes cheesy jokes and... smiles.

We haven't seen much of the "Batfleck," only a few teases. Similar to Clooney, it's hard to separate the actor from the character. Will he be our first scruffy Bruce Wayne? Hard to tell.

Some of my favorite takes on Batman are played for laughs. There's the Starkid production "Holy Musical, B@man," seen above and from the same parody artists that brought us Darren Criss as Harry Potter in "A Very Potter Musical." Ben Wyatt treated himself to a Dark Knight impression on Parks and Recreation. Recently, we had Will Arnett in The Lego Movie . Unfortunately, Gotham takes itself much too seriously to compare — at least when it comes to the heroes on the show.

Before you go, I made just one more mock-up of an older Mazouz with some... modifications. You know what? Now I can see it.

More like this
Margot Robbie Breaks Her Silence On *That* Viral 'Barbie' Moment
By Maxine Harrison
Lego Just Announced Its 'Black Panther' Set Release Date
By Maxine Harrison
‘RHOSLC’ Star Jen Shah’s Arrest & Legal Drama, Explained
By Brad Witter and Jake Viswanath
Twitter Is Unravelling Over Wolverine’s Return For 'Deadpool 3'
By Darshita Goyal
Get Even More From Bustle — Sign Up For The Newsletter