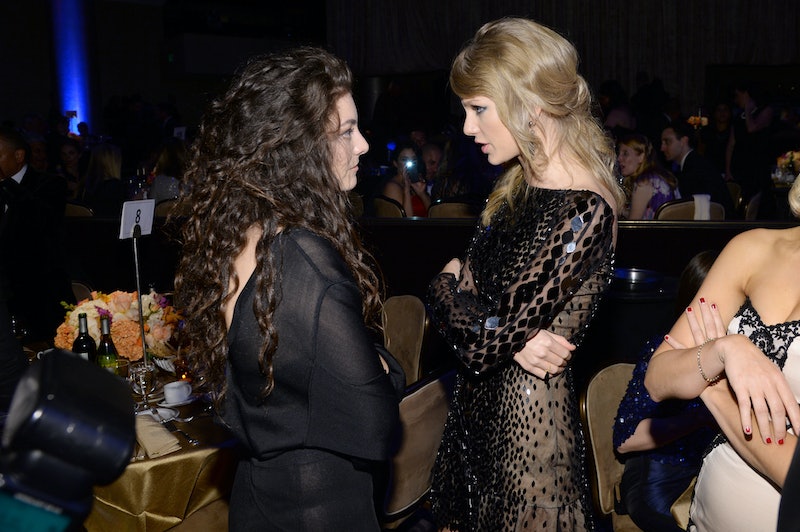 Oh, to be in the middle of that front row AMAs sandwich of Selena Gomez, Lorde, Taylor Swift and supermodel Karlie Kloss. The ladies looked to be having more fun than anyone else at the American Music Awards, and were seen laughing, dancing with Jessie J, and generally living the most perfect life in between each of their anticipated performances. Taylor Swift has become known for her front-row antics, notably her fearless and endearingly awkward dancing. But this time, fans noticed something a little peculiar about her seating situation: Selena Gomez and Lorde were sitting next to each other! I repeat, Swift BFFs Selena Gomez and Lorde sat next to each other. Now, it almost escaped me that Gomez and Lorde were involved in a few public 'disses' last year and have never really been seen to be canoodling or friendly, so this pairing seemed to come as quite a surprise to many fans of Taylor and followers of her tight-knit lady friend group, which seems to grow every year.

Because I hadn't been following the inner working of Swifties BFFs, I wanted to look back at the history of Lorde and Gomez since their little rift to see if they were really back on friendly terms or just hamming it up for the cameras. Back in September 2013, Lorde ignited the tension between her and Gomez when she told Rolling Stone magazine,

"I love pop music on a sonic level, but I'm a feminist and the theme of her song ['Come & Get It'] is, 'When you're ready come and get it from me.' I'm sick of women being portrayed this way."

Now, Selena being the classy lady she is, refused to be out-right bitchy in her retorts and handled the situation very casually (and openly smiling) when speaking on it in the November 2013 issue of Flaunt Magazine. In it she says, “That’s not feminism-[Lorde is] not supporting other women. That’s my honest opinion, that’s what I would say to her if I saw her. I actually covered her song in all of my shows that I’ve done so far. I’m not sure if I’m going to continue that.” And true to her word, Selena ditched the "Royals" cover and opted for a more girl-power rendition of "Roar" by Katy Perry.

Cut to early 2014, and while both girls were individually seen with their mutual friend, T-Swift, there was no indication that Gomez and Lorde had magically become friends. In a video for Gomez's March cover of Seventeen Magazine, she has no qualms with praising Lorde's powerful music and lyrics, but is quick to say, "she doesn't really like me, but that's all right." Could an even bigger show-down have gone down behind closed doors? The world may never know.

Even the love between Gomez and Swift has been tested, as it was reported early this year that Swift allegedly had to cut off Gomez after re-uniting with Justin Bieber. To think that Bieber could have been the demise of this lovely sisterly bond these two share is so sickening because... it's Justin Bieber. The girls have recently started their love fest once again, with Gomez openly supporting Swift's newest hit album, 1989, all over her social media. Now, this brings us back to front row at the AMAs, where some of the most powerful young women (and possible enemies) in entertainment were sitting together.

I am no body language expert, but by the looks of the arms crossed and very obvious oceans distance between Lorde and Gomez, we can assume that the girls aren't exactly the best of friends, but two strong young women who have put aside their differences to support their friend. And whatever happened before or after, they smiled, danced and gave Swift the spotlight she deserved for her special night. Now, I don't know about you, but those are some good friends.

More like this
Sadie Sink Would Escape Vecna From 'Stranger Things' With This Taylor Swift Song
By Grace Wehniainen
Selena Gomez Is Fine Being Single, But She Still Manifested Romance On 'SNL'
By Martha Sorren, Jake Viswanath and Jack Irvin
Taylor Swift's “Carolina” Theme For 'Where The Crawdads Sing' Soundtrack Is Here
By Jake Viswanath
'The Summer I Turned Pretty' Using “Cruel Summer” Has Twitter Begging Taylor Swift To Release A Music Video
By Radhika Menon
Get Even More From Bustle — Sign Up For The Newsletter