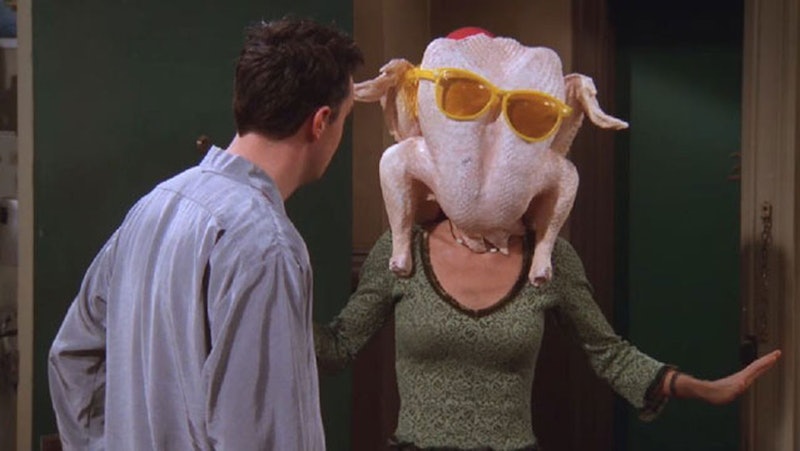 There are several factors which have contributed to me sucking at Thanksgiving in general (at least the cooking part; I am SPECTACULARLY skilled in the eating and drinking parts). One is that I have literally no idea how to cook and, if left to fend for myself on Thanksgiving, I would probably end up eating Ritz crackers and cheese, which is my go-to staple for pretty much every other meal in my life. The second is that, for the last few years, for some ridiculous reason, we always lose power on Thanksgiving. It is always unexpected and lasts for several hours, and the one time we didn't lose power, the ceiling in our house literally caved in. Like, plaster all over the basement and water and just general apocalyptic Thanksgiving fun (pro-tip: DO NOT put potato skins in the garbage disposal unless you TOO want to experience the magic of your plumbing turning against you).

The good news is, there are plenty of resources on the internet that make it possible for people like me to survive. While 20-somethings everywhere are fully aware of bacon hacks and mac and cheese hacks, I am now proud to present you with Thanksgiving hacks that will hopefully help you evade disasters as truly epic as mine:

No Peeler? No Problem!

In fact, if you have ever purchased a vegetable peeler with the sole intention of peeling potatoes, you just wasted however many dollars a peeler costs (never having actually purchased a useful kitchen item, I can't even ballpark that for you). All you have to do is boil potatoes and then immediately stick them into a bowl of ice water, and voilà, you can slip off the peels with your fingers.

Look, I don't know the first thing about making apple pie, except that it takes for-freaking-ever and you need a zillion ingredients to get the crumb top just right. But this Butterfinger Pie only calls for four ingredients (and if you didn't already have Cool Whip stockpiled in your house, who are you?), and can be easily replicated with similar candy bars.

Too Many Humans And Not Enough Stove Space?

That cooler that you packed away on the last nice day in summer is about to be avenged. You can put however many corn cobs you need in the cooler, boil the water separately, and dump the water in there. Close the lid and thirty minutes later, perfectly cooked corn. Game over, tiny apartment.

Use Aluminum Foil As A Roasting Rack

My home economics teacher from 6th grade would probably cry knowing that I don't own one of these after she spent—I kid you not—an entire week before Thanksgiving teaching us how to properly baste and cook a turkey, to the point where she literally quizzed us on it. But bunching up aluminum foil under the bottom of a turkey does the same trick of spreading out the heat so your giant meat thing gets cooked all the way. Go team!

Behold, the only thing on the planet that might make stuffing actually interest me as a food group: turning your stuffing into a waffle. You'll never have to compete for oven space for the stuffing again.

Every now and then, you open a pantry and realize all your bread has gone bad, but rarely will you open a fridge and discover it is devoid of beer. And now you can cook with it! All you need is self-rising flour, sugar, and of course, beer.

Turkey too dry? Add butter. Mashed potatoes lackluster? ADD BUTTER. I'm not just saying this because I am a butter-holic. I am saying this because usually by the time you realize something is less delicious than you thought it would be, butter is the only thing that will somewhat redeem you.

Screw Basters—Use Literally Anything Else Instead

Seriously, whoever capitalized on the creation of basters was a grade A con-artist. All you are doing is putting liquid on a bird. Assuming you are still sober enough to hold one steady, you can use a ladle, a big spoon, or even a cup.

Put Your Gravy In A Thermos

There is no Thanksgiving disappointment more intense than lukewarm gravy, and I just said that as a person who once accidentally lit butter on fire in the microwave by leaving the aluminum foil on. A thermos won't look super classy at the table, but it will do the trick, and let's be real: it was way too late for this to be a classy affair anyway.

Ta-daaaaa! If you make enough of it and put it in a dish it looks just as homemade as real mac and cheese. If you squint.

Give Up And Call Boston Market

More like this
This TikTok Hard Seltzer Hack Involves A Milk Frother
By Alexis Morillo
Is The Insta-Famous Always Pan Actually Worth It?
By Jessica Goodman
The 9 Best Easy-To-Use Coffee Makers
By Vanessa Spilios
The 4 Best Blenders For Nut Butter
By Elizabeth Enochs
Get Even More From Bustle — Sign Up For The Newsletter