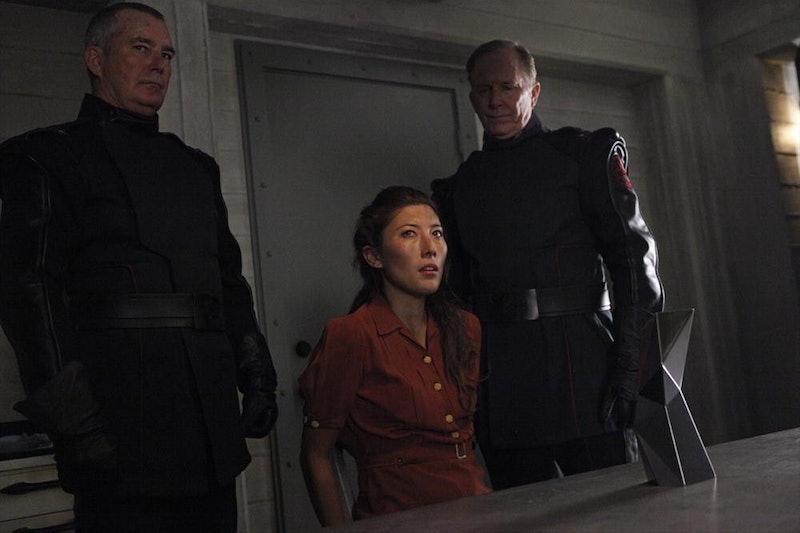 A huge bombshell was dropped during last week's Agents of S.H.I.E.L.D. We finally got to meet Skye's mom, though very briefly. Played by an actress in the Whedon inner circle, Dichen Lachman (Dollhouse), Skye's mom first showed up in the 1940s — and then she showed up again in 1989, apparently without aging at all. Some sort of magic Marvel voodoo is going on there, and baddie Daniel Whitehall was quick to cut her up for his own evil means. By episode's end, it appeared that Skye's mother had been killed, with her body left to be found by Skye's father, The Doctor. It seemed like the beginning and end of Skye's mom. But, was it really? I think we all know that characters in the MCU often die, but just as quickly are brought back to life. Could Skye's mother still be alive today?

First, what do we know about Skye's mom so far? Answer: still not a whole lot. But now at least we know when she first comes into play in the greater S.H.I.E.L.D. story! And that Whitehall harvested all of her organs because she appears to be eternally young. We finally have an answer to a mystery that's been bubbling since the first season, so this is significant, even if it leads to a thousand more questions.

Skye's mom doesn't age in a weird Richard Alpert-type way — similar to how we slowly picked up over the episodes this season that Whitehall wasn't aging. It's not a coincidence, seeing as how it looks like Whitehall killed her in order to gain her youthful glow, by way of taking her internal organs. After the surgery, Whitehall's henchmen dispose of her body outside, where The Doctor stumbles upon her, vowing revenge and rightly so. He cradles her body, weeping into it, but that doesn't necessarily mean she's dead.

Also, with this startling revelation that Skye's mother has been alive since the 1940s and never aged, it kinda makes me think that she's not an Inhuman, like we've all been obsessively speculating about since the very beginning. So, what (/WHO??) is she instead? And seeing as how she managed to stay young for about 50 years, it makes me think that whoever she is, she's got some strange regeneration properties. Considering the fact that Whitehall implanted her organs into his body, and he magically reversed in age, it leads me to believe that Skye's mom can do the same, with or without things like her kidneys, livers, lungs, and whatever else Whitehall took from her.

Along with the fact that it's been highly speculated that Skye's an alien — and maybe not an Inhuman after all, ugh — could her mom's DNA be the reason she survived when she got shot? Coulson and Garrett had a strange reaction to the GH-325. Maybe Skye didn't have a reaction because she's used to that sort of regeneration process, as her mom's been doing that same thing her whole life. The Skye clan doesn't need any sort of T.A.H.I.T.I project, because it's within them to keep on surviving, no matter what happens.

Lachman is still only credited as "Young Woman" for the next episode, "Ye Who Enter Here," so it appears that her backstory will still stay shrouded in mystery for a little bit longer. But if there's one thing we can agree on with S.H.I.E.L.D. so far, it's that they believe in second chances — and with that, reincarnation.

More like this
What’s New On Netflix: Lana Condor’s Ghostly Comedy & A Sexy Reality Series
By Arya Roshanian
Yes, Joseph Quinn Is Actually Playing The Guitar In This Epic 'Stranger Things' Scene
By Alyssa Lapid
Vecna Officially Has A Fan In 'Stranger Things' Star Jamie Campbell Bower
By Alyssa Lapid
Lizzo Proved She’s Team Jeremiah During Her ‘The Summer I Turned Pretty’ Review
By Grace Wehniainen
Get Even More From Bustle — Sign Up For The Newsletter