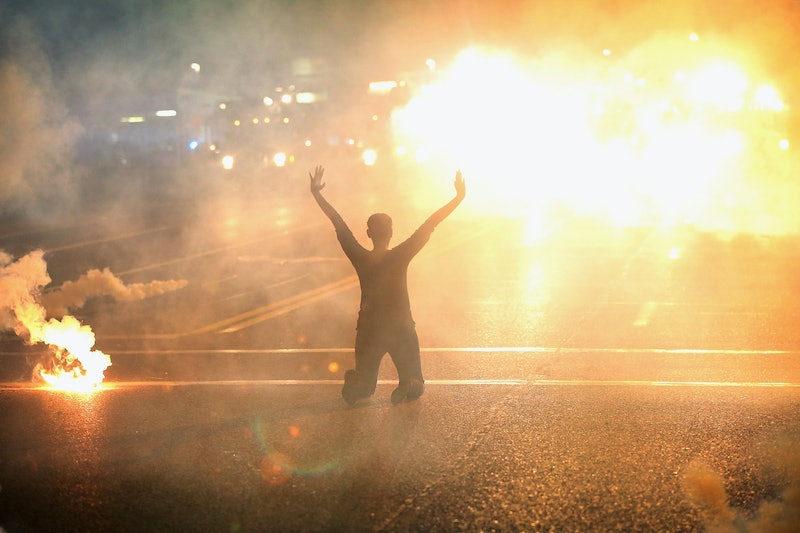 Shortly after 8 p.m. on Monday night in Ferguson, Missouri, Prosecutor Robert McCulloch announced in a press conference that a grand jury would not be indicting Officer Darren Wilson in the August shooting of the unarmed, black teenager Michael Brown. But it wasn't shortly after 8 p.m. that the grand jury had reached that decision. That moment came Monday afternoon, hours before officials in Ferguson decided to publicly announce the decision.

It was hours before McCulloch's press conference that Governor Jay Nixon called for respect following the grand jury's decision. Businesses around the St. Louis County Police Headquarters in Clayton, Missouri closed, anticipating unrest. Around 7 p.m., National Guard soldiers positioned themselves near the site of the most violent protests from August. In the cold, dark Missouri night, eyes from the outside wondered of peaceful protests while Ferguson officials pleaded for restraint.

But officials handling the announcement Monday in Ferguson showed flagrant disrespect for the community by releasing such important news so late on a cold winter's night. As fires sparked and burned throughout Ferguson, the streets became a self-fulfilling prophecy — deny justice, keep protestors cold and make them stay late, and then tell them to go home quietly when failed, yet again, by a system designed to protect all Americans. Ferguson officials might have called for peace, but their actions all but guaranteed that violence in the community would only continue.

Officials in Ferguson treated a community with disrespect and expected to be treated with restraint in return. Only a group that has never known injustice could expect such a reaction.

The timing of the decision was only the first misstep from officials. For over 30 minutes, McCulloch spoke in a tone sparse of emotion while explaining why Wilson would walk free, and the beginning of his press conference sought to blame the media — and social media in particular — for its negative contribution to the situation. “The most significant challenge encountered in this investigation has been the 24-hour news cycle and its insatiable appetite for something, for anything to talk about," he said, "following closely behind with the non-stop rumors on social media."

In reality, in the days and months following Brown's death, social media helped is what helped bring light to mounting tensions between protesters and police in Ferguson. McCulloch's swipe at social media was more than a distraction or a meandering — it was an effort to discredit reporting on the ground, reporting that paints in the powers of Ferguson reacting violently to a community in grief.

As the night grew later, McCulloch's press conference continued to drone on. Detailing the lengthy process of the grand jury's deliberation, McCulloch noted that the jurors "gave up their lives" to work on the case. Of the actual life lost — that of Michael Brown, the 18-year-old boy — McCulloch seemed less concerned, only briefly extending sympathies to his family. (And even after noting that "no young man should ever be killed by a police officer,” McCulloch still insisted on adding, “No police officer should ever be put in that position.") After the press conference concluded, McCulloch noted that the evidence would be available for the public to see. "Basically, it's now a closed investigation," he said, "which makes it an open file." And with that — late at night, just a few days before Thanksgiving — McCulloch, for his part, closed Brown's case.

Watching the scene unfold, I thought of riots, rioters, and the vitriol most often associated with those words. Riots, the action of the crazed, rabid masses, set against peacekeepers, triumphantly protecting the status quo. It's a broken narrative, one that's been broken for a long, long time. For those with the quietest voices, even fires don't burn brightly enough in the November darkness.

Because the criminal justice system took something from the community of Ferguson. They took a young life, but more than that, they took the humanity of a community. Instead of sympathy, they brought tear gas. Instead of transparency, they sprung leaks. Black Americans lost yet another unarmed, young man to an armed police officer, and what they got in return was a November night press conference admonishing their allies and requests that they be peaceful in return.

To those officials who handled the publicizing of the jury's decision, the fires and protests in Ferguson probably are riots — needless violence, crazed destruction, something the system, all-knowing and magnanimous as it is, pleaded against. But it's not needless; it's not crazed. It's anger in the face of oppression; heartbreak in the face of injustice. Officials in Ferguson treated a community with disrespect and expected to be treated with restraint in return. Only a group that has never known injustice could expect such a reaction.