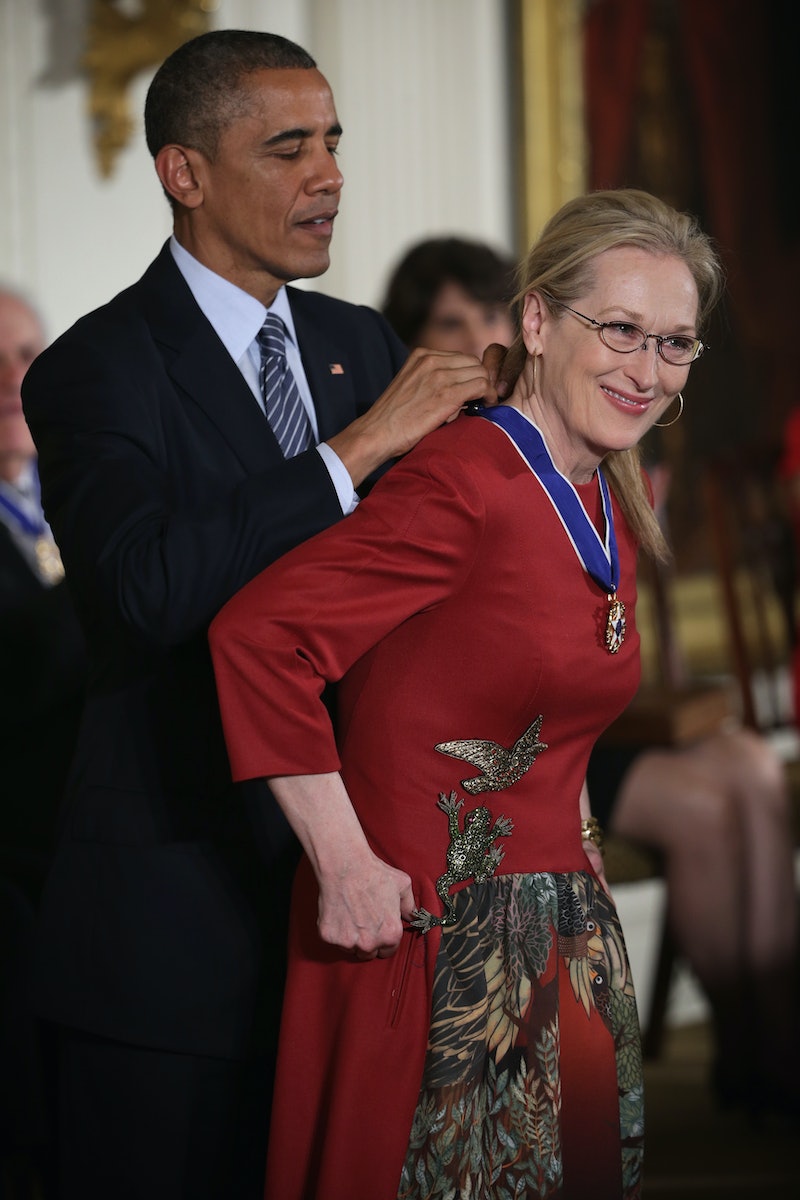 I'm a sucker for The Devil Wears Prada. Then again, it's not that surprising, since it's practically every 20-something journalist's favorite movie. (Or at least it usually ranks in the top 10!) Anyway, I'm not the only one who enjoys a good Meryl Streep flick. This is a trait I share with a very important person: the President of the United States. Yup, Barack Obama "loves" Meryl Streep and shared this fun fact when presenting the 65-year-old actress with the Presidential Medal of Honor over the weekend. When awarding her with the civilian's highest honor, he reportedly told the crowd:

Wow, that quote is pretty fantastic! Don't worry, I don't think Obama is going to run off and have an affair with the Academy Award-winning actress. It's just great news that Barry O. is like the rest of us and appreciates Streep's talent. (This is almost as good as that time he went to Chipotle!) Can't you picture the First Family — Bo and Sunny included — piling on the couch with some popcorn, as they scroll through Netflix to find whichever Meryl movie they haven't watched in awhile? It'd be a tough call, because they probably watch so many.

In the spirit of this exciting news, I've decided to round up a list for Obama's next movie marathon by guessing which are his fave films.

Streep cooked up a classic in this 2009 Nora Ephron movie where she portrays Julia Child. Maybe Obama even whips up some recipes from Child's cook book as a mid-movie snack.

Oh, you thought the presidential family had ordinary movie nights? Nope! Of course they would have sing-a-longs to "Dancing Queen" and ABBA's other greatest hits.

Way more serious than the other movies, but a good one never-the-less. You can't have a Meryl-a-thon without watching "Doubt."

Another serious, but important, moment in Streep's career: Sophie's Choice. The role earned her an Oscar for Best Actress in 1982.

Switching genres, Fantastic Mr. Fox is another great one. Don't let the fact that it's animated fool you! It's equally worthy of a spot on Streep's esteemed résumé.

You can't forget this 1995 film, based on a best-selling novel of the same name. Bridges of Madison County earned Meryl another Best Actress nomination at the '96 Academy Awards.

And last, but certainly not least, Devil Wears Prada. This is fun for the Obama family, because it's quite a contrast from how they treat interns at The White House. Could you imagine if Obama ran the U.S. the same way Miranda Priestly runs Runway magazine? I'd watch that movie immediately!