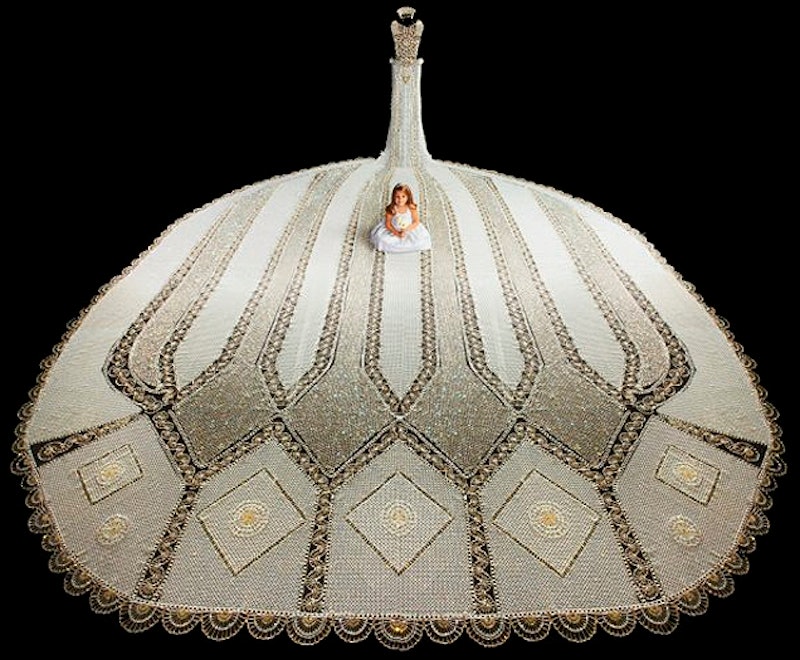 If WE’s hit series Bridezillas has taught us anything, it's that brides can get a bit crazy when it comes to their wedding day — especially when choosing the wedding dress. Well, Minnesota bead artist Gail Be has finally made a garment extravagant enough to satisfy even the most demanding and excessive bridezilla: Introducing the 400-pound wedding dress. Yes, you read that correctly.

The gown has a train 20.5 feet long and is made of almost one million beads, including 400,000 crystals and 500,000 glass pearls. The dress is made of beads and only beads; no fabric was used, making Be’s creation see-through, and, as Jezebel describes it, "like Rihanna's CFDA look on glam-meth." It took Be and a team of 23 assistants almost 20,000 hours over the course of three years to complete the dress, which was made without a pattern or plan. Be simply continued to bead until she couldn’t walk around the train any longer — it had taken up the whole room.

In case you're wondering, yes, it is impossible to walk in. A model who tried on the dress told the Star Tribune, “It hurt, and I couldn’t move, but I felt like a fairy-tale princess.” However, Be isn’t planning on selling the dress, which she has named Fantasy, to a bride at all. She is hoping that her creation will end up on the red carpet or in a Hollywood film.

So keep an eye out for this dress next time you go to the movies, and remember to feel sympathy for the woman who is charged with wearing it — lugging around 400 pounds of beads is no easy task.