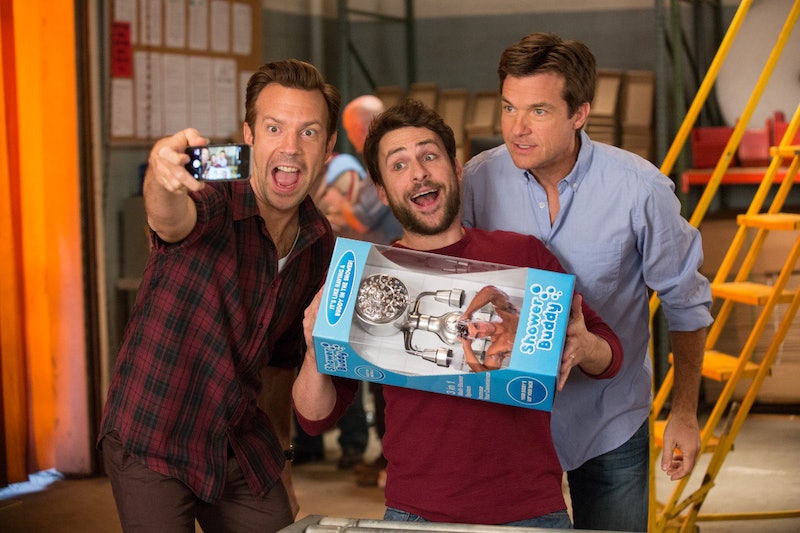 Nobody will be shocked to find a fair share of imbecilic humor in Horrible Bosses 2 . The sequel to the 2011 surprise hit ups the ante on the idiocy of its characters, the silliness of its situations, and on its proclivity for mining the crass for comedy. Granted, writer/director Sean Anders’ entry might supplant the occasional wit of its predecessor (the product of director Seth Gordon and writers Michael Markowitz, Jonathan M. Goldstein, and John Francis Daley) with the flustered yellings of Charlie Day and behind-the-curtain-sight-gags that were tired by the third Austin Powers, but none of it strays too far from the shtick of the original. Among all of these perfectly admissible elements, however, there is something that stands out as a bit too big a regression: one particular instance of not-so-latent homophobia.

The eyebrow-raising episode comes about during yet another example of an old gag played without remorse. Jason Bateman’s character Nick stumbles into a sex addiction support group meeting during a heist operation at Dr. Julia Harris’ (Jennifer Aniston, back in maniacal step from the first go 'round) dental practice, and keeps his cover by insinuating himself as a fellow addict seeking counsel… under the mistaken impression, however, that the group is devoted to the counsel of alcoholism.

As such, in the grand tradition of broad comedy misunderstandings, Nick lays forth a slew of nebulous verbal illustrations of his false struggle that play, “humorously,” as accounts of homosexual experiences. The noun-deficient language he uses to cite the chugging of beers and liquor bottles, for instance, translates to the group members as sexual in nature, eventually leading one of them to call out explicitly his admission of addiction to sex with other men. Here’s where the problem comes in.

Nick is instantly aghast at this accusation, driven to insist against the misconception that he is gay until he realizes it more opportune for his scheme to play along with the ruse. But that brief minute or two in which his character feels instinctively driven to assert his heterosexuality plays like a glimpse into an ideology we all thought was dead.

Knee-deep in fraud and surrounded by strangers, there is no conceivable reason for Nick to feel charged to express his deficiency of homosexual inclinations other than homophobia. But that’s just the thing: Horrible Bosses 2 doesn’t paint Nick to be a bigot in this, or any other, instance. It doesn’t condemn him for his reflex horror at the realization that he's been misconstrued as gay. It doesn’t even feel the need to make explanations or excuses for his behavior. The movie seems to think that this abject aversion to the notion in question is the way anyone would behave. That Nick’s is the go-to, normal response. And there’s something about that that feels pungently retrogressive.

I’d be crazy to suggest that homophobia itself is a thing of the past, but recent years have seen a brilliant shift in American culture’s allegiance in the battle. That aversion that we see in Nick is no longer given the normative treatment, often lampooned or criminalized when it does come to light in a piece of entertainment. Those upholding these proclivities are compartmentalized as agents of a mentality no longer prevalent; outspoken homophobes are set aside as members of a subculture, and one with crumbling esteem beyond its own margins. Yes, the prejudices prevail, but pop culture on the whole seems to have hopped aboard the bandwagon that laments them as irrefutably backwards.

But here we have Horrible Bosses 2 suggesting that any hot-blooded American male would be disgusted to be thought of as gay.

Granted, the movie isn’t malicious, depicting Jason Sudeikis’ Kurt as overwhelmed with glee over the news that his best pal might be gay. But this innocuousness might actually worsen the matter: without a clear villainous intent, it’s harder to identify what Horrible Bosses 2 is doing with this gag as terrifically problematic. No, it isn’t going out of its way to condemn homosexuality, not at all. It’s simply endorsing the idea that being gay is weird, or different, or somehow lesser.

But more than offended did I, when watching the film, feel bewildered. Does this mentality exist anymore at the pop culture summit? Hasn’t the media stepped far enough away from these old fashioned inclinations as to render the lot of them without a place in modern cinema or TV? Can a movie really get away with insinuating that any man, even a smart one like Nick, would be automatically defiant to the notion that he might be homosexual?

Call me naïve, but it all seems even more outdated than that Austin Powers behind-the-curtain gag.