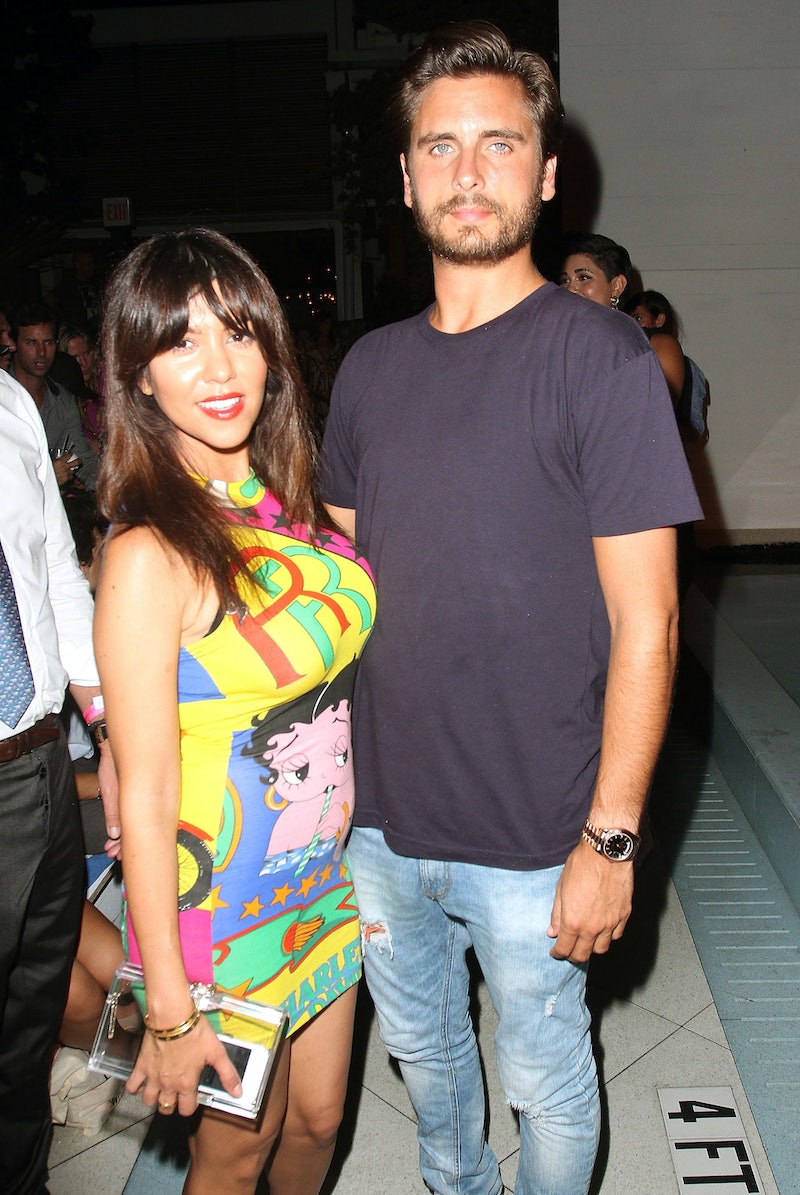 As far as the wide world of reality couples go, Kourtney Kardashian and Scott Disick are far and away my favorite pair. Obviously, this means I'm loving Kourtney and Khloe Take the Hamptons, because it means an extra dose of all things Kourtney and Scott. Unfortunately, though, the season has brought nothing but hard times for poor Scott so far. Grappling with the death of his parents in a place that holds so many memories of them combined with planning for a third baby has proven to be a lot to handle, so it's not surprising that he's depressed and turning to alcohol. That doesn't mean his rough patch isn't seriously affecting his relationship with Kourtney, though. He and Kourt have been at each other's throats all season long. But how much of Kourtney and Scott's drama is real and how much of it is fabricated or exaggerated to serve the plot?

If we let their Instagram accounts be the judge, anyone would assume that all is well between them and always has been. Even during the time the current episodes of KKTH were filmed, Scott's uploads were nothing but complimentary toward Kourtney (and the rest of her family). Not exactly something you'd expect out of someone who's constantly fighting with his girlfriend, right? For example, this post is from the end of June, while the show was still in production:

Yeah, there's definite trouble brewing when your boyfriend starts posting photos of you and him, holding hands, with the word "love" emblazoned across it. And this isn't even counting the paparazzi photos Scott shared, just as an excuse to talk about how cute Kourtney is, or the adorable meme about Scott that Kourtney uploaded around the same time. I'm not blind to the fact that there are celebrities out there who play it cool on social media to keep up appearances, but I don't think that's what's happening here. Of course, Kourtney and Scott probably fight as much as any multi-million dollar parents would, but I don't think it's to the extreme lengths that E! would have us believe.

More proof? Over the summer, the New York Daily News reported that Kourtney and Scott's fights were staged for the show, with a source who claimed to be close to the couple confirming, "Scott's excited to have another baby. Kourtney and him couldn't be better. It's all bull***t." Still not convinced? Multiple other outlets, including Hollywood Life, had similar reports from other sources at the same time.

So that means Kourtney and Scott are going to live happily ever after, right? Not necessarily, but my fingers are crossed, because I'm obsessed with their family. And though I'm definitely not holding my breath on seeing them walk down the aisle anytime soon, a girl can always dream.

More like this
Khloé Kardashian Set The Record Straight On A New Dating Rumor
By Grace Wehniainen
Khloé Kardashian Is Reportedly Dating A Private Equity Investor She Met Through Kim
By Jordyn Tilchen
Winter 'Love Island' Will Be Back In 2023, ITV Bosses Confirm
By Maxine Harrison
Kim Kardashian Reveals The First Text She Sent To Pete Davidson
By Jake Viswanath
Get Even More From Bustle — Sign Up For The Newsletter