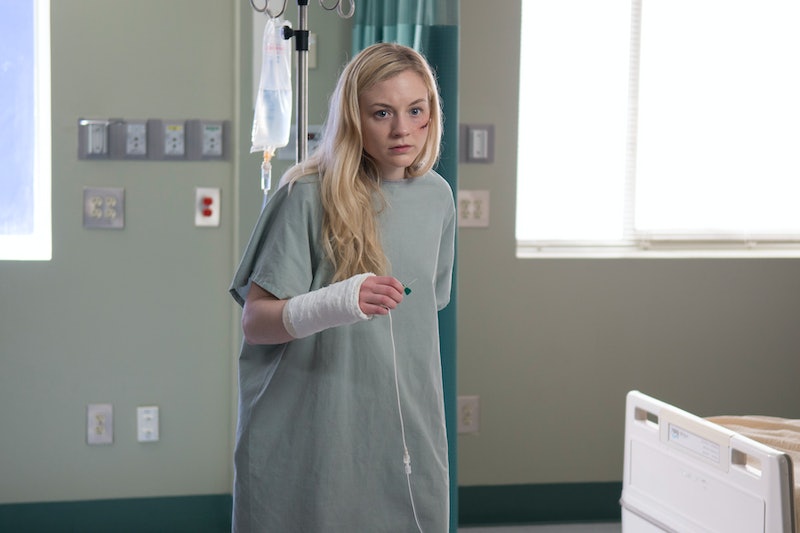 After last season's midseason finale, The Walking Dead fans have something to be worried about. We saw multiple deaths in Season 4, so it begs the question: will Beth die in the midseason finale in Season 5? Of all the people (we care about) who could die in Sunday night's episode, she seems like one of the most likely candidates. Since Rick and Daryl (and crew) are going to roll into the hospital to save her, could she die? We are either going to get an epic reunion or we are going to be emotionally ravaged — or since it's The Walking Dead, we could get both.

Now, I can't stand Beth's pontifications and singing (even though she does have a lovely voice). I just don't know where all this wisdom has come from (I mean her father Hershel was an expert at wise words, but he had the life span to back it up). I am a bit resentful of the fact that Daryl has transitioned from a boy to man in Carol's eyes because of Beth (you mean the death of his brother and the zombie apocalypse hadn't made him a man?), but I'll let my issues for the character slide in this discussion. Just because I don't particularly like her character does not mean I think she should die. But, would it be surprising if she did die? Not really. Here are the ways that Beth could die during "Coda."

She Dies after Killing Dawn

As much as I can be generally lukewarm towards Beth's character, I would love for her to kill Dawn. She's earned that much after getting bitch slapped by Dawn multiple times (and held captive). I would love to see Beth exact revenge and kill that psychotic woman. And in a standard The Walking Dead fashion, they'd have to kill a good guy for a bad guy. Imagine the rush of emtions we'd have after Beth killed Dawn . . . and then got killed herself by like a random walker? Oh, the injustice!

She Dies Making a Choice

The Spoiling Dead Fans on Facebook wrote the following on Nov. 3 about the midseason finale:

"Beth has the choice to leave and has a moment of gumption (or weakness, depending on how you look at it) that leads to her demise. Beth ends up believing that the choice she makes is a necessity in the end. But Beth doesn't envision things ending the way they do."

Obviously, this information is super vague and a month old, but it does make me wonder if it's the truth. Maybe when the hospital gets infiltrated by Rick and Daryl, all hell breaks loose and Beth tries to save someone (maybe she even goes back to save Dawn) and then dies. Don't be a hero, Beth! She's not worth it!

No matter how Beth may go, we know that Daryl will be super emotionally distraught. And maybe that's reason enough she should live.