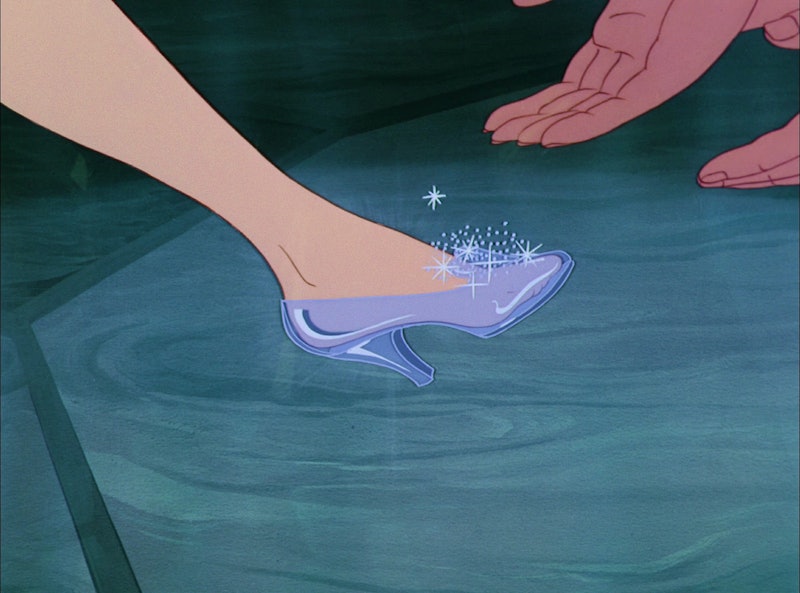 I just want to start this off by saying that I am not here to perpetuate gender roles or the binary system, nor is it my intention to undermine the feminist struggle, as I write on behalf of only a small portion of its entire voice. I only mean to paint a picture that reflects the feelings of the many women I have been raised by, those who I have grown up next to — the same women who, without necessarily meaning to, educated me on my privilege as a cis-male, on how to take responsibility for that privilege and resist the urge to abuse it. I was taught how to respect their voices and bodies and minds; this article is written with that lesson in mind.

Now, for a quick retelling of one of America's favorite fairytales:

If the image above didn't put us all on the same page, I just presented you with a riveting paraphrase of the beloved folk tale Cinderella — itself a loose adaptation of the story of Rhodopis (the first story known to utilize the "persecuted heroine" archetype, as defined by the Aarne-Thompson classification system). Cinderella's plot has seen many a make-over — from "Aschenputtel" by the Brothers Grimm, a pair of sibling writers who capitalized on oral tradition to assimilate many of the fairytales we know today in their first collection Kinder- und Hausmärchen (English: Children's and Household Tales ), to Disney's own live-action, not-so-white-washed remake back in 1997, starring Brandy and the late great Whitney Houston. But there's one element that has remained completely intact throughout its metamorphic history: the shoes. Even after the magic fades, and everything seems hopeless, Cinderella still has her pretty shoes to help her become what she's always wanted to be.

Now, of course, most of us are acutely aware that Disney princesses sometimes don't make the best role models, but that's not the point that I'm trying to make here. I felt the urge to write this after seeing (and having a heartfelt conversation with) my soon-to-be godmother at the birthday party of a family member last weekend. We talked about how it takes some longer than they would have hoped to become comfortable in their own skin, but that when they finally do, the world becomes their playground. We eventually got onto the topic of "weight" and how she had trouble coming to terms with her size for a long time, but she went on to say:

"When I was heavier and my self-esteem was at an all-time low, I would walk by the stores and look at the pretty displays and realize that nothing would fit me or look good on me. Out of desperation, I would have to shop at plus-size stores, where the clothes were tent-like and the fabrics and prints were horrendous."

After hearing those words come out of her mouth, I immediately went into retrospection. I thought of my mother, of my aunts, of my female cousins, and of all the times that I had actually observed their (omnipresent) struggle with size. I thought of all the times I went shopping for clothes with them, and how I never understood why the styles they shopped through looked so much different than all the others I saw around the stores, and why there was so much less to choose from. I thought of how, even as we perused its wares for hours at a time (my mom was, and still is, a shopaholic), the term "plus-size" didn't escape from anyone's mouths. I thought of all their weights fluctuating throughout the years — much like the story of Cinderella — and how no matter how big or small they felt, no matter how many times they used their gym membership that month, or ate one too many Oreo cookies, there were always, without a single doubt, shoes. Handbags. Accessories. All aspects of the fashion world that weren't intrinsically bound to the size of the wearer. My future godmother continued:

"But always, I always had a love for shoes and handbags that never changed even if my size did. Walking by a shoe store, I walked in and my heart skipped a beat. I picked out a pair of bling-y pumps and slipped those babies on and they fit like a glove... It was like they had super powers. They made me feel great; they expressed my personality — not like those tent-like clothes that did nothing for me."

And she had a point. Even in the story of Cinderella, a persecuted heroine whose identity is throughout the plot quite literally defined by her apparel — assuming the role of "the help" when she had her dirty rags on, then feigning royalty when she had her gown — the glass slippers are her saving grace. They prove to everyone that she was the beautiful girl from the Royal Ball who had danced with the prince; they prove to everyone, and most importantly, herself, that she is a girl who is fit (pun intended) to be a princess. The environment in which she grew up, what society told her she was — more specifically, what her step-family deceived her into believing she was, all of the personal struggle she had to overcome... This is all washed away with a single pair of shoes made of glass. And her truest self becomes reflected off that glass, finally able to break free of the entrapment of societal standards.

"They gave me confidence... When I walked in a room, I felt like a million dollars... same for my handbags. Doesn't matter what size you are when you have a great handbag and shoes, even accessories — they reflect your personality not your size."

The last of what she said really hit the nail on the head for me. That, no matter her size and regardless of what anyone said about it, she could always find solace in accessorizing; that, even in the slightest way, the fashion industry gave everyone who couldn't yet find comfort with their physical bodies a sort of escape route, a way out of the labyrinth of unrealistic beauty ideals (which fashion continues to govern but that we ourselves create and perpetuate), a way to hold on to their spiritual bodies through style.

Coming back to my initial disclaimer, there are a few ways you can look at this situation: you can write the entire tale off as anti-feminist for not passing the Bechdel test, and complain about how Disney is at the forefront of male chauvinist tyranny, or you can observe "feminism" as an all-inclusive term — that all female voices deserve to be heard; that this is one female protagonist's story being told; that she is getting what she wants; and that wanting to be a princess, wanting to break free of the socioeconomic rules and regulations that society forces you to adhere to, isn't anti-feminist. One thing that this fairytale teaches us, if nothing else, is how to reclaim a money-driven, chauvinistic system full of socially backwards beauty standards — how to exploit its weaknesses so that you come out ahead of it, with more confidence, more self-awareness, and pretty shoes, to boot. So thank you, Cinderella and my [very own fairy] godmother, for helping me realize that.