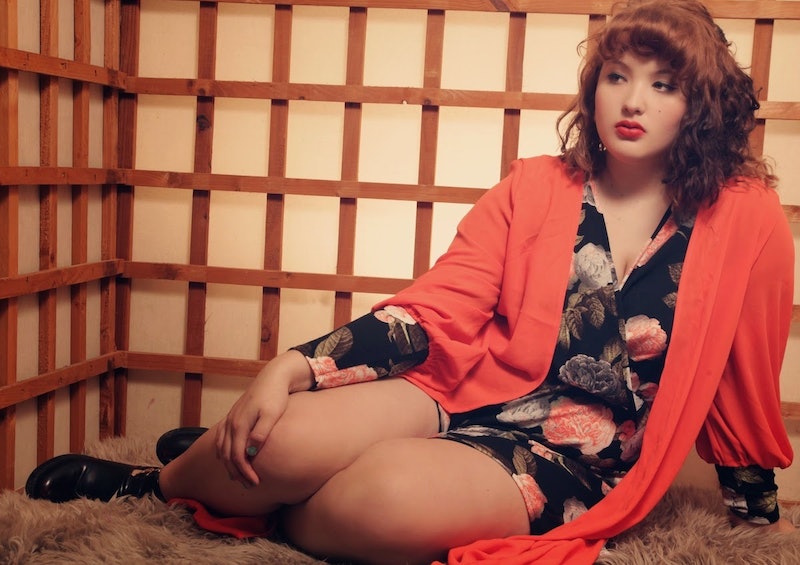 Since picking up my copy of Lena Dunham's Not That Kind of Girl , I've been thinking (a lot more than usual) about constructs of beauty, of femininity, of weight and body and womanhood. And I've been toying around with ideas of expectation — of the things expected of girls and women for being girls and women.

I'm often referring to plus-size fashion rules as being one particular category of pre-conceived expectations that I feel passionately about trumping. If you tell me not to wear something because of something as stupid as my size, I'll probably wear it... and take loads of pictures doing so. But there are so many other notions tied in to being a larger woman — so many norms and regulations that seem to be born out of a terrifying and seemingly dystopian-esque desire for absolute homogeneity. And they are notions people don't seem to be shy about expressing and supporting when they see a fat woman not ashamed of being fat.

One of my favorite parts of Not That Kind of Girl (and there were just so many), was Dunham's use of lists. They often came in at just the right moments to break up the intensity or emotional whirlwind that were so many of her essays. Within these lists was "13 Things I've Learned Are Not Okay to Say to Friends," and it included things like, "It's all right. Honesty has never really been your thing." Or, "But it's different because I actually have a dad." Whilst I'm sure I've probably said similarly horrifying things to my friends and relatives in times of far too many Jager Bombs or temporary-but-no-less embarrassing brain farts, Dunham's list also got me thinking about things people have said to me. Things that left me shocked, awed, disgusted, in tears or ready to break out the right hook (something I haven't actually done since the second grade — and she totally deserved it).

Being a woman seems to give people a free-pass to be complete nob heads. It's all good and well to talk about how far we've come, but like Dunham writes, "As hard as we have worked and as far as we have come, there are still so many forces conspiring to tell women that our concerns are petty, our opinions aren't needed, that we lack the gravitas necessary for our stories to matter."

I went to a ROOKIE event this week and even as I was wowed by hearing Tavi Gevinson and Janet Mock in conversation, I was almost brought to tears by the knowledge and realization that so many people would probably still look at Gevinson and think, "What a cute little thing. She thinks she's so grown-up and important." Because people still feel they have a right to consider women (and especially, I think, young women), silly little things with silly little opinions and silly little actions. When we dare to have opinions that are controversial in some way — that are not "mainstream" in some way — we set ourselves up for critique. And these days, the critiques extend far beyond friends and relatives. They now encompass the world wide web and the delightful creatures known as Internet trolls.

Being a proponent of size acceptance, of the right to wear fashionable, sexy or quirky clothes as a fat woman, of health at every size, of body confidence, I find that criticisms and verbal bullying are never far behind. Sometimes people don't realize they're being horrid. Their comments are innocent, albeit that doesn't tend to help much. Other times, they're malicious. And because I'm a lot better at forgiving than forgetting, I tend to remember them all.

1. "You Could Lose So Much Weight If You Didn't Spend So Much Time Writing."

Silly me. I should have known that prioritizing being thin over following my life-long dream should have been the obvious way to go.

2. "You do realize that that crop top will show your stomach, right?"

Nope. No, I hadn't realized.

3. "You're so brave to wear those short shorts."

Wearing anything revealing when you're over a certain size, or imperfect in the sense of having cellulite and stretch marks on your body, is still considered a sign of bravery. And there's something really wrong with that when you think about it.

Again, because being so daring and bold as to show your body off when it's not skinny is such a horrid undertaking.

5. "The reality is that you won't excel professionally unless you lose the weight."

I know so many men and women alike who see the beauty in the larger form. Whenever I hear the above statement, part of me wants to show everyone a photo of all the beautiful couples I know where one or both parties are fat. Or maybe a photo of my own partner, who loves all my wobbly bits. I've come to realize that no matter what you say to these people, though, they won't ever understand because their minds have been so infected with judgments and stigmas. All you can do is continue to be happy in your body, and/or continue to enjoy the fat body that actually is next to you in bed!

7. "Don't you ever think about your health down the line?"

Actually, I probably think about my health way more than a lot of people — because I am both fat and educated. I'm not naive to the added risks of being "obese," but I'm definitely aware of how to make sure I stay fit and healthy regardless of size.

This was said by a friend who didn't realize I was in that "over 200" category. When I confronted her, she said, "Well, you don't count because you're tall." We are no longer friends. This was only one of the many ignorant things she said throughout our relationship.

9. "Your blood pressure and cholesterol are perfect. Is that unusual for you?"

This coming from a certified and practicing nurse. In fact, it is not remotely unusual for me, ma'am.

12. "You take such good care of your face. Why not do the same for your body?"

The ways in which a person takes care of their face or body just aren't anyone else's concern other than that person's (speaking of which, can we please lay off Renee Zellweger now?).

I do like a lot of fruit as a matter of fact (not so much vegetables). I just don't appreciate having it shoved down my throat because of faux-concern.

14. "Doesn't it bother you that you can't share clothes with your boyfriend?"

Nah. Although sometimes we like to play dress-up and I stretch out his shirts. It's cute.

I don't doubt that this one is true in some cases. But in those cases, I wouldn't want to wear their bigot-spired clothes anyway.

16. "Any fat person who says they're happy with their body is a liar."

Far too many people genuinely seem to believe this one. I cannot express just how ridiculous it is, but it stems from this idea that "fat" is such a horrible thing that anyone with a bit more flesh on their bodies must desperately want to change themselves.

17. "I don't really think your size acceptance stuff is healthy for teen girls."

I'd like to think that trying to instill self-love and acceptance in younger women is far more valuable than the prototypical reading material of "10 ways to get your perfect beach body this summer," or "How to get the body you need to have a killer college experience." Yes, the latter is a real headline I came across when I was 16. Pretty sure it made me cry, and not in a warm, fuzzy kind of way.