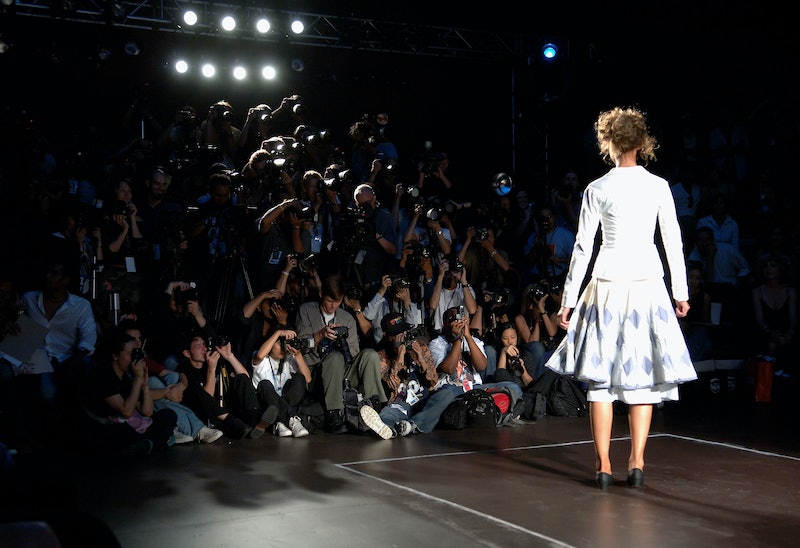 "I write about clothes."

File these under Things I Don't Say to Dumb Bros, along with "Aw, finance jobs can be sexy, too" and "I really like your polo shirt." I tell people that I write for Bustle all the time, but sometimes I find myself omitting the fact that I write for our fashion and beauty section, because I suspect people will find the idea, well, a little girly. A little vapid. You know, a little "8 Modern Ways to Wear a Hair Scarf" (which I totally wrote, and it is sort of fluffy, but even Tolstoy had his less notable moments — didn't he write a list for BuzzFeed called "10 Sudden Revelations About the Absurdity of Existence"?).

Let's not beat around the well-heeled bush: a lot of people think fashion is straight-up shallow. Congress doesn't really recognize fashion as an art form; rarely is clothing a life or death matter; as a concept, fashion is literally superficial — it exists only on the surface. (If someone's implanting stylish textiles beneath their skin, I don't want to hear about it.) A writer who dissects Jonathan Franzen's latest rant is going to be thought of more highly than a writer who muses over Alexander McQueen — who I've always thought of, morbidly, as the David Foster Wallace of the fashion world. But I digress.

Sure, there's nothing very exciting about skinny jeans, t-shirts, and little black dresses, other than the fact that any ubiquitous article of clothing can be used as a lens through which to view the desires and insecurities of that generation — but whatever, right? It's just fabric. And yeah, wandering through H&M is the polar opposite of reading a great novel: instead of feeling inspired, transformed, I get a raging headache and an urge to spend my paycheck on cheap plastic baubles that have no discernible purpose and yet they are sparkling by the cash register so I must have them all! Plenty of ready-to-wear fashion is either incredibly utilitarian or unapologetically one-dimensional, neither of which provide much room for intellectualizing. Cold? Have a sweater. Bachelorette party? Sparkly cocktail dress. Ain't much to analyze there.

But the clothing that we basic bitches wear has all trickled down from somewhere, and if you do a little digging, you'll see that the fount from which fashion flows is intricately linked to social and economic issues (the moral significance of hemlines, the changing silhouette of the body, the price of cotton), and is a product both of art world dialogue and artistic imagination at the highest level. Here's where we praise Coco Chanel and her dresses that liberated the female form once and for all. Here's where we bring up Alexander McQueen again, whose shocking runway shows were as atmospheric as a Hitchcock film, as disconcerting as a Pynchon novel, and entirely his own statement — his posthumous show at the Met only solidified his place in the history books as a legitimate artist.

We're currently in the middle of Fashion Month, and the manic attention to detail in these runway shows gives us a chance to hear the high-concept backstory behind seemingly petty details like hairdos, manicure texture, and lipstick hue. Ask the designers and makeup artists what they're working toward, and you'll hear about peeling French paintings, obscure art films, and tantalizingly intangible concepts (the hairstylist at Jason Wu wanted the models' locks to "look expensive"); the process of a runway show is a magical transformation that we might think of as the (designer's) word made flesh. It's always exciting when the conceptual meets the 3D; during Fashion Month, the designer's dream materializes on the runway and then gets shipped to stores where you, the romantic in the back row, can touch the fabric, can slip it over your head, can embody this distant echo of the original fantasy on your own skin.

I've said it before and I'll say it again: what's cool about fashion is it is the most immediate, tangible art form we've got today. It's massively profitable, it's always hiring, it's wearable, it's aspirational, it's in the Met, it's on the street corner. In an era where few are reading literary novels and symphonies are closing up shop, we've got to cling to the popular art forms we have left if we want to remain a society that values beauty, innovation, and storytelling. To dismiss fashion as shallow — or worse, as some sort of girls only, drink mimosas and talk about menstruation club — isn't a daring, elitist move by the cream of the intelligentsia. It's arrogant ignorance. Kudos on finishing all six volumes Remembrance of Things Past, but don't forget that there are artists working around you who are simultaneously defying gravity with fabric, reinventing the wheel (or the LBD), creating significant artistic statements, trying to make cleavage high-concept — and selling it all.