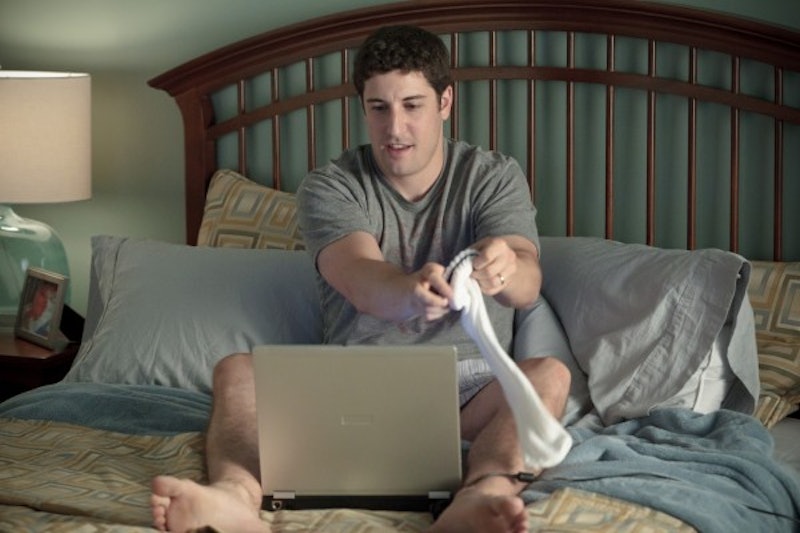 In case you haven’t noticed, human beings are gross. As much as we like to pretend we’re perfectly clean and sterile little flowers that always smell good and always behave appropriately, we are not. Couples are gross in their relationships, women are totally disgusting in the stuff we do when we’re alone, and yes, dudes, too, are pretty nauseating when they’re left to their own devices.

While, based on my own alone behavior, I’ve always assumed women take the cake on disgustingness, crowdsourcing the men in my life made me realize we’re actually pretty tame in our behavior. We may like to sniff our crotches every time we pee, or admire the lovely swirling of our period blood in the toilet, but at least we know when to change our sheets and would never, ever think of sending one of our friends a photo of our poop. (Or would we?)

We asked some guys what gross behavior they're guilty of when they're alone, and, I gotta say, even I found myself gagging a bit. In case you're still in the dark on this topic, here are 25 totally vile things men do when they think no one is looking.

Like, literally getting their fingers in there for a deep, long scratch.

...THEN SMELLING THEIR FINGERS BEFORE WASHING THEM

I can’t totally blame them for this one. If there’s something gross near me, I’ll smell it out of curiosity, too.

RELISHING THE SMELL OF THEIR OWN FARTS

This doesn’t mean just acknowledging the smell of a fart, but really putting their face in the space where they just let one rip, and examining the smell. Bean burrito, anyone?

AND MAKING THEIR GUY FRIENDS SMELL THEM TOO

I guess it's how men bond when there's nothing else to say.

...THEN RATING THEM ON A SCALE FROM A ONE TO TEN

It’s like the Olympics of farts all day, everyday!

Apparently, shit-stained underwear is just a part of life for the male gender.

LOOKING AT THEIR POOP IN THE TOILET

Which, I can kind of understand, because ladies do this one, too.

TAKING A PHOTO OF THAT POOP FOR THEIR FRIENDS

Which I just can’t understand at all.

You’d think going commando would be a better idea considering the skid mark factor, but I digress.

TIMING HOW FAST IT TAKES THEM TO PEE

Because the Olympics of farts isn’t enough.

It’s like a water, er, pee gun that doesn’t quit.

Who knew dudes were that flexible?

BLOWING THEIR NOSE IN THE SHOWER

Which means there is no toilet paper involved — just a bare hand and water. Here's hoping they reach for the soap immediately afterward.

PICKING THEIR NOSE AND EXAMINING THE CONTENTS

You know, like a five-year-old would before they eat it.

DOING THE SAME WITH EARWAX

What? They don’t own Q-Tips?

I do the same thing with my boobs, so it’s cool.

WASHING THEIR SHEETS MAYBE ONCE A MONTH

WEARING THEIR SWEAT GYM CLOTHES MORE THAN ONCE

Because they didn’t sweat that much.

PEEING IN THE SHOWER

WASHING THEIR HAIR WITH A BAR OF SOAP

That is, if they wash it all, because who the hell wants to wash their hair?

LEAVING BEHIND TISSUES THEY'VE USED TO WIPE AWAY POPPED PIMPLES

Someone needs a girlfriend.

Jesus, let's hope they at least wash those.

From your lipstick to your facial moisturizer, if there’s no lube on tap, guys will reach for the next best thing, and sometimes that next best thing is your favorite Chanel beauty product.