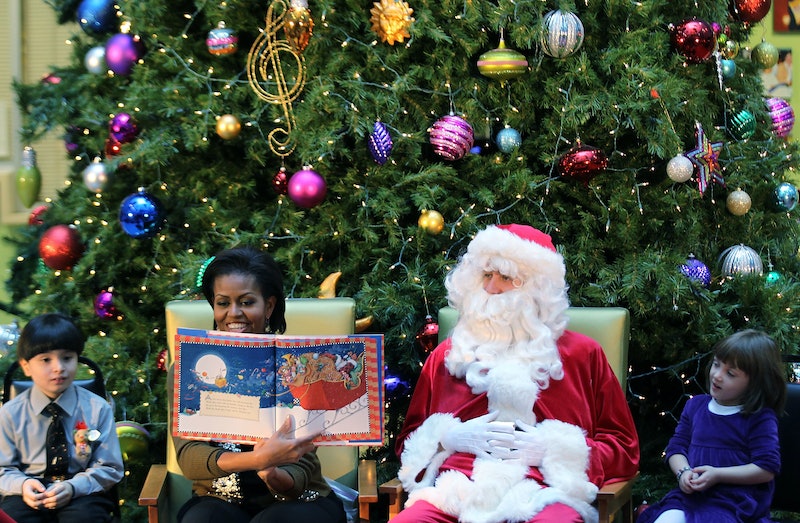 Oh, hey, holiday season, what's up? Weren't you just here like, a few weeks ago? No? It's been a whole year already? Well, I'll be boiled in my own pudding.

Some years, it seems like Christmas can't come soon enough. There's so much to look forward to — twinkling lights brightening up the drab winter landscape; spending time with family and friends; the heady rush of completely blowing out your gift budget because this present is perfect and Aunt So-and-So's going to love it; the ecstasy and subsequent agony of hearing your favorite Christmas carols, then getting completely sick of them; the anticipation of stuffing your face with all manner of delicious once-a-year food.

This, however, is not one of those years. Maybe it's the fact that my life has been so consumed by graduate school that my idea of a Christmas miracle is getting all my work done by the last day of the semester. Maybe it's that, by and large, this has not been one of humanity's better years, and I kind of just want to get to January 1 so we can hit the reset button and try to be a little less awful. Maybe it's the fact that time has sped up to the point where it feels like last Christmas was only 12 weeks ago, not 12 months ago.

I'm not the only one who feels this way. Most people I've talked to recently are equally flummoxed and fatigued by the idea of Christmas being less than a month away. Sure, we could skip it, and just hibernate from December 24 to January 1, but our families and good American capitalism would never allow it. Whether we like it or not, the holiday season roller coaster is hitting full throttle, so if, like me, you need an injection of holiday spirit, check out these books:

A Christmas Carol by Charles Dickens

Of course you can watch one of the 800 film versions featuring everything from Muppets to Mickey Mouse, but why not make the time this year to go back to the original, and read Dickens' classic tale of holiday revelations and redemption? The text is available free online, so you can read while hunting for gifts on Amazon and Etsy.

"The Gift of the Magi" by O. Henry

As much about the benefits of open communication in relationships as it is about the virtues of unselfishness, sacrifice and love, O. Henry's 1905 short story is a simple tale about how caring about people, and having people who care about you is the greatest gift of all.

A Child's Christmas in Wales by Dylan Thomas

Most of us have a tendency to romanticize the holidays of our youth, and Welsh poet Dylan Thomas was no exception. In Thomas' distinctive lyrical, neo-Romantic style, he recounts rose-tinted memories of Christmas Eve high spirits and hijinks.

The Stupidest Angel by Christopher Moore

Perhaps murdered Santa Clauses and brain-eating zombies get you in the holiday spirit more than nostalgia and heartwarming moral lessons. Fair enough. That's why writers like Moore exist, to satisfy our twisted cravings for holiday tales of traumatized kids and angel's missions gone astray.

Holidays on Ice by David Sedaris

Essayist David Sedaris tackles the idiosyncrasies and absurdities of several holidays in the re-issued version of his 1997 bestseller, but its the stories about Christmas, including his stint as a Macy's elf and his thoughts on children's Christmas pageants, that will make you glad for ice of another kind — in the form of ice cubes in your spiked eggnog.

Little Women by Louisa May Alcott

Sure, this classic novel expands way beyond the holiday season, but its opening chapters, showing the four March sisters and their mother celebrating Christmas despite poverty and the ongoing Civil War, is a reminder that the true spirit of the holiday is not how much you spend, but who you're spending the holiday with.

Little House on the Prairie series by Laura Ingalls Wilder

From the Big Woods of Wisconsin to the prairies of South Dakota, the Ingalls family always knew how to celebrate Christmas. Pick up any of the Little House books for descriptions of old-fashioned pioneer Christmases, as well as some of the most mouth-watering food you can imagine.

How the Grinch Stole Christmas by Dr. Seuss

Feeling grinchy? This clever, catchy 1967 classic should help with that.

In God We Trust, All Others Pay Cash by Jean Shepherd

Take a break from watching A Christmas Story (don't worry, it will start over again in two hours) and read through the novel that inspired it. Like Sedaris, humorist Jean Shepherd drew on his own experiences to write this Christmas tale, although its one with a less cynical bent.

The Life and Adventures of Santa Claus by L. Frank Baum

Best known for The Wizard of Oz, L. Frank Baum applies his whimsical style to the legend of Santa Claus. Starting with Claus' (as he is known in the story) infancy, Baum gives us his take on how many Western Christmas traditions started, including why Santa must deliver toys by night and how the reindeer came into service, sprinkled with fairies and wood nymphs and characters with names like Ak, Weekum, and Awgwas.

Maybe the prospect of dealing with family, spending money, or gorging yourself on tons of food and drink has you feeling less than enthusiastic about the impending holiday, but with any luck, you won't have to deal with murder, like the family in Agatha Christie's 1938 detective novel. Not much time for binge-watching Christmas movies and eating cookies while solving a whodunit.

The Ecco Book of Christmas Stories edited by Alberto Manguel

Why have just one Christmas story when you can have 23? This collection of holiday-themed short stories features acclaimed writers like Truman Capote, Alice Munro, John Cheever whose contributions range from heart-wrenching to heart-warming.

'Twas the Night Before Christmas by Clement C. Moore

If this classic Christmas poem doesn't get you in the holly jolly spirit, nothing will.