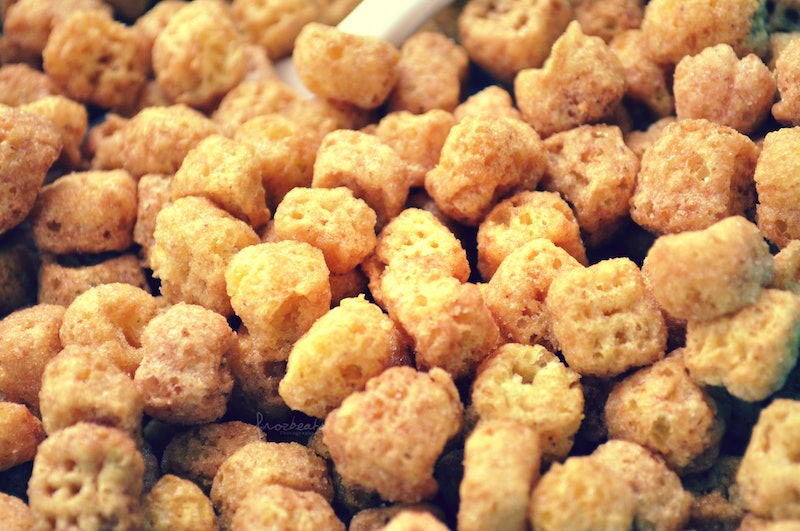 I'm not trying to be a '90s snack-food truther here or anything, but guys: Everything you thought you knew about which '90s snack foods are still in production is wrong. The Internet is positively lousy with fun, nostalgic, and completely incorrect listicles about '90s snack foods we wish they'd bring back, snack foods that were gone too soon, and the snack foods you'll never eat again, and until now, we've been taking them seriously, like a bunch of FOOLS. I understand that it's confusing — the '90s were so long ago, and these foods seem so bizarrely dated, it feels like there's no way they could still exist. And yet, exist they do. Let's not bury the Dunkaroo kangaroo before he's actually dead, eh, friends? After all he's given us, we at least owe him that much.

These 11 snacks are suitable to satisfy your sweet tooth while doing any of the following activities: starting a fight club, wearing platform sneakers, winning a dance contest at a '50s-themed diner, performing an inventory on your butterfly barrette collection, or climbing through your best friend's window instead of using the front door like a normal goddamned person. Hell, do all those things at once. You're an adult now! You can do anything you want, including get a butterfly tattoo on your lower back, or mainline sugar until you keel over, just like the good Lord intended.

Now, if only someone would realize what a dire issue of national importance bringing back Butterfinger BBs is...

A recent change in flavors may be why some people think Teddy Grahams were discontinued...or it might just be that, after you've grown out of eating tiny graham-cracker bears, you kind of put the whole thing out of your mind. I mean, when was the last time you even ate a graham cracker that wasn't just a transportation mechanism for a marshmallow and some chocolate? But contrary to what many of us think, Teddy Grahams are still alive and kickin', both online and at your local grocery store.

9. FRUIT BY THE FOOT

These gummy candies suffered a similar fate in our collective memory as Teddy Grahams — they seem so deeply entrenched in our childhoods, how could they still exist? Plus, kids today have iPads — do they really need to entertain themselves with gross jelly candies that are filled with goo? The answer, it turns out, is a resounding YES. You can buy Gushers, Fruit by the Foot, and Shark Bites online and in supermarkets. Shark Bites even now offers a gluten-free version, so kids with allergies won't be deprived of the experience of finding out that these candies are really not as cool as the commercial led you to believe.

Classic '90s "like Mountain Dew, but somehow actually a little worse?"-drink Surge was brought back into production with much fanfare earlier this year. You're probably already hoarding a case in your basement, to prepare for the day we once again come to our senses and banish this drink to the realm of wind and ghosts, where it belongs. But until that day, you can buy Surge online. I also highly suggest you watch the commercial above, which describes the drink as containing "carbos." If you are a science student and can explain what carbos are and why we would want to consume them, please write to me, care of this publication.

More than any of the other snacks on this list, reports of the Dunkaroos' death have been greatly exaggerated. Even Betty Crocker, a subsidiary of Dunkaroos manufacturers General Mills, thinks these cookies have gone the way of the dodo. But the snack is still alive and kickin' (and, presumably, dunkin') in Canada, where Dunkaroos are still manufactured. Fans who have no plans to take a cookie-hunting vacation to the Great White North can still buy new Dunkaroos on Amazon. But seriously, can you believe that our parents just let us eat frosting straight out of the container? Was it because the economy was so good, or they were all distracted by the Monica Lewinsky thing, or what?

Despite some popular articles that claim that Rice Krispie Treat cereal is a food you can "never eat again," anyone with $3 in their pocket and the time to hit up Walmart can eat this sticky dessert-cum-breakfast food, possibly while watching an episode of Pepper Ann. Ahhhh, it's like the last 20 years never happened! Right? Right? Please tell me I'm right.

And now, we enter some conspiracy-theory territory. Sprite Remix was genuinely discontinued in the U.S. in 2005, yet according to the Key Foods website, you can pick up a bottle for $1.29 in the store's North Woodmere, New York outpost. Could this be a webpage not updated since 2005? Unlikely — grocery stores didn't have that kind of e-commerce setup in 2005. Is this some deadstock that they happen to have in this one town's warehouse? Oh, my God, the website says you can also get Doritos 3-D there. Are we dealing with a glitch in the matrix here? Or should we all begin a new life in North Woodmere, where '90s snacks still flow freely and we are forever young and shall never know pain? We'll have to wait and see, kids. We'll have to wait and see.

Frankly, I don't even know what the hell this is. I couldn't be sad about never eating it again, because I don't remember it even existing the first time around. The commercial kind of faintly jogged my memory, but in that way where you can't remember if you actually have a real memory of it, or just read a really convincing Tumblr post about it. But anyway, the cereal was put back into production in 2013 and you can buy it online, if that is something that you'd like to do!

While General Mills themselves coyly hinted that this cereal had only been discontinued in the U.S., they never quite confirmed where we could still find this snack food made of weird tiny bread slices, and many assumed the product was dead. It turns out that, once again, the answer lies with our neighbors to the North — French Toast Crunch is still in production in Canada, and the rest of us can buy it on Amazon. Cobie Smulders, universal health care, and discontinued cereals — what miracles can't you create, Canada? But folks who don't feel like handing their dough over to Amazon will be able to buy the cereal at their own grocery store in the U.S. again, too, staring mid-January 2015.

If you've been searching for these since they were discontinued in 2004, it's your funeral, pal — you can buy them online now (they're still produced in Europe), and you can get them in brick-and-mortar stores throughout the U.S. when the candy will be reintroduced to our shores in January 2015.

More like this
12 Nostalgic ’90s Beauty Products That Bring Back All The Feels
By Tyler Atwood and Paris Giles
Netflix Reveals First Look At Wednesday In The 'Addams Family' Spinoff Series
By Bustle Editors
She Founded American Girl To “Bring History Alive.” Then She Made Over A Town.
By Amanda FitzSimons
Drew Barrymore & Justin Long’s Reunion On Her Talk Show Had Her In Tears
By Radhika Menon
Get Even More From Bustle — Sign Up For The Newsletter