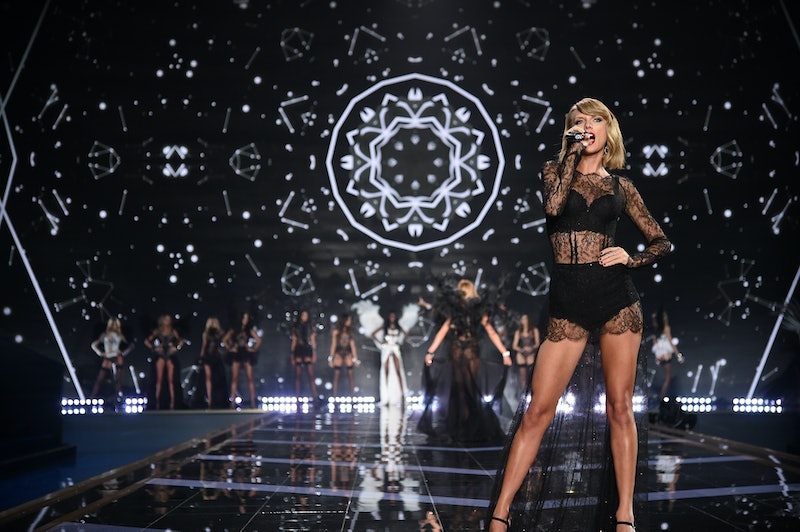 The Victoria’s Secret Fashion Show turned out to be a pretty big night in the music world. Yep, Ariana Grande got hit by an angel wing, which led to the greatest photo of the year. Taylor Swift also had a pretty big night. The pop star owned the runway in a black lace cover up and, of course, rocked out with BFF Karlie Kloss the entire time.

Victoria’s Secret must have a soft spot for T. Swift. I mean, they did invite her to perform at the show two years in a row. There’s also some behind-the-scenes photos of her hanging out with all of the angels before they hit the runway. Seems like she fits in with the group pretty well, but that shouldn’t be a surprise. Because, really, who couldn’t love her?

So, why hasn’t Victoria’s Secret promoted her as one of their models? If they’re going to bring her back next year, they might as well let her become an official angel. Here are seven completely logical reasons why Taylor Swift deserves to be a full-time Victoria’s Secret Angel in the 2015 show.

Only problem? Good luck getting T. Swift to show her belly button.

This one’s a no brainer. Taylor and the VS Angel became instant best friends after last year’s show. I mean, they even went on the coolest road trip together. It’s pretty important to get along with your co-workers, so why wouldn’t Karlie want an office (and by office, I mean runway) buddy?

Guys, when is T. Swift NOT wearing something shiny and sparkly? I mean, this is the girl who had a guitar that was covered in glitter. She’s no amateur here. And, let’s face it—the VS Fashion Show is filled with plenty of bling. She’s the perfect candidate for a set of shiny wings.

She’s a pretty big deal is the music world, but T. Swift is also one of the nicest people on this planet. Remember when she gave a girl $90 to spend at Chipotle or sent a grieving fan a care package? Yep, she’s the pop star version of Mother Theresa. All she needs is a pair of wings to seal the deal.

4. There's A Fairytale Theme Going On

Remember her hit “Today Was a Fairytale” from back in the day? Oh, and remember when last year’s show was filled with fairy wings? Coincidence? NOPE, just a sign.

So, she may look vertically challenge when standing next to Karlie Kloss (who doesn’t?!) but she’s still 5’10’’. Hey, that’s pretty tall, so she might as well join the VS Angels.

6. She Knows How To Pose

Taylor’s been on the cover of quite a few magazines nowadays. From her stunning TIME cover to when she dropped a big confession about her belly button in Lucky, she hasn’t been shy in front on the camera. Looks like someone’s been practicing her modeling skills.

7. She’s Not Afraid To Dance

Let’s face it: The VS Fashion Show is pretty much just a giant party. I mean, the angels literally dance with T. Swift while she’s performing. And, Taylor’s never been shy to bust a move—just look in the audience of any award’s show for evidence. Yep, she’s in.

More like this
Taylor Swift Wants To Direct A Movie Next — But You Might Have To Wait
By Radhika Menon
Tilda Swinton’s Neon Yellow Hair Is More Than A Style Statement
By Justine Knight
Everything To Know About Taylor Swift’s 10th Studio Album, 'Midnights'
By Grace Wehniainen and Jake Viswanath
These Are The Best Socks A Woman Can Buy
By Lisa Fogarty
Get Even More From Bustle — Sign Up For The Newsletter