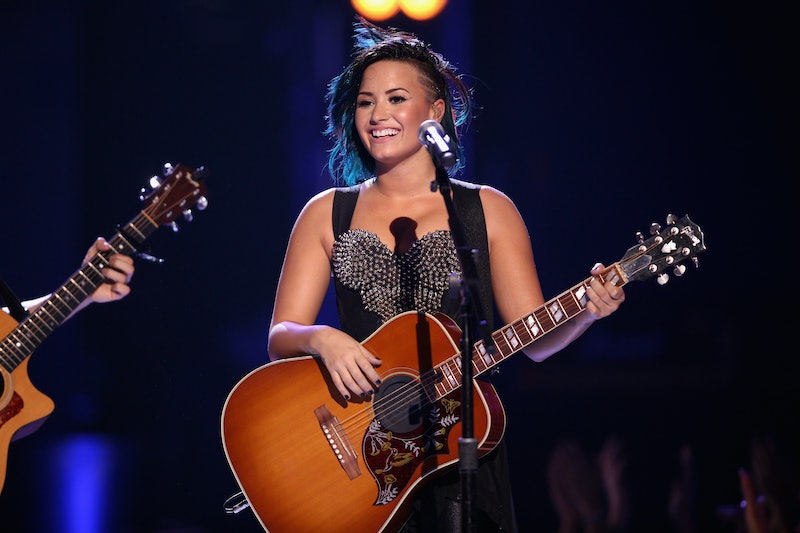 Prepare to never hear Jessie J's songs the same way again. During her show in San Jose, CA on Wednesday night, Demi Lovato sang Ariana Grande's part in "Bang Bang," making the crowd erupt in cheers so loud that they are both almost drowned out. Lovato not only hits all of Grande's high notes, but even has the same fun rapport with Jessie, dancing around stage and being coined the "bad girl" for the night. It's about time that they duet officially, and if they want to invite someone in to rap on the song too, may I suggest Iggy Azalea? Seriously, ultimate trio alert.

This isn't the first time that Lovato has slayed a cover songs during live performances. On every tour, she breaks out a new song or two, ranging from Ed Sheeran's "Give Me Love" to Mariah Carey's "All I Want For Christmas to You" to Rihanna's "Stay." Girl is eclectic. Although Lovato's own music is incredible, sometimes her best performances are when she's having a karaoke session onstage and belting out someone else's song. It's hard to narrow down her ultimate cover song playlist, but if I had to choose nine, it would be these songs.

Again, can they duet officially now? Get in the recording studio ASAP.

This is definitely on par with the Pitch Perfect cover.

The emotion in Lovato's voice is what really makes it.

Ed Sheeran — "Give Me Love"

Lovato keeps the original song intact, yet still puts her on twist on it.

Mariah Carey — "All I Want For Christmas Is You"

The raspy tone of her voice gives the classic Christmas pop song a unique new edge.

Christina Aguilera — "Mercy on Me"

This is from when Demi was only 16, and she belts out Aguilera's notes like it's the easiest thing in the world while playing piano at the same time.

Only Lovato could pull off twerking and dancing in this incredible outfit while singing the Jackson classic.

She just completely transforms this song. It's insane.

Chris Brown — "Turn Up the Music"

You've never heard Brown like this before, slowed down as a piano ballad. But then she turns it up for the version we all know.

Miranda Lambert — "The House That Built Me"

Because of course Lovato can sing country tunes, too.