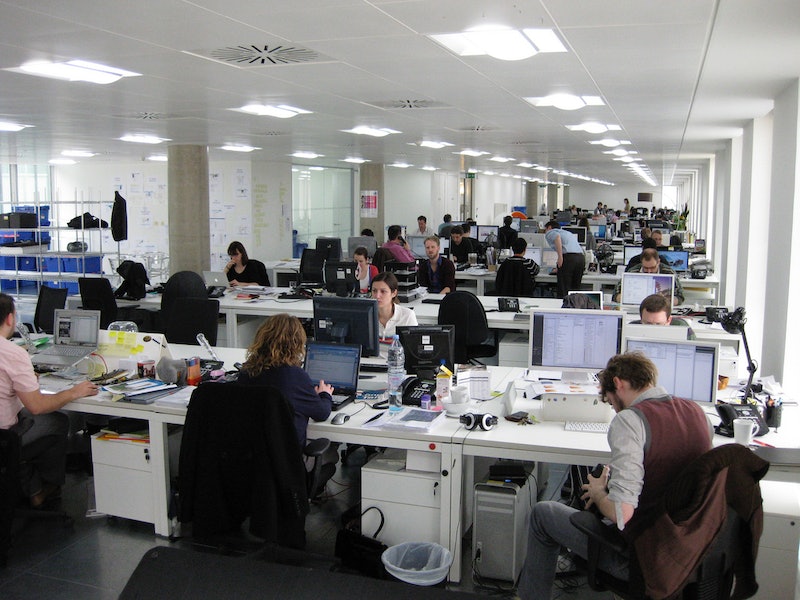 We’ve all worked with “that person” at some point in our professional lives, right? The annoying coworker who no one can stand? Maybe they have a tendency to goof off and expect everyone to pick up their slack; maybe they’re perfectly competent, but talk your ear off when you really need to be focusing yourself; or maybe they’ve just got some irritating eating habits. Either way, though, the only thing no one wants more than not having to deal with that person… is not being that person.

But hey, luckily Reddit is here to help. Our AskReddit thread du jour, posted by Redditor Tongus, inquires, “That annoying coworker — what does he/she keep doing?” The content sharing community has accordingly come out in full force to regale us with tales of the coworkers that rub them entirely the wrong way — providing us with loads of valuable lessons about how not to be that person. Honestly, most of them sound like characters from The Office, both the British and the American versions. I don’t know about you, but if I worked in a place full of David Brents, Michael Scotts, and Dwight Schrutes… well, let’s just say that I’d probably be brushing up my resume as we speak.

Ready to cringe? Here’s what not to do to ensure a happy, healthy work environment for everyone:

1. Making Every Call on Speakerphone

Speakerphone in public settings should be used for one reason, and one reason only: More than one person needs to be able to communicate with the person on the other end, and there’s only one extension available. And especially don’t carry out personal phone calls on speakerphone at work. No one needs to hear that.

Where do you go? And why? And how are you planning to get your work done so no one else has to cover your arse for you?

There are better people to talk through your problems with than your coworkers. Friends, family, a therapist… take your pick.

4. Gossiping About Your Coworkers

Why would you do that? It’s definitely going to come back to bite you in the arse eventually.

This one is a little more forgivable than some of the others; at least it’s not interfering with anyone’s ability to get their work done or anything. But I can still see how it would start to grind your gears after a while.

It’s probably a symptom of something else, but I would imagine it’s still difficult to get used to.

To be fair, I am a big proponent of questions. If you don’t understand something, it’s usually better to ask for clarification than just to let it go and hope for the best. Asking questions that have already been answered several times, however, demonstrates a lack of attention. Not so good.

8. Stealing Stuff from Other People’s Desks

If it’s not yours, don’t touch it — even if it originally came from the communal supply closet.

9. Not Respecting Other People’s Boundaries

You don’t need to be best friends with all of your colleagues; you just need to be able to work constructively and positively with them.

10. Being a Special Snowflake

This specific one happens to be a Special Snowflake: Parent Edition (and I’m sure there are fathers who do it, too, not just mothers). It’s awesome that you have kids and that you love them so much, but it doesn’t make you an authority on life; nor does it give you the right to talk down to people who don’t have kids.

But really, don’t be any type of Special Snowflake, parental or otherwise. It’s obnoxious.

There’s a fine line between keeping everyone in the loop and spamming everyone’s inbox.

12. Talking Someone’s Ear Off When They Clearly Have Work to Do

This isn’t limited to actual physical proximity, either. Even working from home, I’ve had co-workers who not only logged on hours, but also proceeded to IM me constantly about things not at all related to work…and then continue IMing me, even after I’d respectfully ask them if we could chat a little later, as I was currently in the middle of something. It’s immensely frustrating — especially when they start getting huffy just for telling them now isn’t a good time for chitchat. Pardon me for wanting to spend my work hours actually, y’know, doing my job.

Clip your nails at home, shower at home, and brush your teeth at home (unless you’re doing everyone a favor after eating tuna for lunch, in which case brush your teeth in the bathroom and clean up after yourself). This should be a no-brainer. Oh, and as is the case with subway eating, leave the smelly foods at home.

More like this
These Are The 3 Most Mellow Zodiac Signs
By Kristine Fellizar
An Open Letter To The Person Who Bought Steve Jobs’ Birkenstocks For $218,000
By Ginny Hogan
8 Money Saving Experts To Follow For Accessible Advice
By Maxine Harrison
Emily Ratajkowski & Pete Davidson's Astrological Compatibility, Revealed
By Nina Kahn
Get Even More From Bustle — Sign Up For The Newsletter