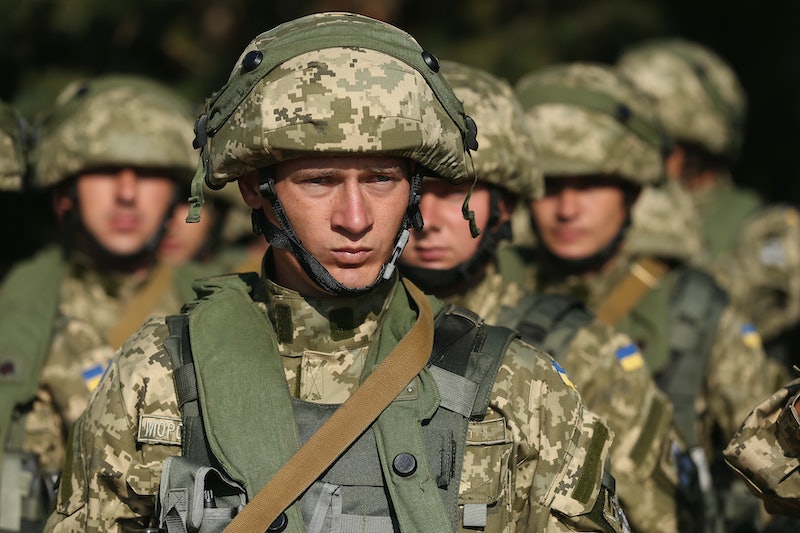 All of us who haven't been living under a rock know that hyper-masculine fields are hard for women to break into, but a new study shows that some men also stay away from jobs with a "macho" culture. Researchers at the University of Exeter have found that hyper-masculine stereotypes associated with certain fields drive away many men who don't see themselves as "man enough" to join.

Restrictive ideas about how men should act in a certain field are as old as can be. Remember the whole Miami Dolphins NFL hazing scandal? Talk about a profession working like a fraternity. It shouldn't really come as a surprise that some men aren't on board with this highly gendered workplace culture, but now science has finally confirmed it all for us.

The recent two part study, published in the British Journal of Psychology, looked at 218 recruits for the Royal Marine (the UK's Commado force) and 117 male surgical trainees. These two fields are heavily male-dominated: women are officially excluded from the Royal Marines — a ban that has actually been upheld by the European Court of Justice, believe it or not — and only make up around nine percent of surgical consultants in the UK.

Researchers found that those who didn't perceive themselves as being "man enough" in their male-dominated field were more likely to leave the profession, perpetuating the hyper-masculine culture that tends to keep women out.

"Women have made substantial inroads into some traditionally masculine occupations, but not into others," said Professor Michelle Ryan of the University of Exeter. "There is evidence that the latter group of occupations is characterized by the hyper-masculine 'macho' stereotypes that are especially disadvantageous to women."

Researchers found that those who didn't perceive themselves as being "man enough" in their male-dominated field were more likely to leave the profession, perpetuating the hyper-masculine culture that tends to keep women out.

These findings suggest that opening up these occupations to a wider range of men could encourage more women to join. Really, this study just reinforces the obvious fact that not many of us want to work in a field that bullies people into being stereotypically manly. But this study does tell us something we don't hear often enough: sexism in the workplace affects all of us. It's high time to get rid of gendered workplace stereotypes and open up these fields to all men and women.

More like this
34 Quotes That'll Inspire You On Juneteenth & Beyond
By Syeda Khaula Saad and Siena Gagliano
How To Fight For Reproductive Rights, Based On How Much Time You Have
By Courtney Young
How To Protect Your Digital Privacy If You Need An Abortion Post-Roe
By Kaitlyn Wylde
How to Delete (or Pause) Your Hinge Account
By Emma Carey
Get Even More From Bustle — Sign Up For The Newsletter