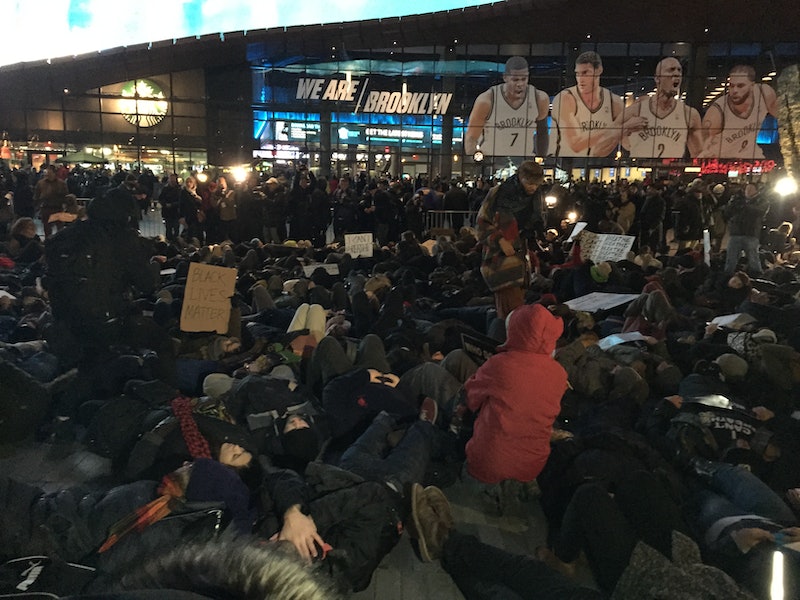 English royalty felt the wrath of New Yorkers over the no-indictment vote for Eric Garner's killer, as NYC protestors demonstrated outside the Barclays Center on Monday night while the Duke and Duchess of Cambridge — Prince William and Kate Middleton — attended a basketball game between the Brooklyn Nets and the Cleveland Cavaliers.

It's the British royals' first NBA game, and demonstrators had planned to shut down the event. A Facebook event, "Barclays Stadium, SHUT IT DOWN" described its goal to close down the area surrounding it. Pictures of the demonstration appeared on Twitter alongside the hashtag #RoyalShutdown.

Security was expected to be tight in anticipation of the protests, as the city entered the second week of fury following a Staten Island grand jury's acquittal of Officer Daniel Pantaleo in Garner's death. Since last Wednesday's announcement, NYC has erupted in protests, along with many cities across the U.S. Many questioned the grand jury's decision, especially because video evidence of Pantaleo putting Garner in a chokehold exists. Pantaleo's acquittal came in the wake of a similar decision by the Ferguson grand jury to not indict former police officer Darren Wilson for fatally shooting an unarmed teenager, Michael Brown.

Monday's protests in NYC saw an incredible crowd gathering at Barclays Center despite the bitter cold.

The protest carried on inside the stadium as well. Living up to a statement before Monday's game, LeBron James wore a shirt emblazoned with Garner's last words: "I can't breathe" — which was also a rallying cry for the protestors.

James is not the first NBA player to express solidarity with the protestors. Derrick Rose of the Chicago Bulls wore a similar shirt, as did Detroit Lions' Reggie Bush.

Monday night's demonstrations comes in the wake of NYC protestors shutting down the Verrazano-Narrows Bridge earlier that day, bringing the morning commute traffic to a standstill.