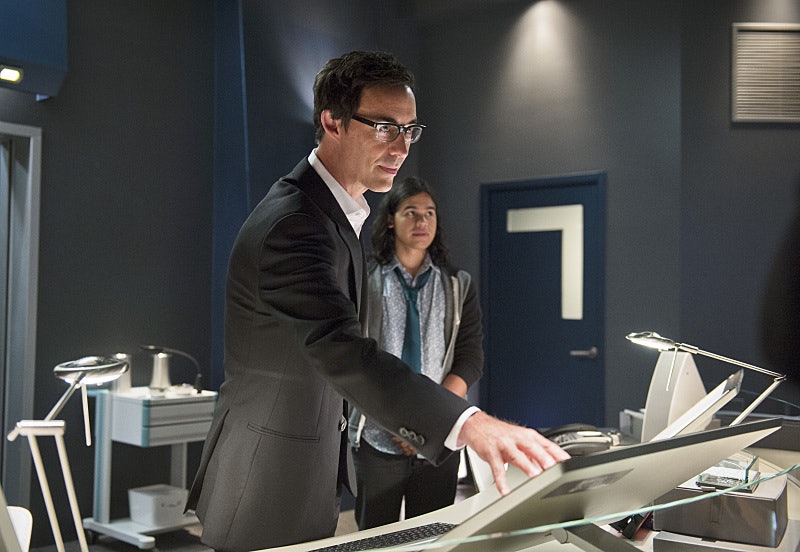 We can talk about Harrison Wells and his mysterious motives and backstory all day long, but everything about him boils down to one simple question: is there any way Harrison Wells could be Reverse-Flash, the long standing enemy of The Flash? It's an idea that has been highly debated (and argued) since the very first episode of The CW's The Flash , and now with Tuesday night's midseason finale, we are inching towards an unmasking of that "yellow lightning with a yellow man inside," the blur that Barry saw kill his mother many years ago. Knowing what we know about Wells so far, and knowing what we know about Reverse-Flash, the two just might be one in the same.

Reverse-Flash, in DC Comics, has this strange, idolizing fascination with The Flash, which is basically what ends up driving him to become Barry's greatest enemy. While we haven't seen the great magnitude that it happens in the comics yet, we have seen Wells be super supportive of Barry, and then disappear into his strange futuristic cave to basically fangirl over Barry in a weird way. Wells needs Barry to stay on a very specific course — as we saw in the episode "Power Outage" — and Wells is going to stop at nothing to make sure that happens. Why?

Maybe Wells really does have Barry's best interest at heart. Or, he's simply setting up for a cosmic showdown later on in life. From what we've seen so far on the show, I strongly feel that the powers that be behind The Flash are taking some liberties with the characters, one of them being Wells/Eobard Thawne/Reverse-Flash/Professor Zoom, who literally might turn out to all be one in the same. I don't think Wells is necessarily from the future, but rather he's already traveled there, and has seen what Barry becomes, what happens to Barry, and what happens to himself (traveling to the future makes a lot more sense than traveling back from the future on the cosmic treadmill). Wells knows he's going to have an all out battle with The Flash one day, and he's making sure that Barry sticks to that course. Wells could very well know he defeats Barry, thanks to that handy futuristic newspaper, and as long as Barry does everything he's told until then, Wells will win and become the all powerful metahuman for Central City.

I've said it before and I'll say it again, Wells is shady. He's up to something, but none of us know exactly what it is yet. He's determined to keep Barry on this path, but none of us know why. I'm still not entirely over the fact that Wells killed Simon Stagg, because I saw Stagg as a huge ally for Barry later on. But Wells had other ideas, and he needs to know that these "other ideas" are the right ones, otherwise he's acting irrationally and might not be a secret metahuman after all, but simply crazy.

And, all of this craziness points to one outcome: Wells has been Reverse-Flash all along. It's Oliver Queen who tells Barry that the lightning "chose him," but that choice could have been heavily influenced by none other than Wells. Wells has been putting the pieces in place for Barry to become The Flash since day one, and now he's going to stop at nothing to make sure it happens. Barry just doesn't know it yet.